This one goes out to the mamas

With a special shout-out to Jmama!

This probably doesn't deserve a post of its own, but I went to visit my friend L and her new baby boy this weekend. After reading Jmama's post about how to make chicken stock, I knew I wanted to make my very own homemade chicken soup - with homemade chicken stock. And since I love to take food over to new moms, I thought this would be perfect. 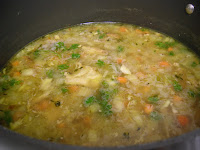 I also brought over some tortellini and stew. Just in case you want to make these at home: 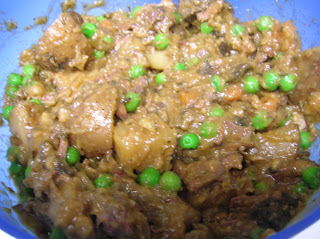 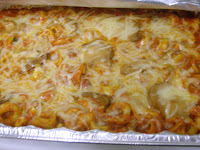 L and her husband really appreciated the mass quantities of food I brought over. Apparently food was delivered on a fairly regular basis when "Nemo" was born, but now that he's a whole 5 weeks old there's a lot less and poor L worries that it won't be long before she has to start cooking again. L's husband especially loved the tortellini, so I feel confident recommending it (like most Giada recipes).

And Nemo? What a sweetie. Poor thing was unbearably hot due to the unseasonable heat, but as long as I kept blowing on him he was pleased as punch just to be held. When Nemo was first born he was the spitting image of L. I joked with her that he could have been immaculately conceived. But now that he's a little older he's starting to look more like his dad.

It was great to see Nemo before I moved and catch up with L. She's been so tired during this whole last month since he's been born we haven't had a lot of time to talk, but this was the opportunity to make up for it! It was a little ominous how she kept telling me how I should put off having a child for as long as humanly possibly, but I'll blame that on the fact that she hasn't had a full night's sleep in 5 weeks.
Posted by That Girl at 2:51 PM