How to get a husband out of bed 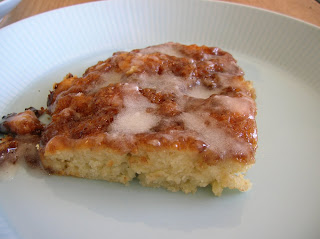 When you're selling a house, or having someone over, the experts all agree you should put something with cinnamon in the oven. The smell fills up the kitchen, and if you live in a tiny little apartment, it drifts into the bedroom and wakes up your husband.

I woke up this morning wanting to make Jon breakfast. Last week I was awoken with breakfast in bed (and this time he even cleaned up...which was a first considering usually he leaves me all the pans and dishes). It was time to do something nice for him. There have been a bunch of cinnamon roll recipes floating about and I thought he would love that. The only problem? Rising time. I'm no stranger to yeast, and it doesn't scare me but I do know its hard to throw together something which has yeast as a central ingredient. So a little more searching led me to the Fleishmann's website which had a cinnamon roll-like recipe that took less than an hour from beginning to breakfast.

Only problem? I didn't have 2 packets of yeast on hand. I'm trying to use up what I had so I can buy the "good stuff" in the bottle so I only had 1 left. No worries, I'd just halve the recipe. I didn't need to feed 9 people anyway.

Yeah...this wasn't my most brilliant idea. I mean, it was a good thought, but I didn't go all the way - which is often my problem. I shouldn't have made this in a loaf pan because the 8x8 was just too big! Which meant, instead of becoming a cinnamon cake, it became a cinnamon pizza. And some pieces burnt right to the side of the dish - which is always fun to clean... 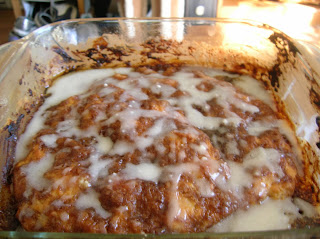 The good news is, this was the best cinnamon pizza I have ever had. Jon loved it and was so thankful I'd made some extra icing because he loved it so much. There's a high cinnamon to dough ratio making this a very rich breakfast.

If you want to make this, you can find the recipe here. However, here's my words of advice:
1) Don't halve it. BUT
2) If you're going to halve it - make it in a loaf pan. This would make an excellent coffee cake/sweet bread.
3) The recipe says to let it cool before putting on the icing. That's a really good idea, because if you don't the icing melts as you can see from the pictures.
Posted by That Girl at 2:53 PM