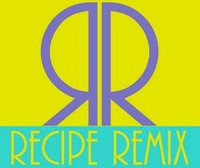 I feel a special loyalty to bloggers whose blogs I read. So when one (or two) of them decide to host a blogging event, I feel it is my duty to contribute. Partly because how sad would it be to throw a party and have no one show up? Not that that's a worry for Robin or Danielle. I'm sure they'll have no shortage of entries in their new blogging event: Recipe Remix.

The idea behind the event is to take classics and change them up a bit. Get it? Remix? They posted a list of six "staple dishes"

The entrants then take "that dish to a different creative level."


As soon as I saw the list I knew I wanted to make the grilled cheese and tomato soup. It was one of my favorite meals growing up and I hadn't had it in ages. There were only 2 problems. 1) Jon hates grilled cheese and tomato soup. Sorry, I should clarify. He hates tomato soup. He loves grilled cheese.
2) This weekend when I planned to make it, the weather soared into the 90s. UGGGHHH. So not soup weather. I wanted something cool and something I didn't have to make in the oven that would heat up our entire apartment. But who ever heard of cold soup? And then I remembered. GAZPACHO!!!! Cold tomato soup. Perfect! I checked my fave cookbooks and sure enough, B&G came to my rescue once again. Once I decided on gazpacho I was literally dreaming of fresh tomatoes. I love tomatoes, I love the smell, I love the taste - it was almost unbearable not to take a big bite of my tomatoes before chopping them up. 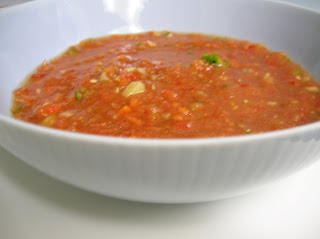 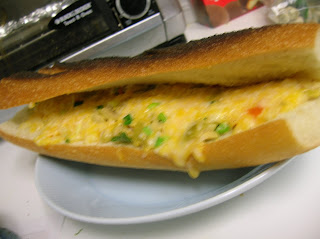 To go with my Spanish summer soup, I wanted an equally Spanish grilled cheese. So why not add Spanish olives to my grilled cheese sandwich? Why not indeed. Now may be a good time to tell you we never had true grilled cheese sandwiches growing up - not that I ever knew that. See when I was growing up, my parents called healthy things by unhealthy names so I wouldn't know I was eating healthy. For instance, they convinced me that "cookies" were actually crackers up until I was in elementary school. To this day I still call frozen yogurt "ice cream." And "grilled cheese"? Well Jon informs me that what my family calls "grilled cheese" is actually known by the rest of the world as "toasted cheese."

Well as Shakespeare said, "What's in a name, it's the taste that matters" or something quite similar (because in reference to that quote my changing makes the scene a little racier). And the taste? While Jon wasn't a huge fan of the olives in his grilled cheese, he loved the Gazpacho. He complemented the flavors, the texture, the spice, he even had seconds! (Either I make amazing soups or my poor husband isn't getting enough food on a regular basis since this is the second time this week he went searching for seconds).

As for me, I liked the added tang the olives gave the sandwich, but I do love salty additions. And the Gazpacho? I can't think of a nicer treat to the end of a long hot April day. 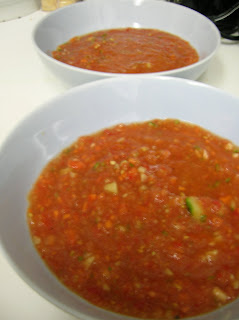 1) Combine tomatoes, cucumber, onion, pepper, carrot, and celery in medium bowl. Working in batches, pulse in food processor until mixture is combined and chunky. Transfer each batch to large bowl.
2) Add tomato juice, vinegar, olive oil, tabasco, salt, and pepper to bowl and stir.
3) Cover and refrigerate 4 hours-overnight (I didn't read this step until it was too late so we put it in the fridge, took Ringo to the dogpark, came home and made the toasted cheese sandwich and then took it out of the fridge. It tasted great anyway. So there.) 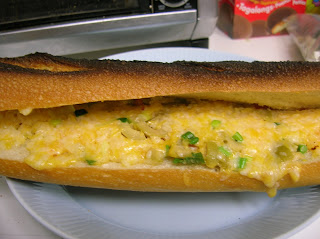 1) In medium bowl, combine cheese, olives, sour cream, scallion, and tabasco.
2) Season with salt and pepper and spread on baguette.
3) Toast sandwiches until cheese has melted.
Posted by That Girl at 6:31 PM