The wing's the thing 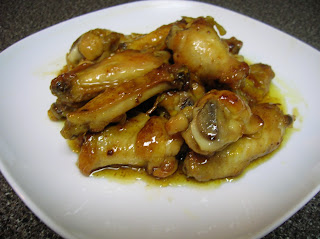 There's just something about chicken wings that makes them irresistible. Normally I prefer mine doused in spicy buffalo wing sauce and then dipped in creamy, tangy blue cheese - but really, I'm not all that picky. The variety of flavors that can be packed into these little numbers makes them a fun and easy meal. And I'm not the only one who thinks so as more and more "wing restaurants" pop up around us.

These were supposed to be both sweet and hot, but I was a little too conservative with the Franks red hot, so they came out more sweet then hot. Don't make the same mistake if you want a little kick with your wings. Even though they weren't spicy, these wings had us both licking our finger and Thatboy was very impressed with the fact that these were homemade and not storebought, which is always a compliment! (Side note - does anyone else notice the GAS RANGE the pan is sitting on? Love it.) 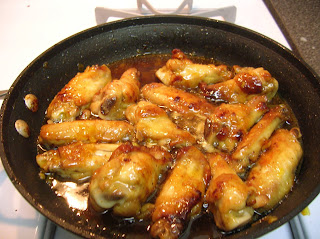 1) In large ziplock bag combine salt, pepper, and chicken.
2) In large skillet cook butter and chicken over medium heat until throughly cooked, about 15-20 minutes. Remove to plate and keep warm.
3) In same skillet, bring marmalade and Franks red hot sauce to boil over high heat.
4) Return chicken to skillet, reduce heat to low and simmer, tossing to coat, 5 minutes or until heated through.