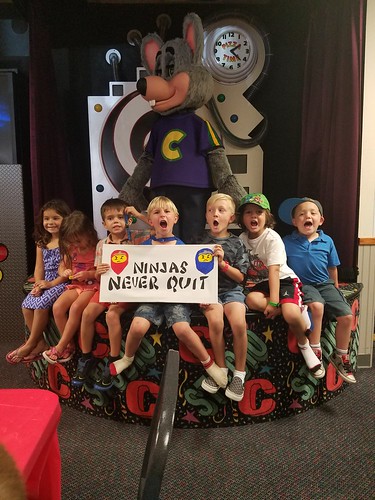 Yesterday, at exactly 2:42 in the morning, Thatkid turned 5 years old.  And as a weird twist of fate, or just because that's how these things work, at that exact moment I was walking from Thatbaby's room after putting him back to sleep.

I had no trouble refraining from waking him up to commemorate the occasion.

He awoke to the usual birthday fanfare.

"Awoke"/"Was Awoken"  same thing right?  During his first mid-night bathroom trip I heard him discover the streamers.  A sharp, scared gasp as he walked right into them. 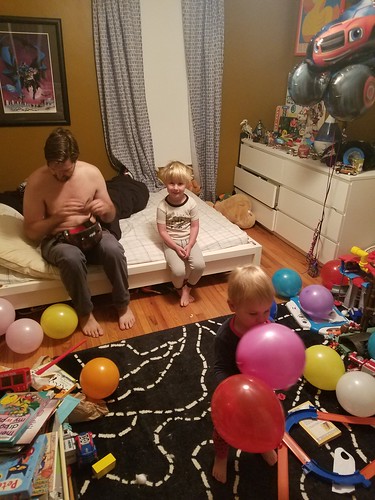 And he got his first present of the day.  A pretty big one.  It was the only thing he asked for. 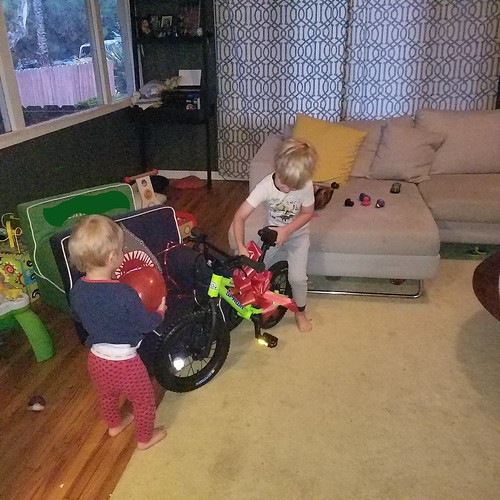 He had a special request for breakfast, chocolate chip pancakes at the Original Pancake House.  But when we told them it was his birthday, they brought out more than just pancakes. 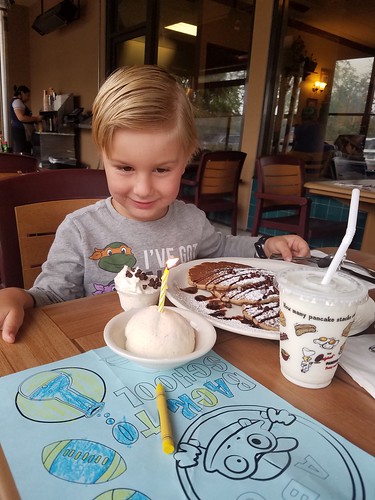 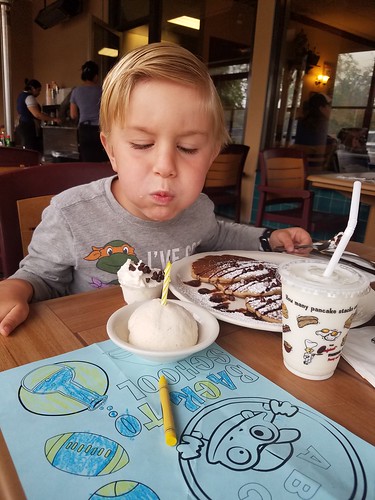 We had just enough time after breakfast to go home and try out his new birthday bike (and helmet) before heading out to his party! 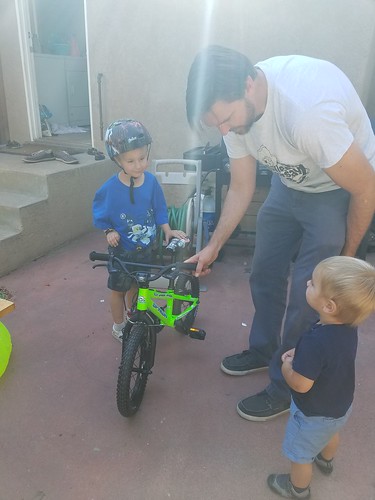 At the very beginning of 2015 we attended a birthday party at Chuck E Cheese.  And ever since, Thatkid has decided he wanted his 5th birthday party there.  We tried to convince him to have it at home, promising all sorts of bells and whistles.  But it was not to be.

And I have to say, for a place that pretty much lives on parties, they were not easy to work with.  The week of the party, their phone lines went down.  They were completely unreachable.  Calling non-direct numbers didn't work.  After being forced to listen to over 10 minutes of menu and information I got a person...who gave me the same non-working number.  When I told him I'd been calling for days, he informed me that the only way to get any questions answered was to drive over to the location.  Which I did.  Only to wait for 20 minutes before a manager could be found.  Because no other employee knew anything about parties.

Yesterday, we showed up 15 minutes early to set up, and our "designated party host" showed up 15 minutes late....15 minutes after the party had started.  As our guests hung around waiting to get started since the host is the one who hands out the means for the kids to play.   But that wasn't the only time party "ran late."  After finishing their pizza, the kids got antsy, waiting for cake.  But no cake, because they were running behind, so it would be another 10 minutes.    And of course, there was only one working ticket machine, waiting for half an hour for someone to man the prize counter, and then more waiting for someone to check and make sure we were leaving with our own kids before we could finally leave the place.   In other words, nothing about this party made me change my mind about Chuck E. Cheese.

But Thatkid and his friends had a great time.  Despite being at Chuck E. Cheese, Thatkid really wanted a Ninjago party.  So that's what he got. 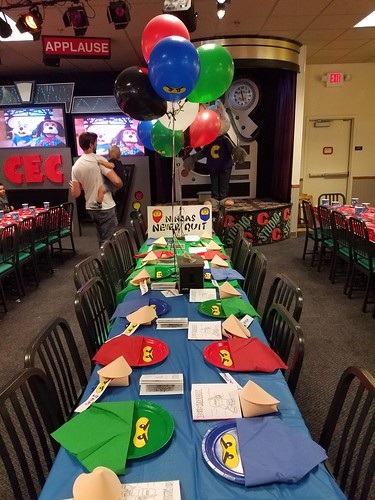 I know nothing about Ninjago.  Thatkid doesn't watch the show, doesn't own any toys, and really, it hasn't been a hot "party theme" since 2014.   Plus, I was a little limited by the venue.  But I did what I could! 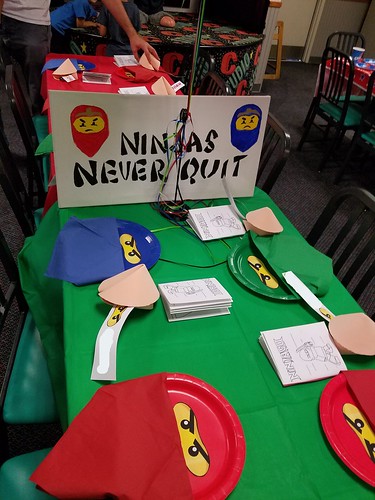 The key to a Ninjago party is eyes and color.  There are 5 different colored Ninjago - Red, Green, Black, White, and Blue.  So little eyes poking out of any of those colors becomes a Ninjago! 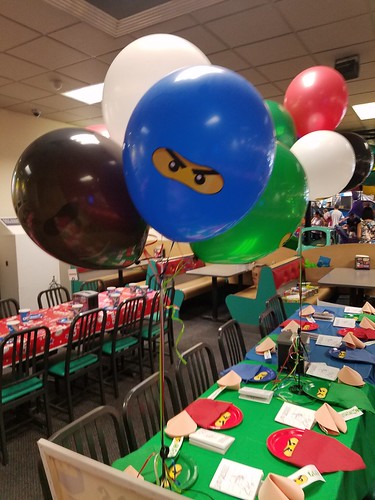 The place settings featured a plate and a fortune cookie favor. 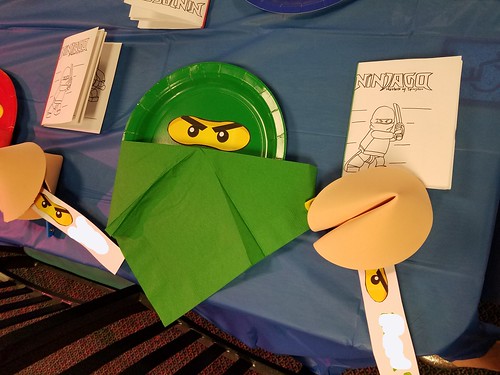 The plates got a really easy Ninjago dressing, with those indispensable eyes and a napkin wrapped like a ninja mask. 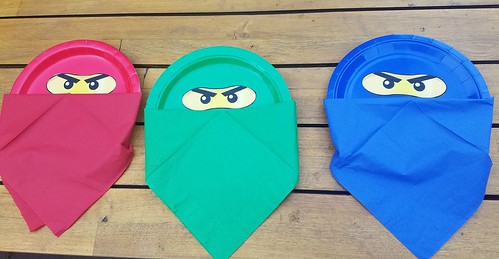 I made the favors out of circles of foam I shaped into fortune cookies and added a "fortune" with the eyes and each child's name.  They were stuffed them with Ninjago goodies. 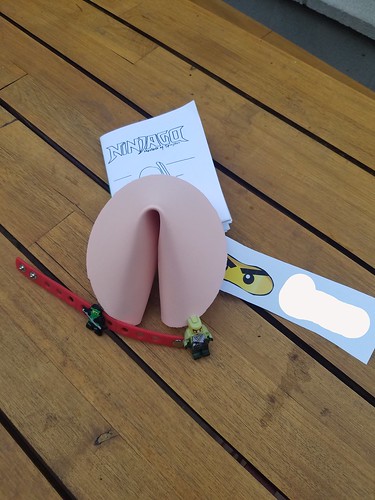 Each child got a Ninjago bracelet I ordered from Super Mommy Shop.  The kids loved these and shortly after getting to the table, each child was wearing one. 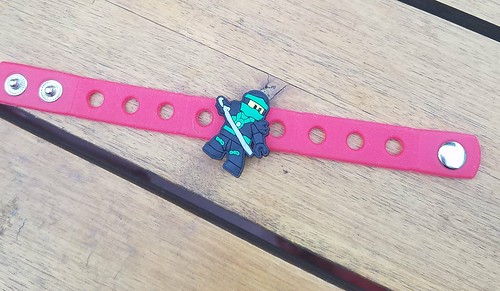 Each child also received a Ninjago crayon made by CynsSensations.  How amazing did these turn out?  I was super impressed by the level of detail in each crayon.  And the kids didn't even realize they were crayons at first!

To go with the crayon, I printed out coloring books.  They didn't fit in the fortune cookie, so I tucked them in beside. 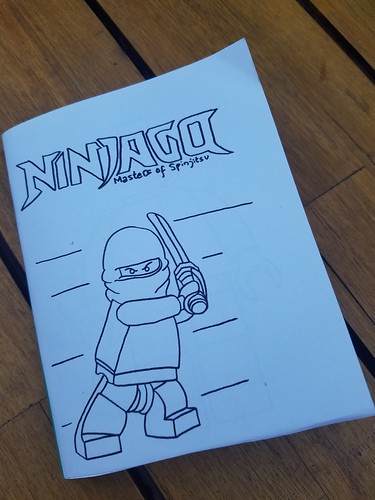 The kids started off playing the games and then we rounded them up when it was time for pizza! 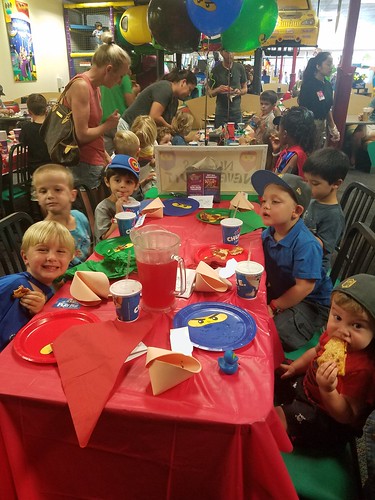 The animatronic Chuck E Cheese kept all the kids entertained, even Thatbaby.  Well, that and his water cup kept him a pretty happy camper for almost the whole party. 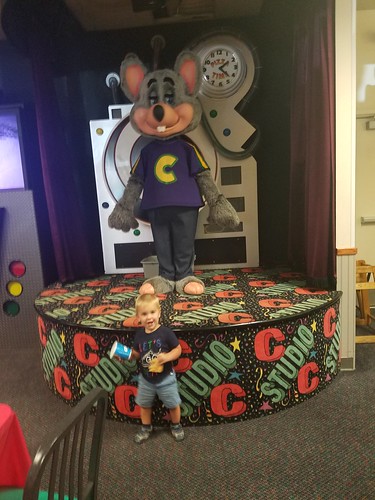 Cake time at Chuck E Cheese is also "show time" where they bring the birthday kids up for some singing, dancing, and tom foolery. 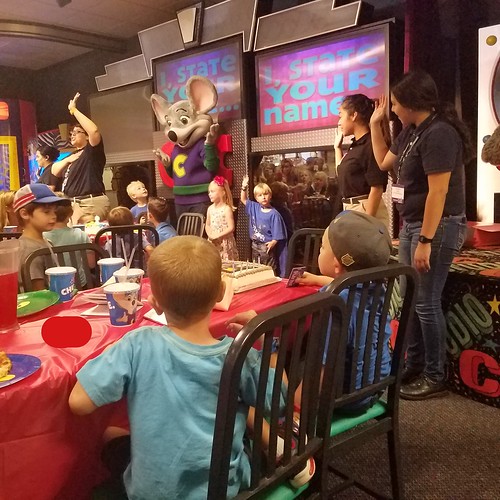 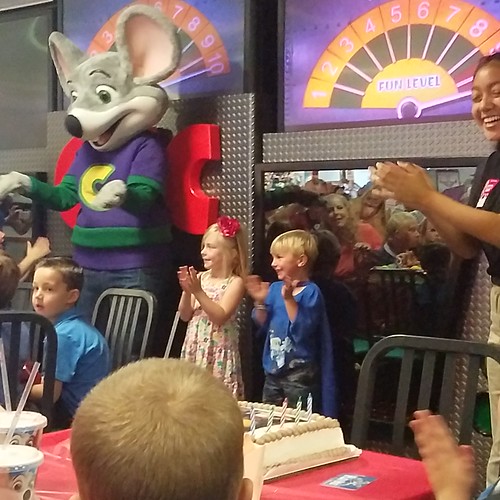 But finally it was time to blow out the candles and make a wish. 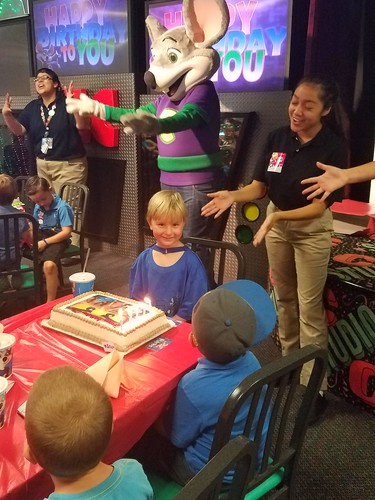 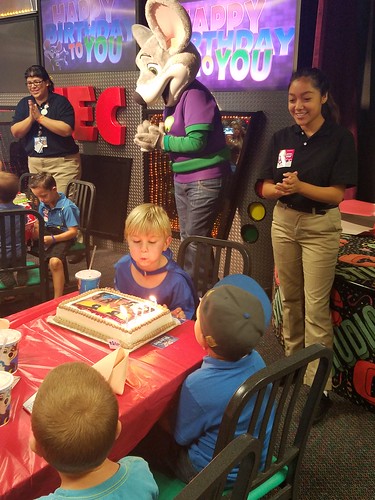 Chuck came by for pictures.  And apparently being 5 means Thatkid is no longer afraid of costumed characters.  My how they grow. 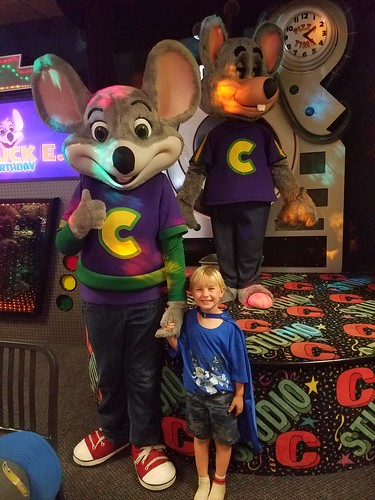 And he got a turn in the ticket blaster.  Which he did not understand.  He kept grabbing tickets and letting them go. 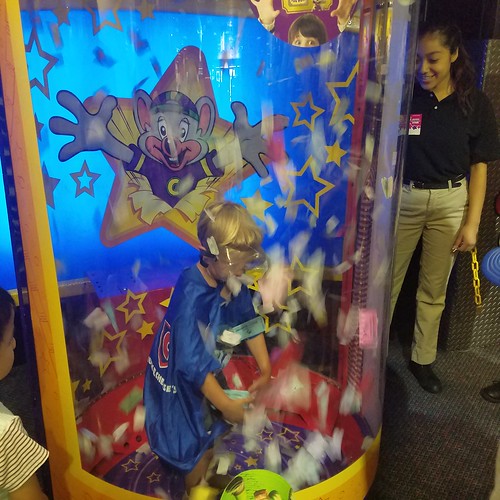 Then there was a little more time for games before it was time to wait in lines.  I mean.  Get tickets, prizes, and go home. 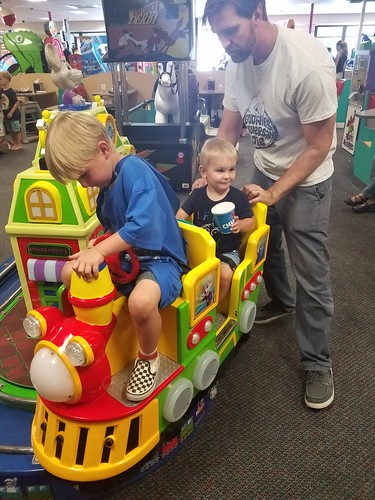 In addition to picking out prizes for himself, Thatkid also got his brother a kazoo. 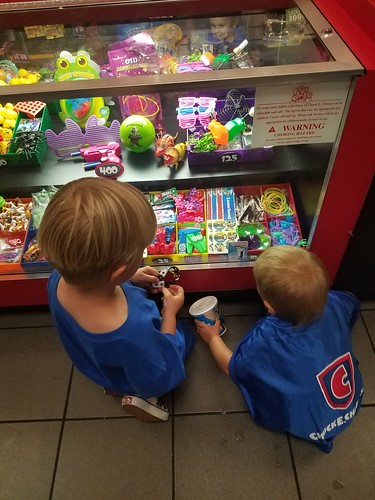 Which Thatbaby adored.  Until we exited the parking lot.  And then?  Well, by that point Thatbaby was done. 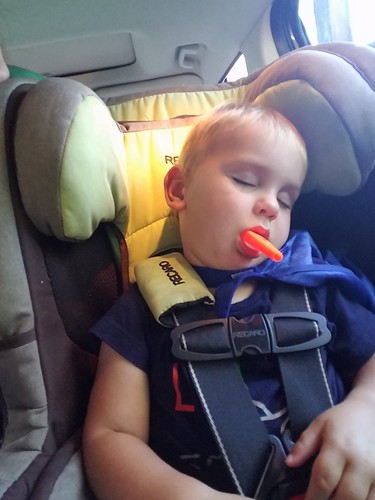 We went home and took naps and opened presents, and then it was dinner time.  Despite having pizza for lunch, the birthday boy requested going to his favorite pizza place for dinner. 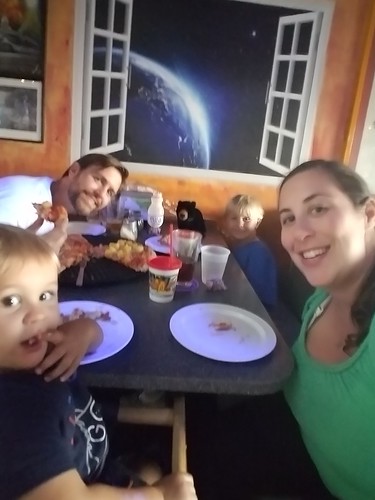 Then he came home and cuddled up with some of his new treasures.  Looks like a pretty successful day right?  I live for giant birthday smiles. 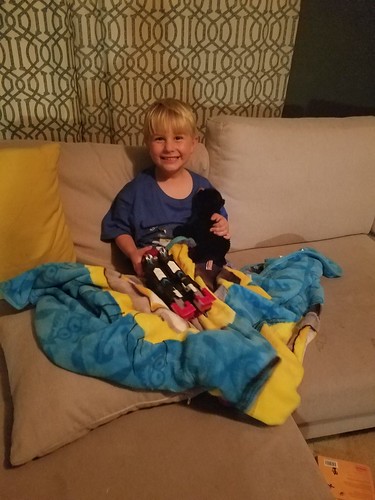