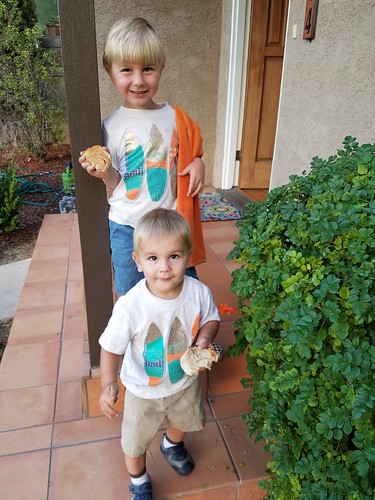 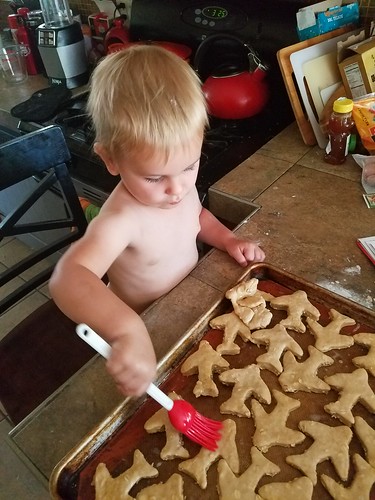 Sleep:  Sleep is a game.  It is somehow inversely related to the time I go to bed.  I've been up late recently to get things together for birthday parties, out of town visitors, or general prep.  On those nights, he sleeps all through the night, no wakeups.  Nights I'm able to get myself to bed early?  He's up and often.  He's still doing two naps on the weekend, especially on Saturdays on the way to soccer, but all his naps are short, we're lucky if he makes it an hour.

Eating: Thatbaby has had 2 phases this month, first was the hollow legs stage, where the kid just ate and ate all day.  Packing away more than his brother.  And then, probably teething related, he stopped eating.  He was crabby by the time dinner rolled around and would either throw his food on the floor, or only eat on my lap.  His favorites this month include watermelon, tamales, lettuce, and cheese.

Best Moment: Thatbaby has learned to race!  This is a big deal in our family, obviously.  It's fun because it's something he can do with his big brother, which is why I love it so much.  They press themselves against the wall as I call out "ready, set, go" and then the two of them take off.  He has the hugest smile, which I think is because he loves running, the fact that he understands what's going on, and his brother is right there beside him. 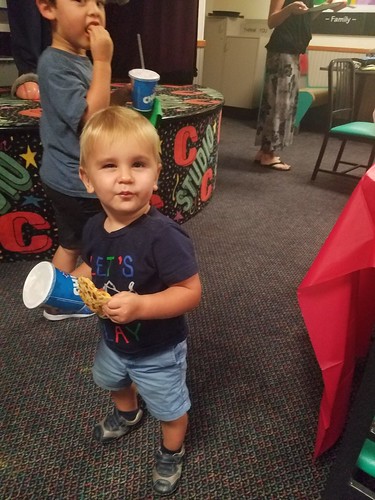 Monthly Wisdom: I want my boys to grow up and be smart, handsome, talented, funny, and creative, but most of all, I want them to be kind.  We've been talking about this a lot in Thatfamily this month.  And I think it's applicable even as young as 16 months.  Thatbaby is at an age where he learns from example, so it's important that Thatboy, Thatkid and I all model kind behavior.  We also have the added benefit of having a dog in the home, so he is learning how to be kind in that sense too.


Goals for the Upcoming Month:
- We've got a hearing test next week due to the speech issues I discuss below.

Things Thatbaby is doing:
- As I mentioned last month, Thatbaby talks up a storm, but it's very much his own language.  He does intonations rather than words.  So we know when he's saying "What's that?" "Thank You" "There s/he is!" just by the inflection of his tones.  Other words like "ah duh" (all done) "dih guh" (tickle), "ab boo" (apple, which really means any food) "boo" (blue) and "ha" (either hat or hot, depending on context) are close but slightly off.  I brought it up to his pediatrician and asked if it was possible that he has a hearing issue which makes it harder for him to understand words and therefore speak.   While there's nothing physically wrong with his ear mechanisms, he didn't think it would hurt to refer him to audiology, since he hasn't had a hearing test since birth.
- Another molar, bringing our total up to 10!
- Racing - which I talked about before.  My little runner boy.
- Slides!  Thatbaby has discovered the wonder of slides, and he thinks they're great.
- First haircut!  He looks like such a big boy now.  I mean, he always looked like he'd be buying his friends beer, but now even moreso. 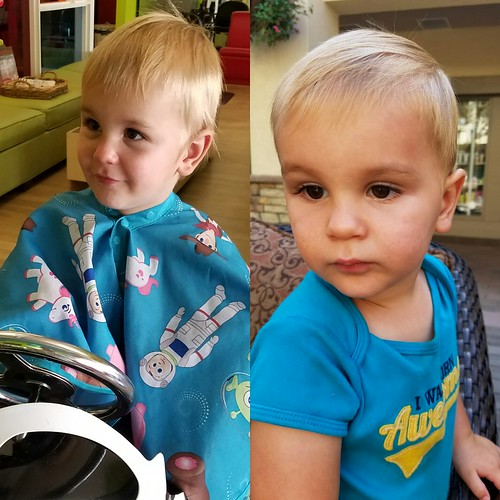