This race gets me every year.  I love this race, but every year it manages to be a giant cluster.....well, you know where I'm going with this.

This year was going to be different.  Thatkid was older, so he wouldn't be such a mess, waking up from his nap to run it. He could nap after, on the way home!  Plus now he's a race pro.  And because Thatbaby was going to be with us, we'd have the stroller.  So even if Thatkid got tired, he could hope on the stroller.

Kink #1 - TMIL planned her October trip the week of the race, and wasn't leaving until the day after.  And TMIL is not a racers.  No way she could do 3 miles.

Kink #2- Thatkid got invited to a friend's birthday the morning of the race.

No problem.  I'm supermom.  We can do everything!  Except that never works out.

I planned to leave the party at noon, giving us an hour to get to the race before the 1pm start time.  Except when noon rolled around, Thatboy first started taking Thatkid around to say goodbyes and use the restroom.  And Thatkid decided he hated girls and didn't want to say goodbye.  So we didn't actually hit the road until 12:20.  At 12:48 we were still on the freeway and Thatbaby, who has been phenomenal in the car lately, decided today was the day he was going to scream the entire trip.  So Thatboy dropped the 3 of us off at the start and took his mother to locate a parking spot.  He was then going to set her up somewhere on the beach and then come and join us on the race course.

We got out of the car, I strapped Thatbaby on so he could nurse, pinned Thatkid's race bib on, and we headed to the start as they announced "90 seconds until we start."

The gun went off, and so did we! 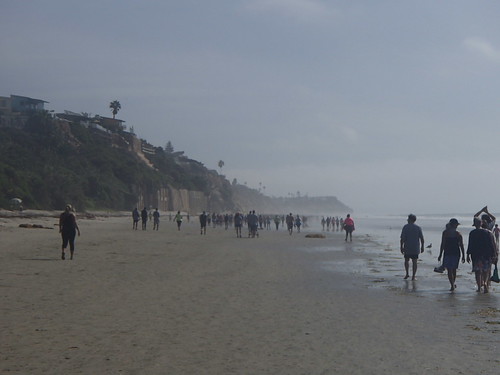 But because I was nursing Thatbaby, instead of having him in the stroller, there was no running.  Once he finished nursing, I ran a little with Thatkid who, because he hadn't napped and was in a mood, began crying he was tired, wanted his dad, wanted the stroller, wanted to go home.  We pushed on, walking, with promises that once we got to the turnaround, and started heading back, I'm sure we'd run into Thatboy.  1.5 miles is a long time when your soundtrack is constant whining.    Well, 1.4 miles.  Just before the turnaround, Thatboy caught up with us.  And from then on it, it was smooth sailing. 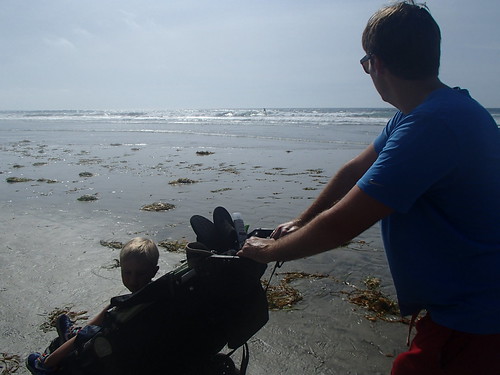 Almost.  I mean, I hadn't been expecting to wear Thatbaby at all during the race, let alone for the whole thing! 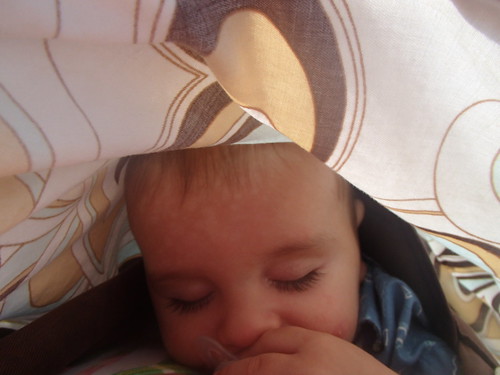 What I will say about the race is that it has completely hit it's stride.  This is the 3rd year of the Surfing Madonna, and having run it every year I can say with certainty that this was the best year.  It was organized much better than previous years, even down to starting on time!  And the course, which usually had you turn around before halfway, then run past the finish, turn around again and head up to the finish was much improved.  A straight shot down the beach for 1.5 miles, turn around and head back.

And the medal this year was huge!  Easily as large as Thatkid's head! 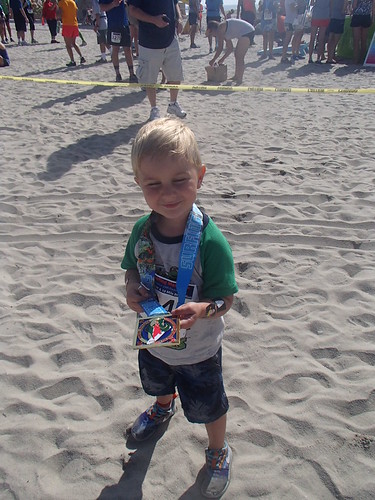 So next year, I'll definitely be back.  And with a 1 year old in tow, you can almost guarantee it will be another disaster!