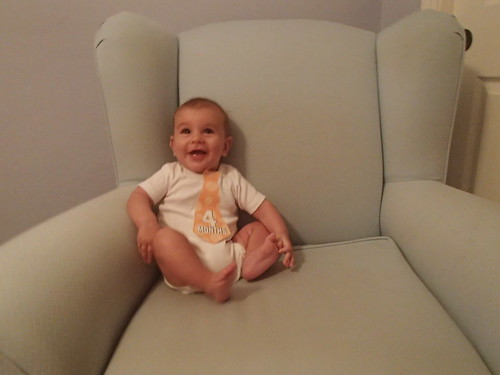 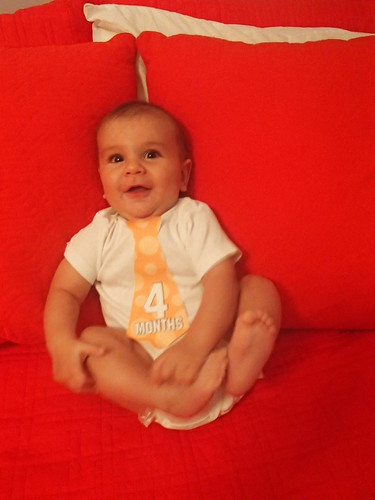 Sleep:  This month was going pretty well with sleep.  We successfully broke the swaddle and now he doesn't need it.  One wakeup between 2 and 3, then back to bed until I woke him at 6:30 to eat and go to daycare.  And then, the week before he turned 4 months old, he decided that 5:15 was a WAY better wakeup time.  Spoiler - it's not.  That's the time I use to get ready for work!  But then, the night before he turned 4 months he didn't wake up - at all!  Once I put him in his crib, he slept...until 5:15, but those uninterrupted hours made me not so upset about that.  He's been sleeping in his pack and play at daycare, which I know the daycare provider really appreciates!  His naps still vary.  Sometimes he catnaps, and other times he does nice long naps.

Eating: Struggling a bit.  We upped his bottles, so he's now taking 4oz in a bottle - 16oz a day.  And I'm pumping 14 oz a day.  So I've added in an evening pumping session, which I hate, but it's not a huge sacrifice in the scheme of things.  And now the daycare provider has asked me to go up a nipple size, which makes me nervous, so I'm really hoping everything works out.  We've also entered the distracted dining phase, where he pops off the breast a million times in a nursing session to see what else is going on.

Best Moment: This month Thatbaby has really discovered his older brother.  I love it.  I love watching him light up when Thatkid enters the room or starts talking.  I love the way he gazes at Thatkid as though he's the sun, moon and stars.  Thatkid already adores his little brother, so it's nice to see the reciprocal. 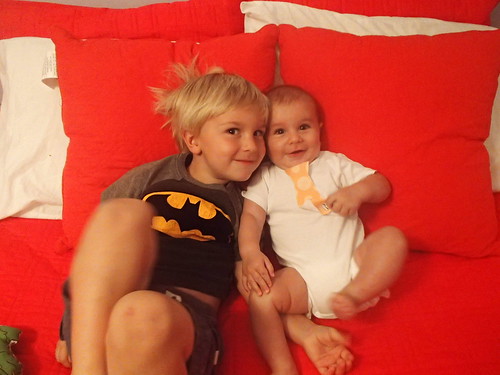 Monthly Wisdom: 4 months means we're entering the "wakeful" period.  When babies start being more aware of their surroundings.  Which means they get more difficult.  They don't eat as well, because they get distracted.  Which can mean more frequent nursing sessions since they're not filling up each time they get to the pump.  It also means naps and nighttime sleep can go right down the toilet, because all of a sudden they realize things go on when they close their eyes.  The phrase FOMO?  Probably invented to describe a 4 month old.

Goals for the Upcoming Month:
-  Work out the bottle issues with daycare
- Survive my first trial with an infant
- Introduce Thatbaby to meal times by having him join us at the table in his highchair

Things Thatbaby is doing:
-laughing
-purposely grabbing at things
-bringing toys to his mouth
-cuddling with toys
- L&O and my mom swear he crawled at Thatkid's birthday party, but I haven't seen it
- loves being the center of attention.  He "holds court" and lights up when there are other people around
- pulls his pacifier out of his mouth, and can put it back in if it's directly below his chin so he can just open his mouth and look down
- sleeping unswaddled 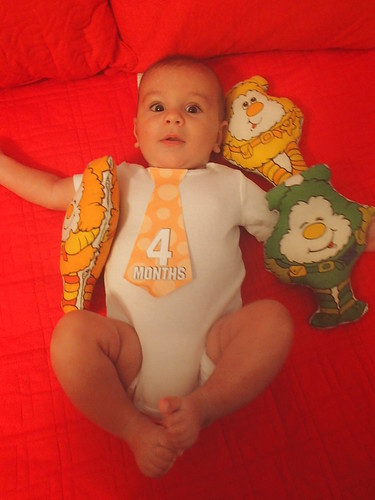