We're rolling hot and heavy into racing season people!  Which means that for the foreseeable future Sunday Rundays are going to be made up of race reports.  Starting with this one - a race report for the Disneyland 10k.

Oh the Disney Races.  They have their definite downsides - they are, pure and simple, a cash cow for Disney.  They are not races for those that love to run.  They are some of the most expensive races out there, and very little is included in the cost of the race - not even parking.  Now, that being said, I do love the Disney races.  They are well organized, it's fun to run through the empty parks, and the courses for the shorter races (5ks and 10ks) are some of the best out there.  The half marathons are fine, but you can't run 13 miles through the parks, so there's a lot of running through the streets of Anaheim.

On Friday Thatbaby and I headed up to Anaheim to hit up the expo before the race.  My kid is such a good sport - after sitting in the car (okay sleeping) he hung tight for 30 minutes for us to find parking, and then waded through the expo with me.  So of course I had to give him some kind of reward.  Like a trip to the Lego Store. 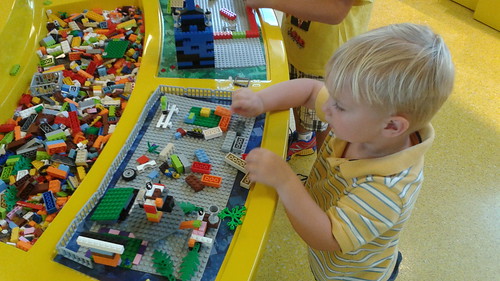 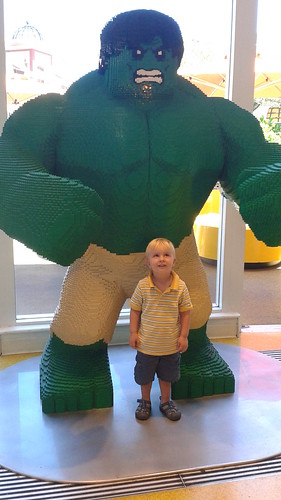 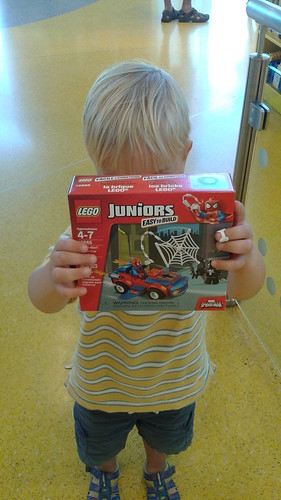 The original plan involved the entire family waking up and going to the race with me.  But when I realized the race started at 5:30am, I suggested that I go it alone.  I figured traffic and parking would be a nightmare, meaning I needed to leave the house at 3:30am, waking earlier than that.  It would be cruel to insist anyone else do the same.

But Thatmom insisted she wanted to come with me.  So we set our alarms for 3am and headed out shortly thereafter. 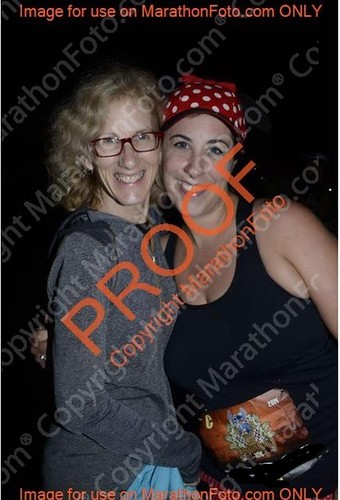 Thatmom ended up having a blast waiting with me for the race to start.  She loved all the costumes and decided that next year, she wanted to do it to as her first 10k!

I was appropriately outfited up - not in a very elaborate costume, but I think people could get what I was going for. 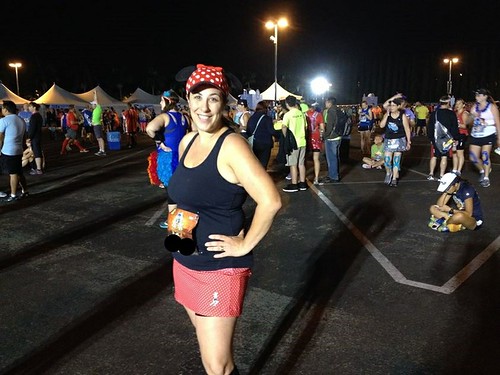 At 4:15, they hearded us into our corrals.  Since I was corral C, I had quite a bit of time on my hands, since they did a wave start, meaning we wouldn't actually start till somewhere around 5:40.  There was entertainment in the form of Elvis impersonators and "characters."  This year's theme was Lilo and Stich (okay, really Stitch.  There wasn't a sign of Lilo to be found)  So Hawaiian garb and Elvis abounded.  In fact, in the areas where there was piped in music, it was The King serenading us as we ran through the parks. 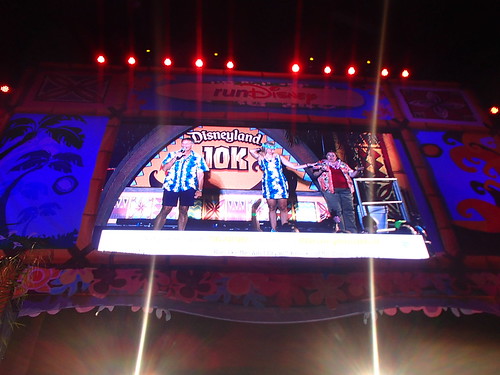 Eventually it was our turn!  Yay!  As soon as we got the sign, Corral C was off and running.  The girls beside me remarked "Why is everyone going so fast?"  (Told you it wasn't a runner's race!)  The first 2 miles were on the quiet, dark, streets of Anaheim.  I kind of liked getting that part out of the way first, and finishing in the parks.  The half marathons start in the parks, and finish outside, but it's nice to get the boringer part done first.  Shortly after Mile 2, we headed in to California Adventure.  The sun was just beginning to come up, giving that pretty dawn glow to everything. 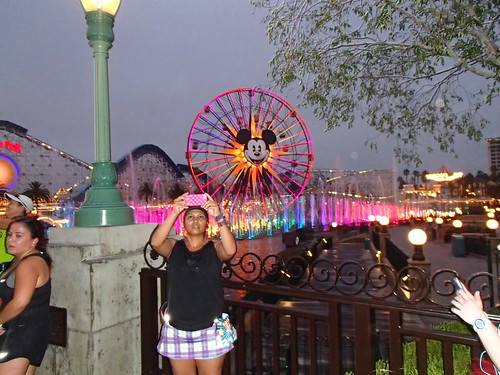 One of the best parts of the Disney races are the character interactions.  The characters are out for photo ops with Disney staff standing by to take your pictures for you.  I decided before the race that I would only stop for characters Thatbaby would know, in an attempt to impress him.  Unfortunately Thatbaby doesn't watch many movies, and tends to be more Dreamworks than Disney, which left my list at "Lightening McQueen, Ariel, Mickey, Minnie, and Mr. Incredible."  Even more unfortunately, there were very very few character opportunities at this race.  Less than any I had run before.  Which means I only took one picture with a celebrity.  Mr. Lightening McQueen. 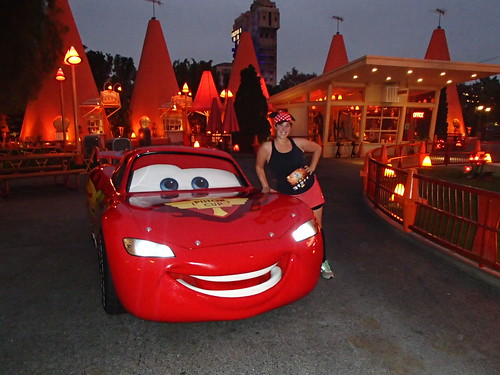 And yes, Thatbaby was very impressed.  Although he did ask why McQueen wasn't talking in my picture.  We wove through California Adventure for the next mile and a half, before heading into Disneyland itself.  Bringing us to my favorite part of any Disney race - running down Mainstreet toward Sleeping Beauty's castle. 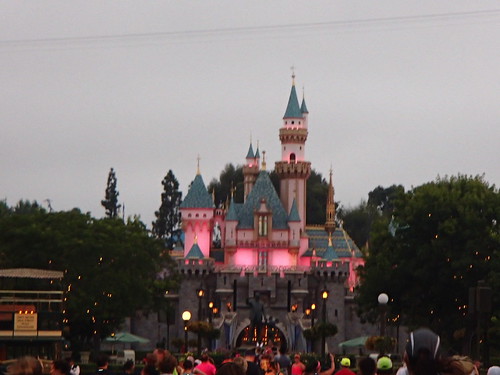 The course took us through Tomorrowland, Toontown and Fantasyland before sending us back towards Sleeping Beauty's castle, this time to run through. 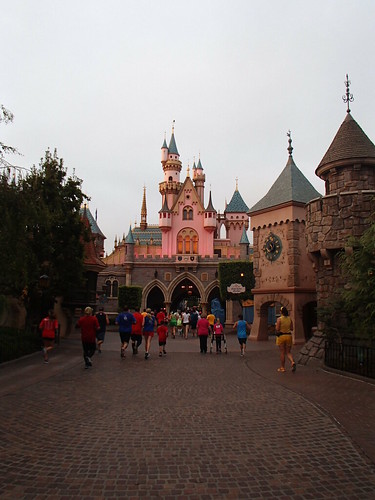 Then we went through Adventureland and Frontierland before heading back out to Downtown Disney. 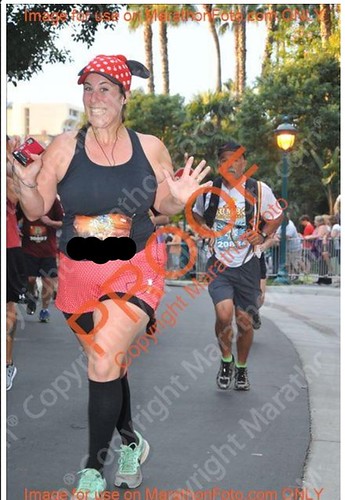 At that point, there was just half a mile to go until the Finish Line! 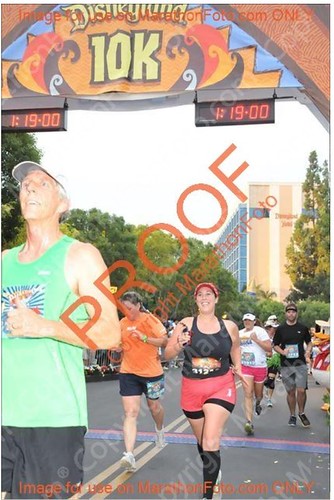 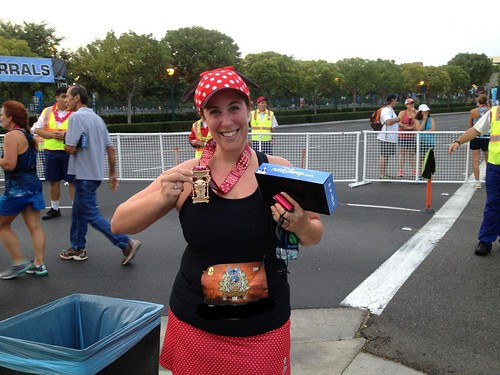