I'm not a genius 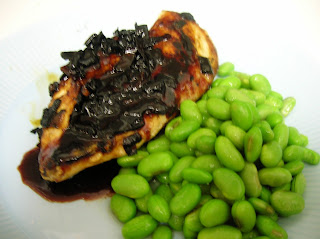 The melody for the song "Yesterday" came to Paul McCartney in a dream. He was positive he must have heard that song before and spent weeks humming it to people and asking what song it was and who it was by. Finally he came to the realization that it wasn't already a song, but a new composition of his. This is often a problem for musicians who aren't sure if the new tune they came up with is their own creation, or a melody bouncing around in their heads from somewhere else. Apparently this is also a problem for cooks.

I've been reccomending our new favorite pork dish a lot lately, and it made me think of using jam for another dish, a chicken dish. Unfortunately I was out of blackberry preserves, but we always have raspberry preserves on hand for Jon's lunches (PB&J). Raspberry chicken! However, worried it'd be too sweet, I thought I would cut the preserves with some vinegar, like a salad dressing - raspberry balsamic chicken! I really thought I was on to something here. A complete genius. Until I saw one of Cara's latest entries. Turns out I didn't create raspberry balsamic chicken, I was just channeling Cara.

At least I can claim that the chicken was a success. It was everything I had hoped it would be (or is that "read it would be"?) Sweet, but not too sweet. And with the nice dark red color, it'd be a nice easy Valentine's Day dinner for anyone still looking for ideas. 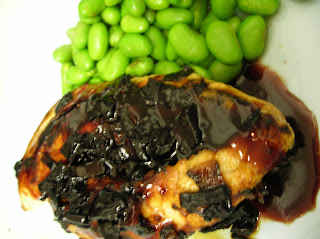