I'll borrow from my favorite bloggers and do a really quick update. Of course, I'll throw in some food info. Stay tuned all the way to the end and you'll get to hear why I've been so MIA lately.

Friday: I don't know why people always start weekend updates with Friday. By the time I get home from work I barely have time to put on pajamas, let alone do anything fun. This Friday was especially bad because there was an accident on the freeway that backed up traffic for about an hour. Which made my normal hour commute into a 2.5 hour commute. I came home, made a FABULOUS dinner - one of my best ever (recipe tomorrow) and went straight to bed.

Saturday: I slept in all the way till 10:15! And I only woke up then because my lovey husband brought be breakfast in bed. He totally redeems himself sometimes. We then headed out to the beach. Jon went to surf for a bit, and I headed for a run with Ringo. I took him on one of my favorite trail runs. He was very impressed. Then it was a quick shower before heading to the movies with my parents. We saw Charlie Wilson's War.

Excellent. Really good, but then again, when has Tom Hanks made a bad movie since Joe versus the Volcano....It was a perfect mix of humor and pathos and led to an interesting political conversation after.

Then it was time for shopping! We're heading to Yosemite and Mammoth in 2 weeks and with all this snow we needed new boots! How cute are mine?

After shopping, I headed over to my very first divorce party! It was to celebrate the finalization of R's divorce and the beginning of her new life which is already off to a pretty exciting start. Ahh to be young and single again. But the fun doesn't stop there! It was off to celebrate Bill's birthday. It's always a good time when Liz and Bill have a party. This time was no exception. Lots to drink and great company - the combination for a perfect party every time.

Sunday: Once everyone was up we headed to one of my favorite breakfast places. Original Pancake House. However, there was a long wait and we were all pretty hung over so we headed for the next best thing - El Torito Grill Brunch. The food was excellent, but when did they add the mariachis? Not impressed. Of course it wasn't too long before the superbowl was about to start. I brought a lot of food, and I wasn't the only one - there was so much to eat and it was all delicious.

At this point I would like to RAVE about a new cookbook. It's not really new. I got it as a wedding present and wasn't too impressed. Until I started flipping through it a couple weeks ago. The recipes looked REALLY good! And then I started trying them out. The recipes ARE really good! I used it as my base and everything was a HUGE hit. What's this fantastic book you ask? The Bride and Groom's First and Forever Cookbook. Insanely cheesy, but excellent recipes!!!! I made my own croutons and cesar dressing after finding recipes for them in the book. I had a second thought about bringing salad to a football party, but I'm glad I did. It was devoured almost instantly. 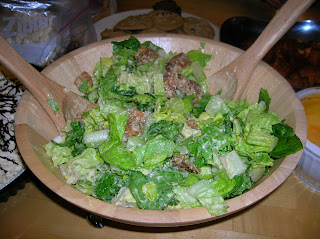 And what superbowl party would be complete without chili? This recipe was so good, Jon declared it his new favorite. I declared it would become our family recipe. It was really easy, and so flavorful. I tweaked the recipe by using 3 cans of diced tomatoes instead of 4 cans of crushed tomatoes, and a little less ground beef. 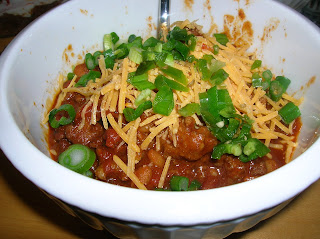 For snacking, there was herbed buttermilk popcorn. Jessica and Kim discovered this, and as a result, no one else got any. That's definitely a complement. 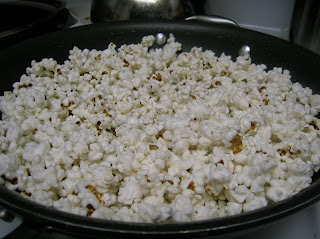 I also brought chips and dip. This was another recipe I modified by using less salsa - I didn't mix it with the red peppers, just putting the red peppers on themselves. I like using fresh veggies instead of salsa, and think its more visually appealing. 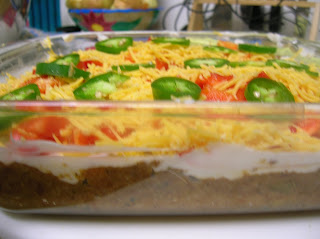 Ringo had such a good time, he passed out. First time ever. Pay close attention, because who knows if you'll ever see this site again. 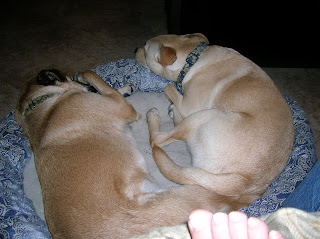 Monday: So the reason I've been so MIA lately is because I've been doing lots of interviewing. It's really a good thing - because I've gotten a lot of positive responses. So imagine my surprise last week when my current boss pulled me aside to offer me a position at my current firm! I love my job, I love the location, and I love the people I work with. I spent some time thinking about it and calling back the places I was still waiting to hear back from, before accepting it this morning. I now have a job. An honest to goodness, big girl, lawyer job. In the area of law I always wanted to practice in. In the town/city/county I wanted to live/work in. It's a big deal and I feel oh so lucky!!!!
Posted by That Girl at 8:07 PM