Well we're back, safe and sound. There were some serious weather situations on our drive home, but I'm happy to report we are all home and exhausted! Ringo's been sleeping ever since we picked him up from camp!

I've spent the past hours just uploading our gazillion photos from the trip - Snow lends itself to some pretty spectacular views. I really miss the snow, and trips to snowy areas are the best because you get all the benefits and none of the negatives (like shoveling snow).

I'll start posting trip highlights and lowlights tomorrow (and boy do I have some great stories). But tonight I'll catch you up on our low key Valentine's Dinner.

As I mentioned before, this was a low key dinner because we were leaving early the next morning and we were eating at home. We had already celebrated the week before, so the "deal" was that we were just supposed to exchange cards on Valentine's Day. Of course that never works out. We're both just to into getting things for each other. I got Jon some of his favorite lip balm in a bag filled with Hershey kisses. He surprised me with a beautiful flower arrangement from the local florist (you gotta love going local) and a box of Godiva cherry cordials (which are my favorite chocolates). Look how much they brightened up the table! 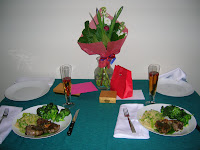 We went for a "green" themed Valentine's this year for two reasons. First because the next morning we were headed for the snow. Second, because on our first Valentine's Day together we did a "red" themed dinner and although Jon enjoyed the chicken with brandied cherries, he couldn't help but feel the chicken was bleeding all over the plate. Which is far from romantic. Add to that the fact that the red wine ensured his date passed out shortly after dinner (or possibly during), we weren't too keen on a repeat performance. So green it was.

As I mentioned before, lamb is a special occasion dish for us, so I made lamb for dinner. Given that Jon doesn't like mint jelly with his lamb, I thought the recipe for lamb with mint mustard sauce from the B&G cookbook would be an excellent compromise. It was. Jon LOVED the mint mustard sauce and couldn't believe it even had mint jelly in it! I served the lamb with couscous with leeks (couscous being my favorite starch) and some roasted broccoli and our green meal was set. The sides were light enough not to compete with the richness of the lamb yet definitely could stand on their own. Jon was very impressed, and it was an easy enough dinner to throw together after a day at work. 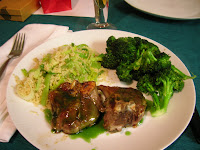 As for Ringo, I gave him a Valentine's Day treat of a raspberry. Ringo has this adorable habit of rolling in things he thinks smell good. It's quite a laugh when I spill a spice in the kitchen...or drop a shrimp shell....or put detangler in my hair.... Well Ringo thought the raspberry smelled incredible. So incredible, that rather than eat it, Ringo decided to gingerly place the raspberry on the ground and roll on it. All over his face. Once we explained to him that raspberries are for eating and not rolling he got very embarrassed. But I still managed to snap a picture before cleaning him off. 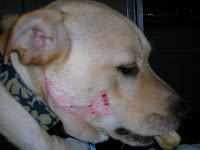 I got one more belated Valentine's Day gift, but I will leave you in suspense so that I can explain the gift in the context in which is was received.

More tomorrow!
Posted by That Girl at 7:26 PM