Yosemite Day 1
We packed up the car, and boy was it packed! First thing was to drop Ringo off at "camp" and then we were on our way. I have always loved car trips with Jon. We have the best time, making random stops, listening to music, and just enjoying each other's company. The drive up to Yosemite was beautiful and uneventful.

We got to Yosemite and checked into our room at the Yosemite Lodge. Do you see all that snow? 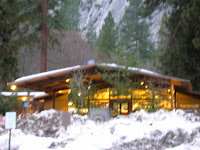 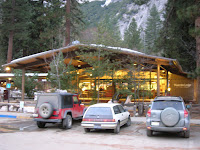 After checking in, we went to find the ILs.....but they weren't there. We checked with the front desk, and they had checked in, but they hadn't bothered to wait for us or leave a message as to where they were. Nice. So glad we drove over 6 hours to see them. So Jon and I took the opportunity to play in the snow. 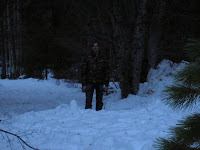 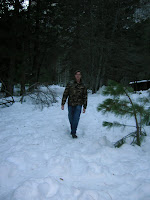 We also admired the scenery - niiiiiiiice! I really do love the snow. 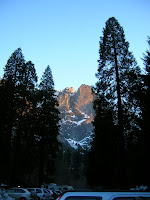 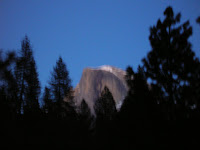 And check out the view from our room! That's Yosemite Falls, the tallest waterfall in the US. 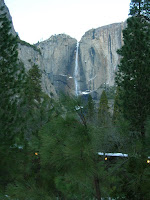 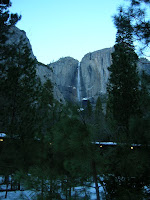 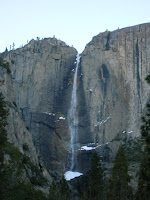 We finally caught up with the inlaws just in time to head to dinner. I apologize for not taking pictures of dinner, but the inlaws don't know about this blog and I'd like to keep it this way. We had dinner at the Mountain Room of the Yosemite Lodge and it was wonderful. Jon had the Sierra Nevada Beef Stew and I had the Duck Confit and pasta (shredded duck, goat cheese, spinach, and pasta). Both meals were excellent, but rich! Neither of us could finish.

One of the things I hate about eating out with the inlaws is when the bill comes. We always split it 3 ways (parents, brother in law's family, us). The problem with this is, the parents usually order the most expensive thing on the menu, soups or salads, and multiple alcoholic drinks. Brother in laws family is made up of four people and they are also big drinkers. This means that although our "portion" of the bill is usually around $40, we end up paying over $100 because we're just splitting it in thirds. Bleh. Nothing like paying for someone else's dinner.

After dinner we headed back to the rooms. No one had made any plans for the next day. That's convenient. Mother-in-law wanted to go Cross country skiing. Father-in-law vetoed that idea. Jon and I suggested snowshoeing and that was better received. We decided to meet for breakfast at 9AM. Father-in-law announced this meant we should all set our alarms for 7:30. Thanks Father-in-law, but I don't really need you to dictate my rising time. Especially since it doesn't take me an hour and a half to get dressed.

We got up at 8 AM and went to take a shower. No hot water. It was about the temperature of a pool. Jon assured me it would warm up and ushered me into the shower. I started crying. Mostly because it didn't get warmer - it got colder. It was turning to ice as I stood in it. How is that even possible? Poor Jon felt so bad he stood holding a towel over the heating lamp so it would be warm for me. I exited the shower teeth chattering and shivering. Jon didn't even attempt to shower. Needless to say we were ready to go well before 9 AM.

9AM comes and goes, and there's no sign of father-in-law. We're playing in the snow with niece and nephew and just waiting. Finally Father-in-law shows up and watches us play for a moment before gruffly asking "Are we going to breakfast or what?" Look guy, we're here waiting FOR YOU! How on earth does it take you over an hour and a half to get ready?

Walking to breakfast we learned we were the only ones without hot water. Everyone else enjoyed lovely showers. Bah.

After breakfast we discovered the bus to Badger Pass didn't leave for another 45 minutes, so we all headed out for a walk, except father-in-law who went back to the room to finish getting ready(?????) and wait. Glad we came to Yosemite because they wanted to be outside. 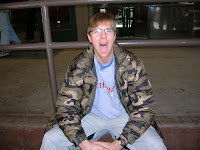 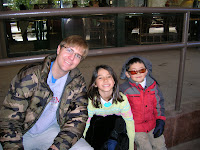 The snowshoeing was great fun! Well, for everyone except father-in-law. The kids especially loved it because we kept stopping for snowball fights. And Jon taught them how to make snow angels. I loved being in the middle of the wilderness. There were quite a few people on the trail, but there were times when we had the place to ourselves. 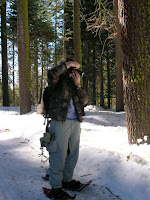 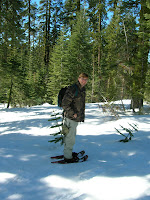 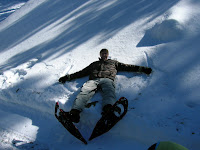 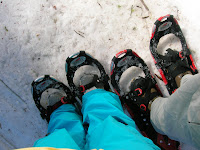 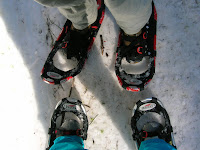 After lunch we had an hour to kill before the bus came to take us back to the lodge. FIL decided to sit and wait in the Badger Pass lodge while the rest of us split up. Jon and I found a great hill and created our own sled trail by sliding down on our butts. We started a trend. Can you see our path? 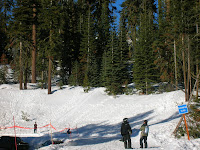 The niece and nephew went tubing. Jon, ever the great uncle, joined in. 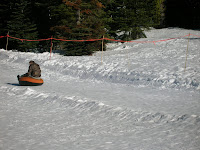 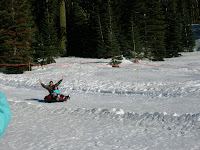 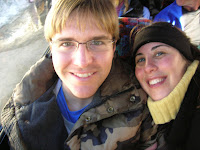 Dinner was at the Ahwannee - one of the finest hotels in the country. I wish we'd stayed there. It was absolutely beautiful! 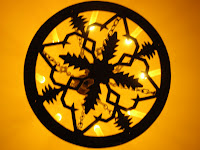 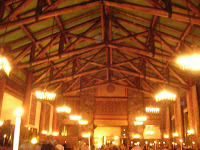 All the candlelight was definitely complimentary for some of us: 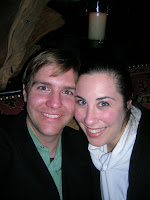 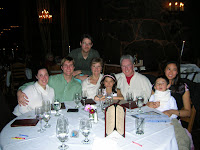 Although it didn't help if you didn't help yourself.....Apparently nephew is at the age where he likes to dress himself, but probably shouldn't. When I saw where he had gone wrong I made him pose for me. Can you spot his mistake? 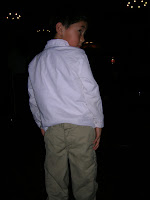 Dinner was excellent. Jon and I shared the pork oso bucco and white truffle pasta - like a grownup macaroni and cheese. That was followed by a flourless chocolate torte. Yum! The only bad part of dinner was having to be with the inlaws. Everytime we go out with them they order whiskey sours - with Jack Daniels. Now I won't even start on the fact that its a waste of good liquor in a mixed drink. I will say that every time they order this particular drink they send it back because they can't taste the whiskey. Really? The MIXED DRINK isn't strong enough? Really? Perhaps that's because its one of the weakest drinks on the market, favored by sorority girls and old biddies. Everytime they get irate at the server for daring to bring them a weak drink and cause a big scene. We begged father-in-law not to call over the manager to complain and he got very upset with us for not allowing him to have his say. How embarrassing. I hope the wait staff put some "additives" in his food.

Jon and his brother had arranged to split the cost of dinner since it was to commemorate their parents anniversary. Well, I should say that Jon had arranged to split the dinner with his brother who had to be guilted into it. What a sweetheart. The inlaws were notably surprised, which makes sense, since they don't think of things like that. Although, after thinking about it for a minute, mother-in-law announced this made sense since she was paying for part of our room the first night. I almost punched her. I was going to ask if she would chip in for the rest of the room, the expensive dinners, the gas, and the cost of boarding the dog that we had to do to join them at their mandatory party, but I knew it would upset Jon, so I held my tongue.

I didn't want a repeat of the shower situation the next morning, so when we got back to the room I jumped into a hot shower - yay for hot showers!!!!! before heading to bed.
Posted by That Girl at 5:55 PM