Our first day in Mammoth we got up early so we could hit the slopes as soon as they opened. Last year was my first year skiing EVER. I really loved it and told Jon we had to make it an annual event. I'll do a really quick recap of last year since it's important.

Day 1: I get lessons in the morning. Hey - I can do this. I am amazing. I have the wedge down. The group meets up for lunch and Jon decides to spend the afternoon with me. He brings me up my first chair lift. I'm not happy. I hate heights. I hate the chair lift more. I'm beginning to hate Jon. We get off and I realize I have to get down the mountain. Crap. People are whizzing by me. I'm crying. Hysterical. I hate Jon. I hate him so badly. Why did he bring me up here? I demand he call the rescue patrol. He doesn't. Somehow I make it down to the bottom of the mountain. I think it takes about four to five hours. Maybe a little less. Jon signs me up for more lessons the next day.

Day 2: Lessons in the morning. No one else shows up to the group lesson, so I get a private one and the instructor works with me all morning on going up the chair lift and down the scary run (it's a green - the easiest one). In the afternoon I'm able to go down it with Jon once.

Fastforward to this trip. As we ride the bus over to the slopes, I start getting nervous, nauseous, and sick. I can't do this. Why did I want to come here again? I hate skiing. I'm going to kill myself. Jon signed my up for a lesson again, just as a refresher. He's a good man. The lesson was really helpful because it helped me remember that I know how to ski and I really like it. I was worried at first because the instructor was an ass. A serious ass. First run down the bunny slopes and he was already yelling at me for going to slow. "You might as well walk down the mountain." Well you know what buddy? You don't scare me. I like going slow. So there. Luckily, he didn't stay our instructor for long and nice guy instructor took over. Nice guy instructor who thinks we should be going slow, so we can pick up the skills. And know what? I got skills! I'm not the slow person in the class! In fact, the instructor barely pays attention to us as he works with the slow person, and I'm okay with that! I'm swooshing down runs I was afraid of last year! Nice instructor sends us up a run with creep instructor who balks at the sight of me CI: "I don't want to take her - she's slow"
NI: "No, she's go great control!"
CI: "That's the problem, she has too much control. You could read a book on her way down. Hey - did you bring a book with you?"
I stick out my tounge at him and tell him I brought a novel I'd like to finish on my way down and we head up the lift.

The next two days are filled with skiing and friends. C and R came up just in time for perfect conditions. It snowed! That made for nice powdery runs. R kept Jon company on the hard runs, and C and I made our way through the greens. By the last day, I was going down blue runs!! Jon snapped some pictures of me. C calls my style "Zen skiing." 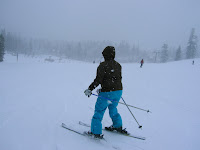 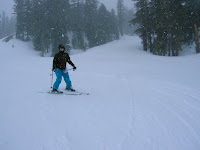 In turn, I captured some pictures of Jon. He's a snowboarder - obviously. 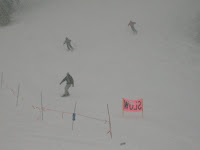 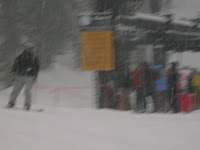 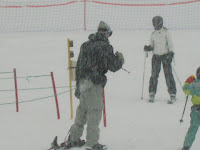 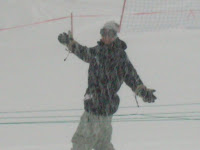 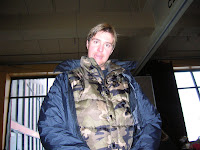 The last night we ate dinner at The Mogul restaurant, and it was such a ski lodge kind of place. French onion soup, great steaks, good beer. We were warm that night despite the frozen temperatures.

We were sad to leave, not just because we had such a good time, but because the weather was turning.....it was snowy, and icy and there were storms coming in. We gingerly made it to the freeway where it was scary for a bit, and then just cleared up....like magic. Check these pictures out which were taken over a span of about 10 miles. 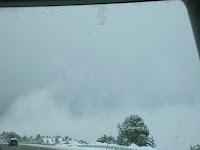 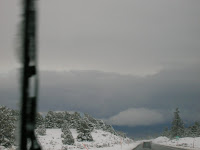 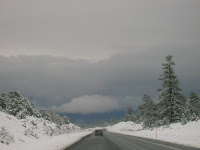 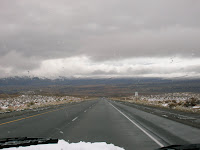 We stopped in Bishop at Schat's Bakkery for a yummy sandwich on fresh bread. We brought home some of their sheepherders bread (which makes excellent toast) and chili cheese bread. Then it was drive drive drive all the way home. Which is always fun for us. We picked up Ringo and crawled onto the couch to just relax the weekend away.
Posted by That Girl at 7:51 PM