Our third day we woke up and surprise, surprise, there was hot water. Jon took a nice long hot shower. We were ready to go by 8:30. At 9, surprise, surprise father-in-law was still not ready. After breakfast, Jon had wanted to take me to Yosemite Falls. The rest of the family wanted to come. We had to hit the road early, so Jon suggested driving, which was quickly vetoed by everyone else who had all day to spend and a 2 hour drive home.

We hiked up to lower Yosemite Falls. They were so beautiful! 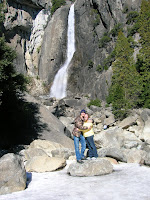 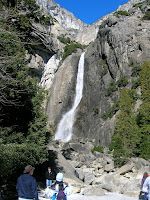 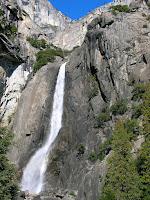 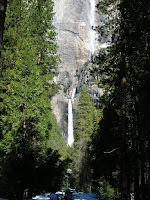 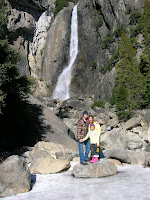 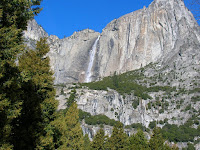 After we walked over to Yosemite Village so Jon could go to the Ansel Adams gallery. Unfortunately, by the time we got there it was time to hit the road so we had to turn around and run back to the lodge.


Then we were off for South Lake Tahoe. As I said before, I've been wanting to go for a long time. It did not start out well. Due to weather, we weren't sure if we were going to be able to stop in South Lake Tahoe or if we'd have to push all the way through to Mammoth. So we hadn't reserved a hotel room in advance. We pulled into a place by the lake called "Fantasy Inn." Basically it was a bunch of sexually themed rooms with vibrating mattresses, mirrors on the ceiling.....we decided to pass.

Next we came to the Hacienda Inn. See the sign? Spa Units? Fireplaces? Sounds nice right? 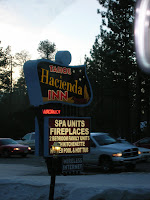 I didn't take a picture of the inside of the room, because, well, frankly, I don't think they allow pictures of jail cells. There was a single shower head protruding from the wall and the curtains were ripped off. No spa. No fireplaces. When we complained we were shown another room that was only a smidge better. It had curtains, only they had scratches all through them. Still no spa. Still no fireplace. We didn't stay very long. Jon got our money back and we booked it out of there before the wardens noticed we were gone.

Instead we found this lovely hotel, right down the street. Jon talked to the guy at the front desk who quickly became our best friend. He gave us a huge discount on the room, and it was a spa room! So much nicer. 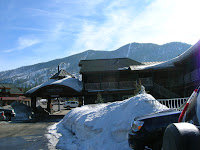 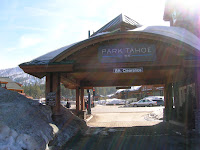 We took his recommendation for dinner and went to a Chinese restaurant called "Sesame" where we had some of the best Sesame Chicken ever!

The nest morning we woke up and walked down to the lake. It was seriously one of the most gorgeous places I have ever seen. We had to bundle up (I wore 2 pairs of pants, 2 shirts, a sweater, and a jacket), but it was still worth it. 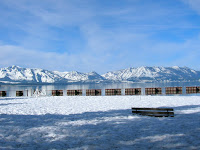 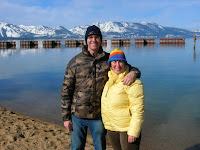 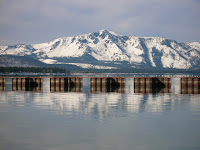 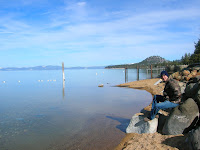 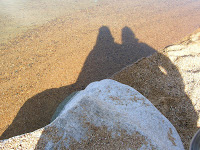 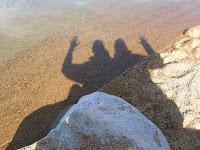 After we sat and stared out at the water we headed on our way to Mammoth. We had to stop and take some pictures, because it was just too pretty not to. 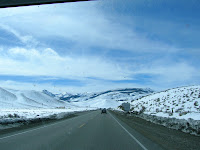 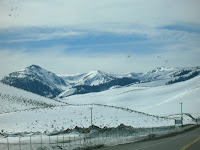 This is Mono Lake. 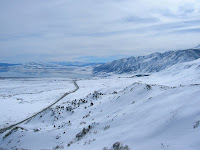 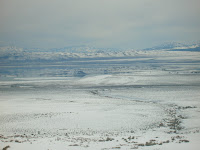 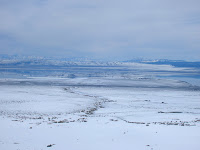 We got into Mammoth too early to check into our condo, so we went and grabbed lunch at Giovanni's pizzaria. Sometimes there is nothing like Pizza and Beer. And there is NOTHING like Mammoth Brew Co. beer. So good!!! Then we headed to the store, but were sidetracked by something shiny...... 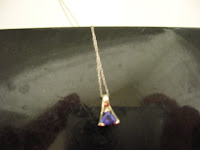 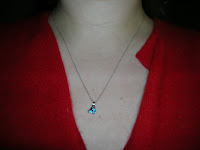 Jon decided my neck looked warm and he needed to cool it off. He stopped into a jewelery store and got me the most beautiful Alexandrite pendant. Happy Valentine's Day to me! Alexandrite is a stone discovered in the Ural mountains and it thought to have supernatural qualities because it changes colors all the time. It's green in natural light, but come inside and it turns red-purple. As you can see in the photos, it can also take on various shades of blue. It's beautiful!

After our short detour, we stocked up on supplies and headed to the condo where we made dinner and started wishing for snow.

Was our wish granted? Find out tomorrow!
Posted by That Girl at 11:18 AM