Eat to the Beat! 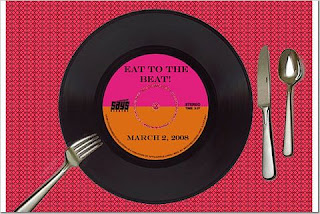 When I saw this new blog event on Elly's blog I got really excited. I love music. I love music and cooking! In fact, when I'm home alone I put on music and dance while I cook. It really heightens the experience and helps me relax.

I use my time in the kitchen as stress relief, a way to relax. I use music for the same thing. When I'm feeling especially down and frustrated, music makes me feel better. And I like all kinds, as long as it has lyrics. Well, that's not entirely true. I do love some classical music, it's just that I'm not into trance/dance/techno. Maybe I love all music that has a melody? harmonies? Who knows but I listen to quite the variety.

Elly's challenge is to make a food that relates to a song, band, album, etc. I knew exactly where to start on this. Those of you who know me well (uh oh - is this a test?) know that I adore the Beatles. It's been that way for years ever since I stole a Beatles' tape from my dad in Elementary school (I still have that tape). Back then it was all about "I saw her standing there" and "Kansas City" - we're talking OLD school. I got my first cd of my very own for Valentine's Day in Jr. High from parents - Sgt. Pepper, kind of an interesting choice for a 13 year old girl, but I loved it. Ironically, this is the first cd that Jon stole from me when we started dating. In college I took the History of the Beatles and grew to appreciate the men behind the music as much as I had the music and that was the final nail in the coffin. CDs were bought, listened to, analyzed - I'm sure in much the same way that teens of the 60s sat on their beds doing. Our wedding was a tribute to the Beatles from the bridal march, to the recessional, to of course the "Shout" during the reception.

You know that what you eat you are,
But what is sweet now, turns so sour--
We all know Obla-Di-Bla-Da
But can you show me, where you are?..
So when it came time to pick an eat-to-the-beat recipe, I knew where I had to turn. I had a lot of ideas at first, including some Lucy in the Sky with Diamonds stained glass cookies, but eventually decided I could get no better than the Savoy Truffle. I mean the song itself just makes you hungry, naming off dessert after dessert after mouthwatering dessert. And the piece de resistance is that chocolatey goodness known as the Savoy Truffle.

Creme tangerine and Montélimar
A ginger sling with a pineapple heart
A coffee dessert--yes you know it's good news
But you'll have to have them all pulled out
After the Savoy truffle.
Internet research led me to the information that the song was about a box of chocolates and was a jab in the ribs to fellow musician and best friend Eric Clapton who had quite a bit of the sweet tooth. However, no one was able to uncover what exactly the Savoy Truffle consisted of. I was undetterred. This meant that I got to create my own Savoy Truffle. I told my eater-of-all-things-chocolate that I was going to make truffles and asked what he'd like in them. Having recently watched an "Unwrapped" episode about orange flavored treats, he told me he wanted chocolate and orange. My jaw dropped to the floor. My husband hates chocolate and orange. But what he asks for.......

So I adapted the classic cake truffles to chocolate truffles with a marmalade center (I had to get my Lucy in the Sky in there somewhere.....) 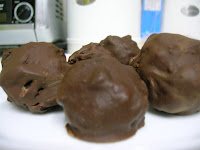 1) Bake the cake in a 9×13 pan as directed by the recipe/package selected.

2) Crumble the cake while still slightly warm into a bowl and combine with frosting. Use a spoon and form the mixture into balls and refrigerate.

3) Add marmalade to small saucepan and heat over medium until it liquefies. Using a toothpick, make a hole to center of each truffle (make this hole wide enough to put the marmalade in, and make sure not to go all the way through). Use a teaspoon to drip the liquid marmalade into the hole. (I tried to do this using a "flavor injector" - like syringe, but the orange peels clogged the tip. If you can think of a better way to do this, go for it)

4) Melt the chocolate over a double-boiler and use two forks to roll the truffles into the melted chocolate. Place the truffles on a cookie rack to rest so that they don’t “grow feet.” Once they have completely cooled, transfer to the refrigerator to allow chocolate to harden. 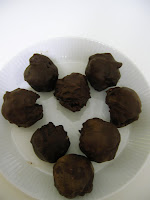