As soon as I learned I was going to be in Austria for a month I started teaching myself German. After 6 months I had learned enough to survive, impress quite a few Austrians, and even charm my way out of an inspection by Dusseldorf Customs agents.

But one thing they really don't teach you in any "teach yourself" program you can learn by drinking. The best way to learn German? Order a beer. It's easy enough. The German word for beer sounds exactly the same, its just spelled differently - bier. Here's a quick little vocabulary lesson for ordering Bier:

Weiss - (pronounced Vice) Means wheat. Weissbier is wheat beer and its almost like drinking a meal. It is very thick. So thick in fact, that here in the US, our tastebuds much prefer:

Hef Weiss - (pronounced Hef-vice). Means half wheat. This is a slightly milder, much less thick weissbeir.

Helles - (pronounced hell) Means light. This is a light, lager like beer. Golden in color.

Radler - (pronounced Raadler) This is Europe's answer to Mike's Hard Lemonade. It's a combination of light beer and lemonade.

Of these, my favorite is Dunkles. I love dark beers and German dark beers are the best. They're also great for making a steak sauce. Tonight we had steak with a Dunklesbier sauce and mashed sweet potatoes and persimmons. Jon loved the sauce. He even ranked it higher than his current favorite - A1 (seriously who raised this boy?). As for the mashed potatoes, he was very impressed, personally I didn't like that the persimmons didn't mash. They remained as chunks in the potatoes. I'll put down the recipe, but I think the next time I make this I'll puree the persimmons before adding them to the sweet potato. 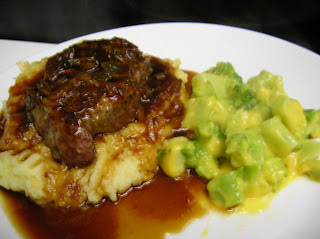 1) Combine all ingredients in saucepan and simmer over medium-low heat for 30 minutes. 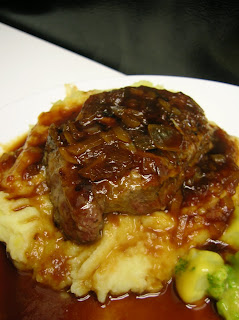