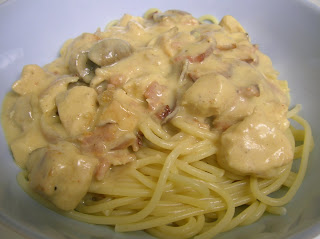 My dad was almost the complete stereotypical child of the 60s. This include most meals we consider to be "classic American" meals. Meals like casseroles, shepherds pies, pot pies, tuna melts, etc. etc. etc.

What's funny is, growing up we never had any of these kind of meals. The closest we got was meatloaf, and even that wasn't so often. I didn't have my first potroast until last year. I think that's mostly because these meals aren't exactly healthy.

Although Stroganoff is a Russian dish, I always think of it as a 60s housewife's staple. Truth is, I've never been anxious to try it. The idea of beef and sour cream just doesn't appeal to me. Then I stumbled upon a Chicken Stroganoff recipe in Cooking Light. I know it sounds weird, but for some reason Chicken and sour cream doesn't offend me nearly as much. And the fact that its Cooking Light made me feel like its probably healthier than anything my dad would have had growing up. Of course, now that I've made it, I have a hard time thinking its healthy at all. I cut back on the sour cream, and next time I make it I'll probably use turkey bacon instead. I'm sorry, did you hear me say next time? Yup. This is sure to be a repeater. 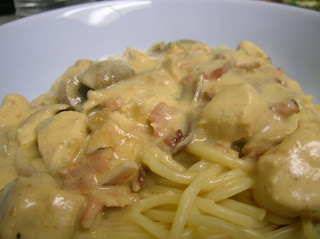 1) Cook bacon in a large skillet over medium heat until crisp. Remove bacon from pan, drain on paper towels and crumble.
2) Add onion and chicken to drippings in pan; sauté 6 minutes, until the outside of all the chicken pieces has started to brown.
3) Add the flour and stir frequently to combine with all the fat in the pan. Cook 1-2 minutes to cook off the raw flour taste.
4) Add broth, mushrooms, bacon, salt, pepper, paprika, and garlic; bring to a boil.
5) Cover, reduce heat, and simmer 10 minutes.
6) Add sour cream to pan, and stir to combine with the rest of the sauce. Turn off the burner and let the sauce stand on the warm burner to thicken. Serve over noodles.
Posted by That Girl at 8:46 PM