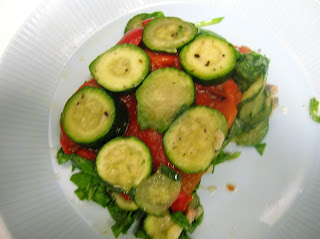 If you recognize the title of the post, then you already know the main ingredient of tonight's recipe. If you don't, Shame on you! You are clearly missing out on one of the world's greatest works of fiction.

Tonight's dinner was a stacked lobster salad. It was cold, it was easy, and though I was nervous about how it would turn out, it was very well received. Due to cost, Jon thinks this would work just as well with crab - which is expensive, but not nearly as expensive as lobster. Plus the lobster was a little salty. 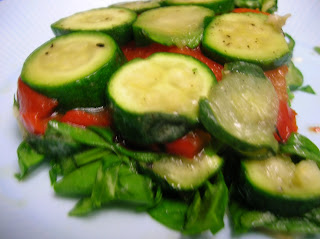 1) Preheat broiler. Line baking sheet with foil and lightly brush with 1 Tbsp olive oil. Place zucchini slices on prepared sheets. Brush with 1 Tbsp olive oil and season with salt and pepper. Broil 3 minutes on each side, or until cooled through and lightly browned.
2) Puree goat cheese and remaining olive oil in food processor until smooth. Season with salt and pepper.
3) Line glass loaf pan with plastic wrap, leaving 4" overhand. Place single layer of zucchini on bottom of pan. Top with roasted red pepper. Spread half of goat cheese over peppers. Sprinkle with 1/2 cup chopped spinach and half of lobster.
4) Repeat layer of zucchini. Layer remaining cheese, spinach, and lobster.
5) Cover lobster with last layer of zucchini. Fold plastic over to cover. Press down gently. Refrigerate overnight until firm.