New Traditions:
5:00 AM my alarm went off. Jon groaned, but I hopped out of bed and pulled on some clothes so I could begin making smoothies. Around 5:20 AM the first one arrived. By 6:00, we were all here. A group of 8 girls with one goal in mind. Okay so actually there were two goals, but both involved the 10K known as the Turkey Trot. Some of us were anxious to get a good time, and others were just looking for the accomplishment of completing the 6.2 miles! 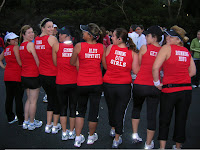 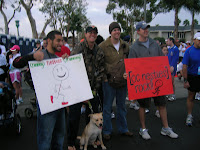 We got to the race about 40 minutes before it started. It was cold. We gave each other encouraging hugs to keep warm. At 7 AM the gun went off an so did we. This is where the group dispersed as everyone began searching for their pace. I stayed back with A, partly because I had promised her I would, and partly because I was really nervous about finding a pace I could stick with for all 6 miles. A provided the perfect pace for me and I didn't even think about distance until she gave me a cheery "2.2 miles left."

Throughout the course we saw the other girls and we cheered each other on. A group of the husbands made camp on the course and cheered us as we passed. Katie and Kam even showed up with a sign! 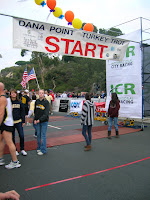 A and I crossed the finish line together. 6.2 miles! We met up with those who had finished before us, and waited at the line till everyone had crossed. Then, as usual, there was lots of picture taking and lots of congratulations for everyone. We've already made plans to do it again next year. 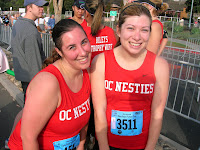 Old Traditions:
When I got home from the race I had one more task to accomplish for Thanksgiving dinner. I had to make the pumpkin pie. Mmmm Pumpkin pie! Definitely one of my all time favorite parts of Thanksgiving. And quite possibly one of the easiest dishes to make. Of course, it would be easier if you have a fridge that doesn't freeze your pie dough........Once the dough defrosted enough to roll out, it was a matter of moments until it was in the oven and then there was just waiting as the scent of cinnamon and nutmeg filled our apartment. Jon felt I overfilled the pie, but my cousin was in heaven. He only likes the filling - leaving the pie crust. He loved how much filling there was! 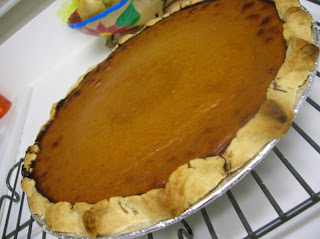 After the pie was cool enough to move we headed to my parents for a second Thanksgiving tradition - the movie. Along with my brother and father we headed to the theater, leaving my mom alone to work her magic. Lack of sleep and emotional fatigue had me crying all through Fred Clause.

After the movie I promptly fell asleep on the couch until all the family and friends arrived. We ate, we drank, we laughed, we shared stories. We toasted my bar passage and sang happy birthday to Jon. My father had finally won his battle to have Turducken, although my wise mother made a regular in addition. I'm glad she did - the Turducken was a little fatty for my taste! After everyone was full to capacity, we were sent home with some ice cream cake. It was a very successful day! 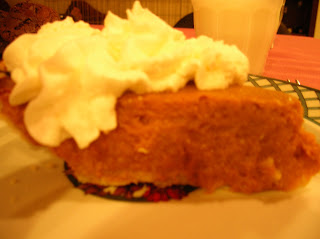 1. Heat oven to 375°F. In a large bowl, mix brown sugar, flour, spices and salt.
2. Stir in egg. Beat in pumpkin and Evaporated Milk until smooth.
3. Pour mixture into prepared pie crust. Bake 50 to 55 minutes. Serve warm or cold.
Posted by That Girl at 9:58 PM