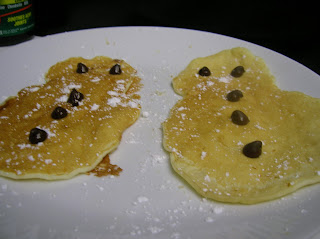 Friday was Jon's birthday. I told him he could decide whatever he wanted to do for the day and we'd do it. He decided he wanted to get up at the crack of dawn and go surfing. I decided to stay in bed while he did that.

When he got home it was time for presents and breakfast. As I've mentioned before Jon's favorite breakfast is pancakes. I decided to try really hard to make the pancakes the way he'd like them since it IS his birthday. I decided to throw out the recipe he claims his dad used and experiment to create my own version. I also decided to have his breakfast and present be "themed."

See, in March Jon and I went to Mammoth for the first time. Jon has been snowboarding since high school - although not consistently. In fact, he hadn't worn his snowboarding boots since college. When he wore them in March, they were too small for his feet and he ended up with 2 black toenails by the end of the trip. We both had such a great time we knew we would go back, and Jon knew he'd need new boots. He wanted to run out and buy them right away, but his ever rational, economical wife told him it wasn't a good time to buy them.

Flash forward till now. I decided to get Jon boots for his birthday. I spent weeks looking for the perfect pair and then weeks worrying that I might not have got the right boots! Thankfully Jon loved the boots. And even more thankfully - he LOVED the pancakes. He claims they're the best pancakes I've made. I'm sure the snowman shape didn't hurt either ;-) 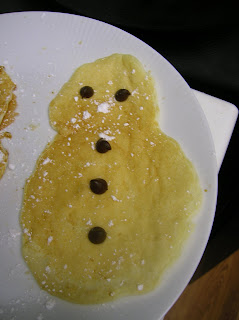 1) Heat griddle and spray with cooking spray.
2) In a medium bowl, combine Bisquick, buttermilk, egg, and banana. Stir until mixed throughly.
3) Add milk until batter reaches desired consistency.
4) Drop large circle of batter on griddle. Wait 2 seconds and then drop slightly smaller circle directly above larger circle so that they touch. When bubbles appear on the surface of the pancake, flip over for another 30 seconds. Repeat with additional batter.
5) Give the snowman eyes and buttons with the chocolate chips. Dust with powdered sugar.
Posted by That Girl at 5:24 AM