What a LONG weekend!

It's actually been a really long week - which explains the absence of posts. Between visiting with out of town friends, moot court judging, an evening with my brother, parties, GTGs, and shopping I almost forgot what my home (and kitchen) looked like. Here's a brief update.

Tuesday: Dinner with my friends Jenna and Des. Des is constantly traveling for work and Jenna lives in LA, so its very rare when the three of us are all in the same place at the same time. Jenna was in town for work, and Des wasn't out of town for work, so we marked the occasion with dinner. It was good to catch up with them, even though Des wasn't much of a talker since she was getting over a sore throat.

Wednesday: Moot Court competition. During law school I was part of the moot court national team. One of the hardest parts of Moot Court was finding judges for the tournaments we hosted. Now that I'm alum, the current board turns to us to act as judges. And we comply. Not because of any loyalty, and not to make their lives easier. Mostly we comply so that we can catch up with the other alumni and "cause as much disruption as possible." I got to catch up with my friends Mark, Ryan, and Haley. Haley and I had requested to judge together (and yellow M&Ms, and a limo, and artisan spring water......) It was fun judging with Haley - we were partners in the national tournaments so we both have most of the same critiques and complements. After I caught up with my brother who was in town for work and spent the night catching up with him. He works the WORST hours and I feel so bad for him. No wonder he's so tired! I just wish he would take off a day on the weekend to relax! 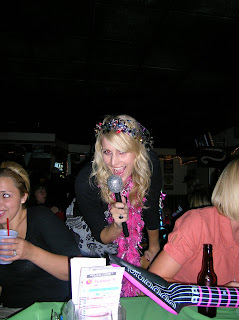 Friday: Jessica's birthday party! And any party with Jessica involves karaoke. This was no exception. Jon stole the show, as he always does. And he repeated his performance with Jessica that had the critics raving last time. 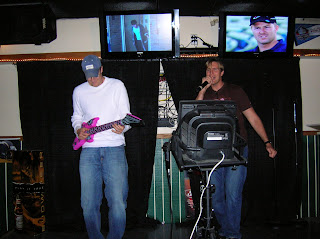 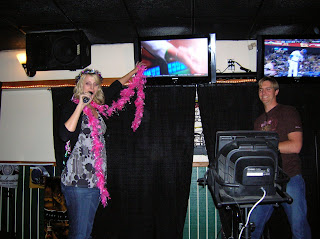 Saturday: Shopping with my mom. Let's see, my mom and my brother all in one week? I really am a family kinda girl. We hit up the outlets and were very successful. Go girls! 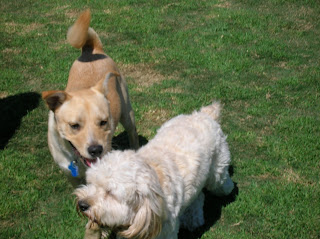 Sunday: We had an OC Nesties GTG at dog park. Ringo was in heaven. So many dogs, so little time. And he liked everyone he met. Surprise Surprise. Its fun to get the dogs involved and there were a lot of new faces which is always nice. After I had coffee with my friend Lucy who I haven't seen since May. This has been a real busy week, but on the plus side I have gotten to catch up with so many of my friends. It makes the business worth it. And even though it was so busy, I still got to relax tonight with the hubs, have a nice dinner and watch Blades of Steel. The movie was funny, and the dinner was excellent. Steak dinners are always nice, and this was topped with a spicy blue cheese which makes it even nicer. The only problem? We were out of lettuce, so I improvised and made a lettuce free salad. It was just as good - if not better. And oh so healthy. 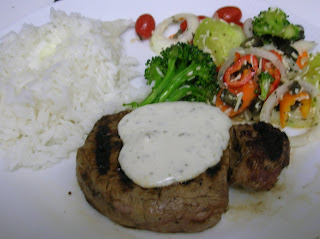 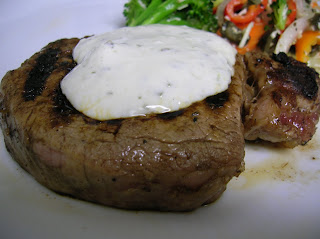 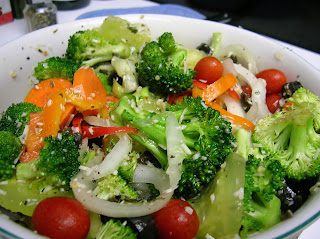