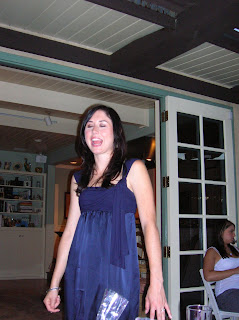 I remember the first conversation I ever had with Abby. She remembers it too. I had just got the letter from UCLA giving me the names and phone numbers of my future roommates. When I spoke to Abby, she told me she had brown hair, brown eyes, and freckles. I pictured a cabbage patch kid. I made her tell me she was adorable. When I finally met her on move-in day I found she was not adorable, she was gorgeous. One of those people that could go out in a bathrobe with no makeup and still stop traffic. And yet, she had such a "girl next door" quality that made her approachable and made everyone love her instantly. She's the kind of girl you want to hate, but can't for the life of you find a reason. We hit it off almost immediately and remained roommates for 2 years. We've remained friends even longer. 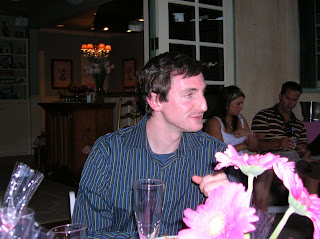 I can't remember the first time I met Andy, but I would be willing to bet it was a loud, raucous fraternity party. I'm sure I wondered what this soft spoken, kind guy was doing in a fraternity. I'm sure we hit it off immediately. See, Andy was in Jon's fraternity back when Jon's fraternity was filled with good looking AND nice guys. It didn't stay that way very long, but back when I met Andy, he filled that criteria. Later, Andy would become my "boss" (as well as Abby's) as coordinator for Campus Tours. I know I must have liked him immediately because I was constantly trying to set him up with my friends. All failed attempts.

I remember when I first found out Abby and Andy were dating. It was Abby's 21st birthday, and I had just arrived at her apartment to get ready for festivities. The phone rang. Her roommate's eyes lit up.
"It's Andy," he whispered to me.
"ANDY?" I asked.
A mischievous grin lit up his face. "I've been waiting and waiting to tell you. They've been dating for 2 weeks now."

I remember where I was when I found out Abby and Andy were engaged. We had just gotten back into the country after Puerto Vallarta and were switching planes in Arizona. I was listening to my voice mail messages as we ran to the terminal. I heard Abby's voice. I heard the news. I started screaming in the middle of the airport. It was all I talked about on the plane and the drive home.

Last night was Abby and Andy's engagement party. Although I know Abby's family as well as my own, it was my first time meeting Andy's family. It was obvious where Andy got his kindness from. They are warm and generous people, and the party was amazing. Of course I didn't think to take pictures of the food but believe me - it was incredible. They even had cupcakes for dessert! It was so great to see the families together, to catch up with Abby's sister and her new husband, and even some people I haven't seen since college. I am so happy for Andy and Abby - I tear up everytime I think about them getting married. I can't wait for the wedding!
Posted by That Girl at 8:31 AM