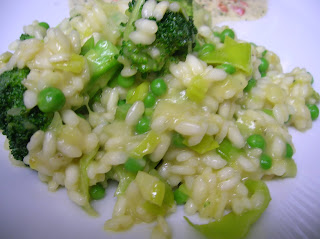 There are some foods, which just sound decadent. Risotto is one of those dishes. Simply mention that you are preparing risotto will definitely elicit some oohs and ahhs. In truth, there is nothing especially hard about risotto, but it is one to watch. Because of the constant stirring, it's a high maintenance food. But then again, I'm a bit of a high maintenance cook. And nothing compares to that rich, buttery, creamy flavor of risotto which makes it taste more unhealthy than it is. The only unhealthy aspect? The Parmesan cheese. And really, the cheese makes the risotto. I like this one because it has loads of green vegetables to make you feel like you're eating a farm - in a good way. 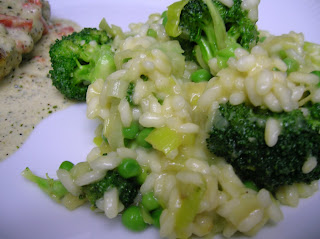 1) Heat 1/2 Tbsp oil in medium skillet over medium-high heat. Add broccoli. Sprinkle with salt and pepper. Saute about 2 minutes. Set aside.
2) Bring broth to simmer in medium saucepan over low heat. Cover, keep warm.
3) Heat remaining oil in large heavy pot over medium high heat. Add leeks and garlic. Saute until leeks begin to soften, about 3-4 minutes.
4) Add rice; stir until rice is translucent, about 3 minutes. Reduce heat to medium. Add 1/4 cup broth, stir until liquid is absorbed. Add broth 1/4 cup at a time, stirring constantly until each addition is absorbed before adding the next 1/4 cup, until there is only 1/2 cup broth remaining.
5) Add cheese, peas, broccoli, and remaining broth. Simmer until vegetables are just tender and risotto is creamy.
6) Season with salt and pepper.
Posted by That Girl at 9:20 PM