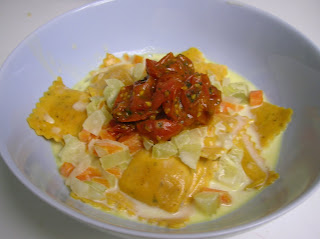 Every now and then I stumble upon something at Trader Joes which intrigues me, worms its way into my cart, and then onto the table. Such was the case with lobster ravioli. Jon was equally excited.
"What kind of sauce are you going to use?"
"Hmmm, I hadn't really thought about it, do you have a preference?"
"Something creamy"

So off I went, in search of a cream sauce that wouldn't overpower the ravioli. Along the way I stumbled into Peabody's blog. Okay, it wasn't really a stumble, since I tend to head there as one of my first steps in recipe searches. I remembered seeing something about a lobster in her blog earlier this year. And then I found it. Her grilled corn and shrimp chowder. She claims it works best with lobster. I was a little disappointed because it was soup, but then I thought - there's not a huge difference between soup and sauce, so I placed her recipe squarely on the diving board and jumped off.

I used similar flavors and techniques, and added a few twists of my own to create a creamy sauce that perfectly complemented the lobster ravioli. Top with some roasted cherry tomatoes (mmmmm I love roasted tomatoes) and the dish looks half as fantastic as it tastes. Well, Jon doesn't like tomatoes, so he preferred the dish without tomatoes, but I loved it! 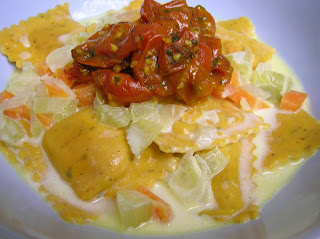 1.In a large stock pot, cook celery, carrot, onion and garlic in 1 TBSP of butter. Saute for about 5 minutes, until tender.
2.Add coriander, white pepper and chicken stock. Bring to a boil. Cover and reduce to a simmer. Simmer for about 30 minutes, while the stock reduces.
3.Add wine, cream and 4 Tbsp butter. Simmer another 20 minutes. 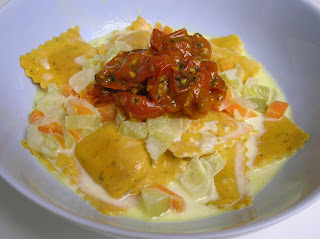 1. Preheat oven to 400.
2. Toss tomatoes with oil, salt, and pepper.
3. Spread tomatoes out on baking sheet and roast 20 min, or until skin begins to wrinkle
4. Combine with basil
Posted by That Girl at 10:12 PM