So I mentioned that my resolution this year was to run more, and I've really been working on it.

Last week I managed to get out for a run 3 times during the week, and 3 times the week before that.  Which is a 300% improvement over where I was.

I've also been great about doing pilates every day as my cross training.  I really need to get my core in shape.  I was reminded of that recently.

3 weeks ago I hurt my back, because apparently I am too old and out of shape to do leg lifts while a 7 month old hangs on to me.

I took a couple days off, but it wasn't enough.  A week later I exacerbated it so badly walking to my car that I was in spasm all evening.  I learned my lesson.  This week I took off from strength training.  I'm anxious to get back to it and build my strength up again.  It's so hard to feel so sore and limited!

Monday: 3 miles during work, along the coast.  It was insanely windy.  The wind was so crazy the day before that trees had been uprooted and  knocked over.

Tuesday: 3 miles during work, along the coast.  Most of the fallen trees had been cleared, so the only evidence I got was this: 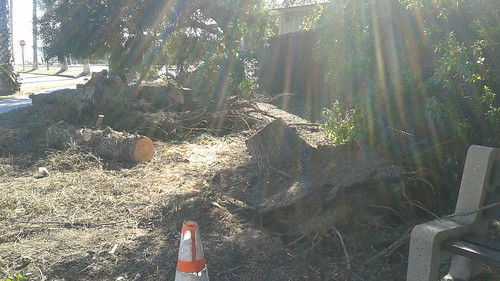 Thursday: 3 miles during work, along the coast.  It was a fantastic day for a run - clear, cool, and calm!

Friday: Stretching.  Lots and lots of stretching.
Posted by That Girl at 1:00 AM