Or the race that almost wasn't.

Or somehow bad starts always end up with good times.

This was one of those races where all my good plans just went to pot.

I set my alarm on extra loud, we all woke up and got out of the house on time.  Which was great, because when we pulled in to Mission Bay, the road was closed.  Which is weird, and should have been my first clue.  But it wasn't.

Of course, by that time, there was no way we were going to walk the mile back to the car and make it over to the race by the time the kids' dash started.  We got there about 10 minutes after that race had finished.  I felt terrible.  Thatkid had been so excited about the race.  I talked to the people running the race, and they said that if Thatkid ran the last part of the 5k with me, he could still "earn" his medal. Bonus point 1 for the race.

We picked up our bibs.  Instead of a t-shirt, this race offered light up Mardi-Gras hats.

The race had promised a bead and boa station, and the beads had been Thatkid's incentive for the race.  He wanted beads!  So we set off on a search for them.  And were disappointed there were no beads to be found.  We heard a rumor they were handing them out on the course, and I promised to get some for Thatkid.

I cheered on the start of the 15k and 10k, hit the bathroom, and then I was ready to run!  The course ran along a different part of Mission Bay.  One that was new to me.  It involved a nice, dedicated path along the water.  It wasn't terribly flat, but the hills were small and rolling. 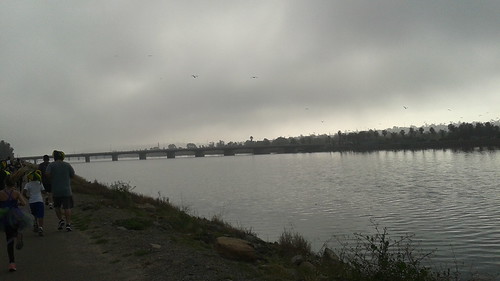 I felt good during the first mile.  It wasn't as fast as my last race, but it was comfortable.  And the field was small, so not too much weaving.  Plus, I was getting texts like these from Thatboy:

At mile 1 I looked for beads, and didn't see any.  The turnaround was at mile 1.5, where there was a water station and volunteers handing out beads and "boas."  And that's when I figured out what a bead and boa station was.  I explained to them that I wanted some extra beads for my kid, and they hooked me up.  Bonus point 2 for the race. 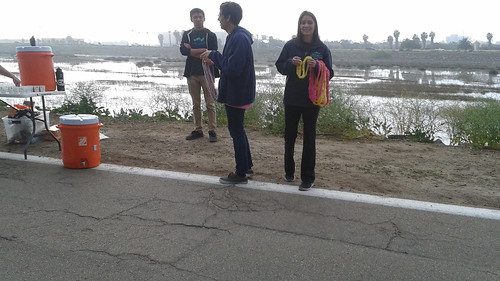 When I hit mile 2,  I texted Thatboy a warning I was 10 minutes away, so he could get in position.  I slowed my pace a smidge, because I knew Thatkid would have been rested and was going to be sprinting those last few feet.  Just after mile 3, I picked up this little hitch-hiker, and we put on some "blazin' speed" and ran to the finish line together and collected our medals. 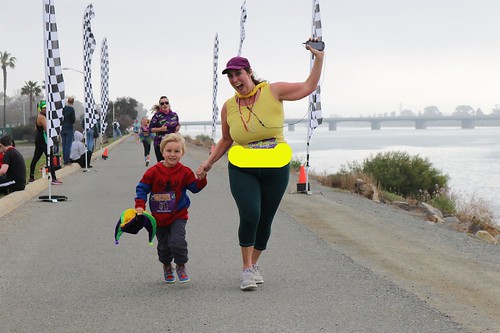 Given the comfortable pace, stopping to talk to the volunteers, and running with a 4 year old, I had already convinced myself this would be another 32 minute race.  So you can imagine my surprise when I saw my time was 30:57.  I'd finally done it!  I beat my 32 minute streak!

I loaded Thatkid up with the beads and boas.

Despite my user error, I can't say enough good things about the race.  Good course, easy parking, sweet volunteers, a cool medal, and frankly the hat is cooler than a typical race shirt.  I also told Thatboy that as bad as I felt about missing the kids' run, I really loved finishing the race with Thatkid.  He's my favorite running buddy and it just makes my heart swell to hold his hand and take off.  I love that he loves it, and I love that he enjoys doing it with me. 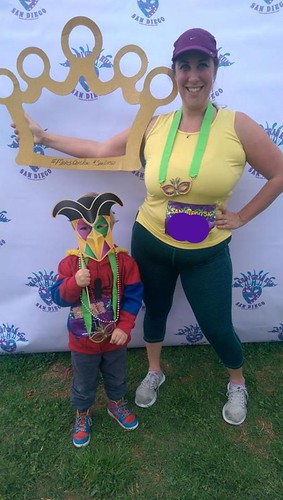