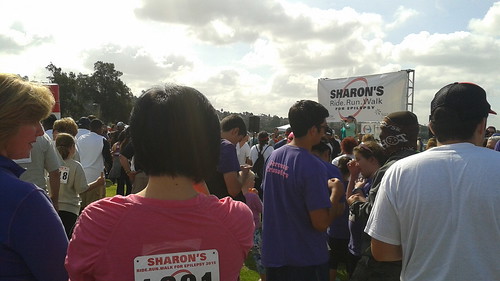 Last year I had just joined my running group and the big buzz was about "Serena's Race."  I'm not going to lie, I had no idea who Serena was, or why everyone was talking about a race for her, making a skirt for her, or involved in this race.

At some point in time, I learned more.  I learned that Serena was the daughter of another member of the group who was diagnosed with epilepsy when she was basically a mere babe.  And "Serena's Race" was an epilepsy 5k to raise money and awareness.

A little after that, I started my friendship with SD Mom and it wasn't long before I put two and two together that she was Serena's mom.  So of course, when this year's race rolled around, there was no way I couldn't take part in it.

Sharon's Ride.Run.Walk. for Epilepsy is the perfect family affair.  I was warned by my running friends that it really wasn't much of a run kind of race.  Which worked out well, since that meant I could bring Thatkid with me and give Thatboy the morning off.  (Which he used to sit around on the couch and watch racing) 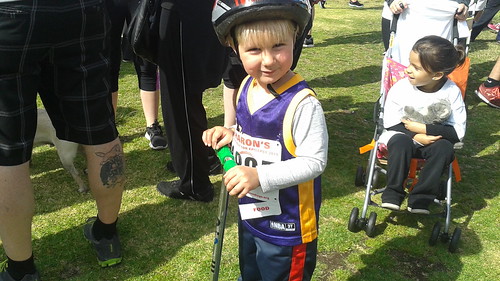 I knew Thatkid wouldn't make it all 3 miles.  Not on foot at least.  And while Thatboy usually joins in, helping to hoist the child on his shoulders, I really didn't want to deal with that.  So I suggested he bring his scooter to the race.  Which was actually a genius idea.  Because even though he got "tired" before we had even completed a mile, it was easy enough for me to pull him on it.

The race took place at Mission Bay, my least favorite race location in all of San Diego county.  But I've determined that if you're going to race at Mission Bay, a walk is the best way to do it.  No dodging random walkers, no worrying about the lack of a path.  It was really a pleasant morning.

And after Thatkid and I finished the race we got to take part in the other great aspects of the race- the bouncehouse, giant slide, and face painting.  Thatkid made sure to take advantage of all these. 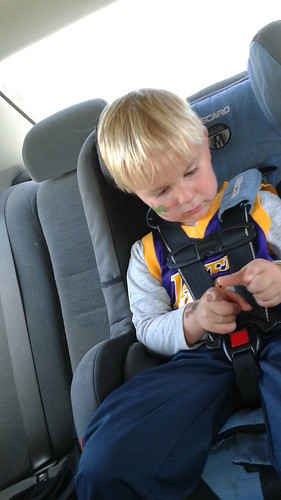