San Diego is a beer town.  There are no questions about it.  It's actually one of the perks of the races here as most of them have a fabulous beer garden with free local beer.  Which is actually not such a great perk when you're pregnant.  I miss my post-race beers.


So when I found out there was a 5k with a frozen yogurt theme, I signed up almost immediately.  I mean, who cares that I would be 35 weeks pregnant at the time.  There would be ICE CREAM at the finish!  And right now, that's way better than beer.

Which is how I ended up running what will be the last 5k of this pregnancy.  The Fro-Yo 5k. 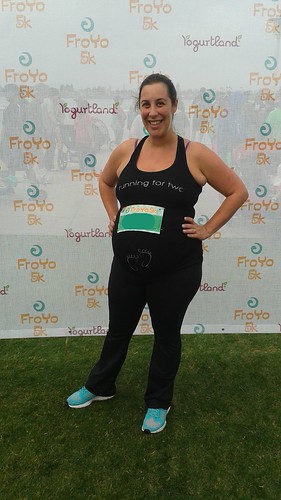 It was held at down at the San Diego Bay.  Which it quickly becoming one of my favorite race courses.  It's the same course I ran during the Fit Foodie 5k, back when I was 11 weeks pregnant.  Which I also thought would make this a fun comparison in terms of my time.

The goody bag was filled with some great swag - a hat, sunglasses, a slap bracelet, and a coupon for free yogurt! 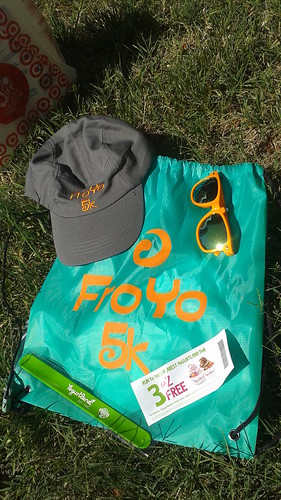 The funness of the race meant I was expecting there to be a lot of non-runners.  Which can be frustrating.  I thought the race coordinators did a really great job of trying to avoid some of the common pitfalls.  They organized the racers into waves based on time.  They also made several announcements about staying to the right so that faster runners can pass. 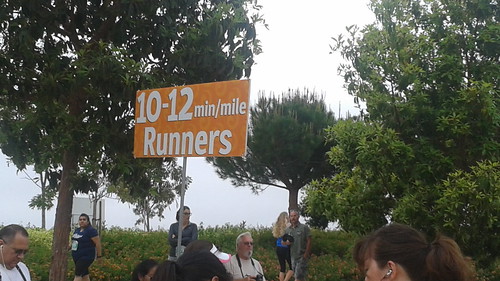 Unfortunately, the non-runners didn't heed the good advice.  I placed myself in the last wave of runners, right before the run/walkers.  And even with my super slow speed lately I still ended up passing so many walkers, who walked in the middle of the path, that I got very frustrated.  If an 8 month pregnant lady is passing you, then you probably put yourself in the wrong wave. 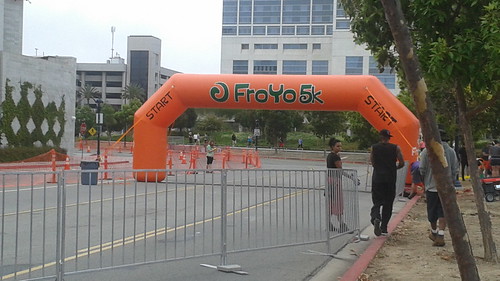 The weather was absolutely perfect and overcast for a run.  Which meant the "cool zones" which were giant misters weren't terribly necessary, but they were still fun!

My only complaint was the lack of mile markers, but I'm beginning to know the course and really, before too long, the finish line loomed before me.

After running straight to the restroom, I made my way over to the frozen yogurt line for my sweet reward at the end. 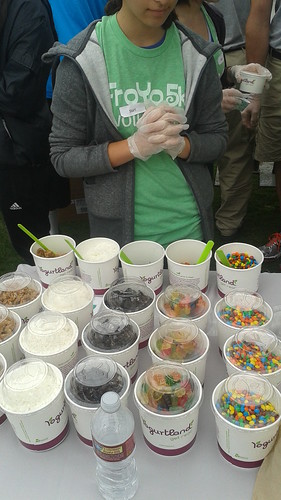 We got our pick from a couple flavors and a bunch of toppings.  I went with the regular tart and lots of gummy bears!

Just for fun, these are my 5k races times from this pregnancy: