This past week has been absolutely nuts - because of work, nothing really baby related.  But at the same time I'm exhausted because of that combined with the pregnancy.

The movement has started hitting the uncomfortable phase, in that the baby is getting bigger, but my uterus isn't, so now all those fun turns and flips?  They actually kind of hurt.  Like I'm being stretched and bruised from the inside.  And again, this is so distracting at work!  I was at a hearing on Friday and afterwards, walking to the elevator with opposing counsel I had to take a sharp breath and I swear the poor woman must have thought I was going into labor because right away she froze, eyes wide, asking if I was okay.

I am one hundred percent pregnant right now.  Obviously pregnant.  So far past the "fat" phase.  I feel like you hear about so many moms being bigger the second time around, but Thatboy and I compared the below picture with a picture I took at 28 weeks pregnant with Thatbaby and my stomach is exactly the same size. 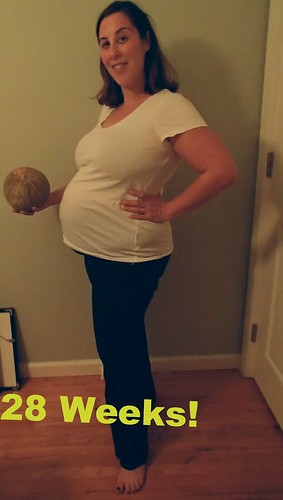 
Next Appointment: March 20
Maternity clothes? I got some new stuff in this week, which makes me very excited!  I was in maternity clothes pretty much all week.
Stretch marks: nada.
Sleep: Not enough!
Best moment this week: Running a 5k with Thatmom yesterday.  More on that next week, but it's kind of fun to do a race pregnant.
Movement: Holy moley yes.  I'm trying to work out a deal with this kid that s/he can move and groove as often as s/he likes, but not at 5am in the morning when I'm trying to sleep.  It honestly wakes me up.  This kid also gets hiccups several times a day.  Just like Thatbaby did.  And I started kick counts this week.  This week it's taken me between 3 and 14 minutes to get 10 kicks.
Food cravings: Nothing
Food aversions: Nothing
Gender: Not finding out
Belly Button in or out: In.  But it never popped last time, so I'm not expecting it to this time.
What I miss: sleep
What I am looking forward to: Another appointment this week.  On Friday.  Afternoon.  So I can cut out of work a little early!
Contractions: Maybe on Saturday?  I seriously have no idea.
Milestones:
- Starting kick counts
- Lungs are mature enough to survive outside the womb (but we'd prefer Oppo-baby to stay in longer!)
- External appearance is fully formed
Posted by That Girl at 1:00 AM