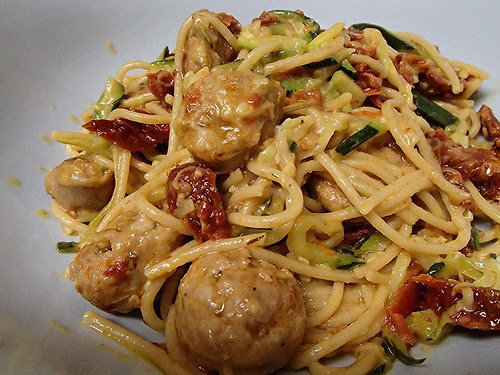 I've mentioned that during our holidays, Thatbaby was really working on his animal sounds. He is very into animals lately.  VERY.  At least once a day he grabs his farm animal book and brings it to Thatboy or I to read.

It seemed like a no-brainer to bring him to the Living Desert while we were in Palm Desert.  And he loved practicing his animal noises, even if he wasn't always dead on with what noises went with what animals (you'd be surprised how many animals say "arf arf").

One animal he's got down is the pig.  Mostly because our first night in Palm Springs we ate at Jackalope Ranch, which had pigs everywhere. 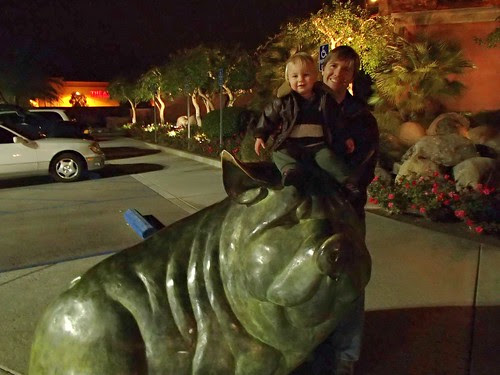 So he was very excited to see the warthogs at the zoo.  Although, truth be told, he was actually much more impressed by this little fake warthog than he was with the real one. In fact, I thought there was going to be a throwdown when I told him he had to let some other little ones take a turn. 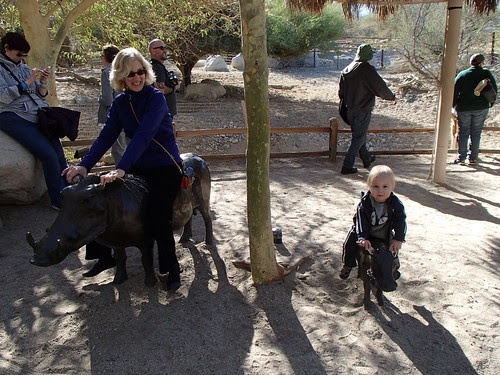 He also very much enjoyed the African village, which had lots of fun play areas for him. 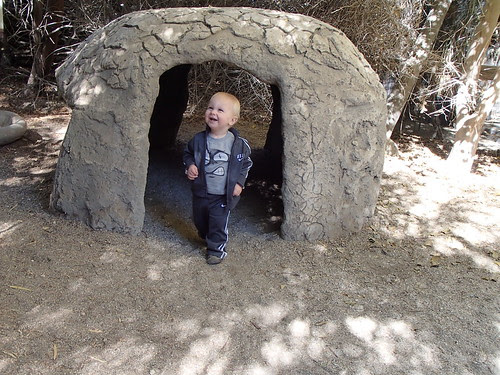 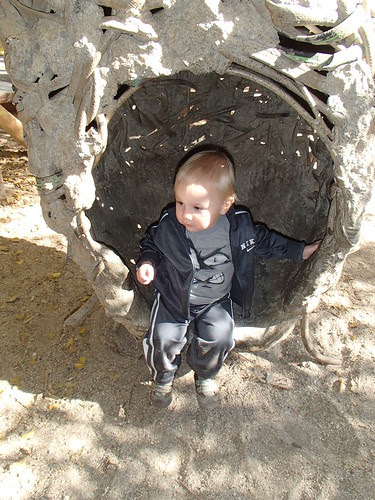 And a petting zoo!  It was his first experience with a petting zoo and he did wonderfully.  Of course, it quickly became his goal to PET ALL GOATS! 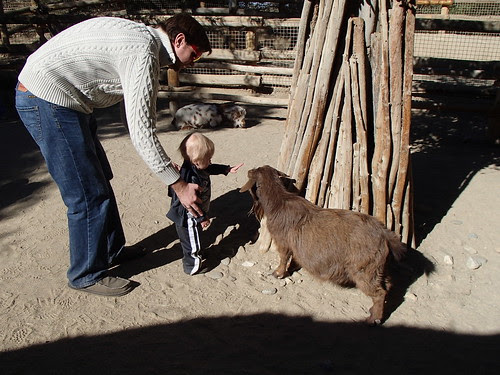 He was so very gentle with them, moreso than he is with Thatdog.  Although he has gotten a little better with Thatdog since the goat experience. 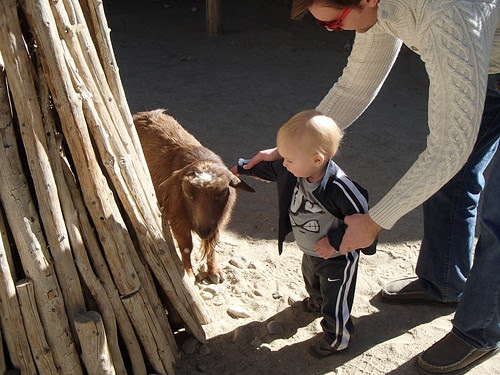 And by the way, in case you were wondering, goats?  They say "arf arf." 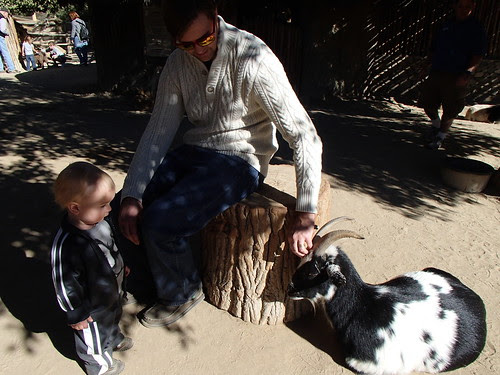 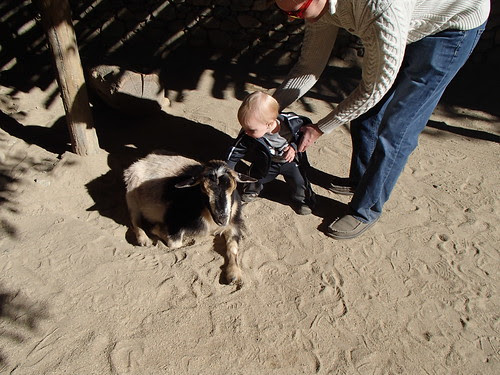 As I said, the theme of this trip was "sitting on animal statutes" and so here's another picture of Thatbaby after he climbed up and started posing.  You'd think he'd figure out these things didn't rock, but he was just as happy to sit on them stationary. 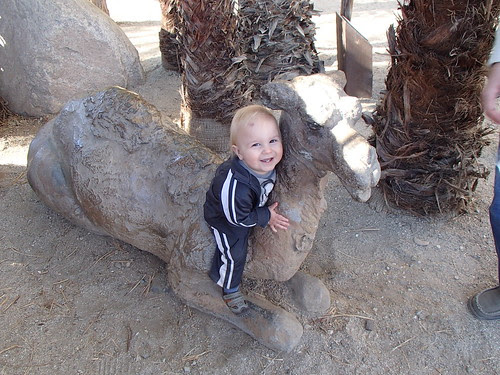 In fact, he much preferred the stationary animals to the ones that went around and around on the Merry-Go-Round.  His second experience on the carousel was a little better than the first, but he still was not happy with being strapped on and going around and around.  He still started crying and trying to get off as it went 'round. 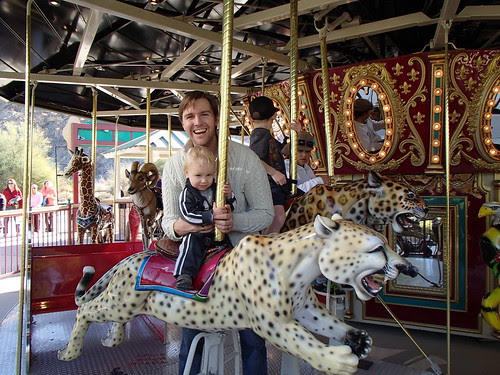 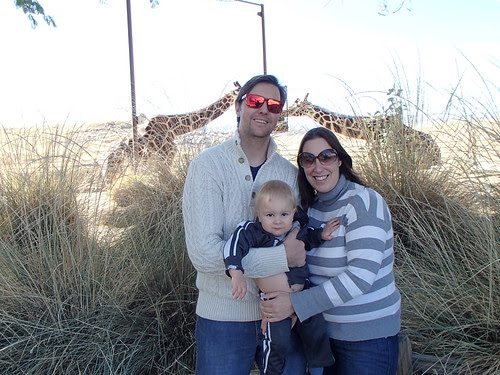 Because Thatmom just didn't get enough of us in Palm Desert, she came down for dinner last week. I did one of those things where I tried to please both of their tastes, and succeeded!  This is one of Elly's brilliant recipes.  She's my new go-to for pasta dishes.

For Thatboy, it has sausage.  He's a big fan of meats with his pasta.  For Thatmom, zucchini and goat cheese.  One of my favorite mommy and me meals growing up was pasta with goat cheese.  Thatmom would put big dollops of goat cheese in our bowls and spoon the hot pasta over.  The heat from the pasta would melt the goat cheese, and the goat cheese provided the perfect tang to the pasta.  This dish stirs in the goat cheese, but has the same effect. 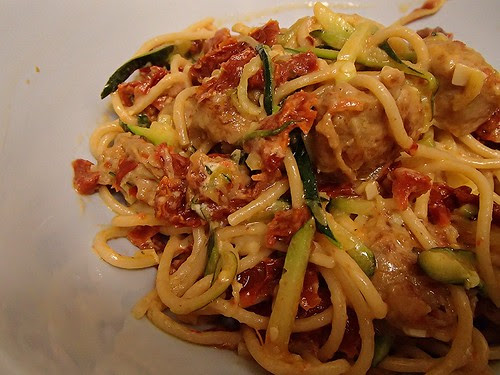