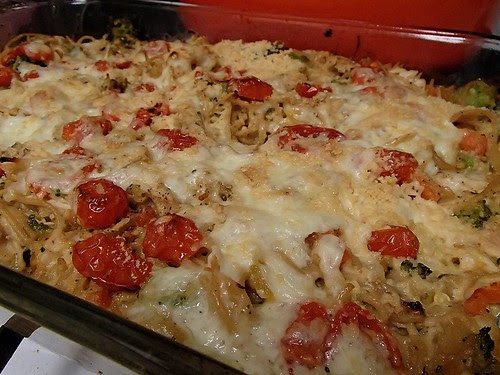 The goal of our trip was to bring Thatbaby to the snow, and so we had to find snow.  As I stated, there was snow there, but in patches.  Which meant we couldn't really play in the snow, but we could certainly use it to sled! 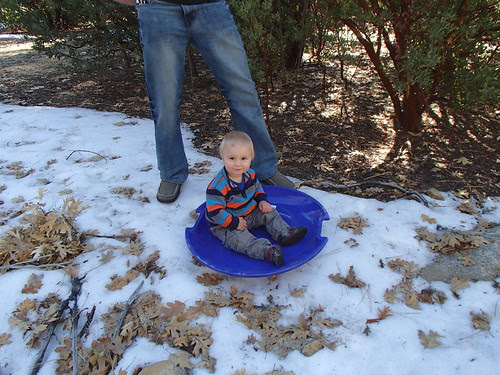 Thatbaby loved sledding.  We had a feeling he would given that he loves going fast and already enjoys riding Thatboy's skateboard and practice surfing on the bed.

It was hard to get him to stop sledding in fact.  He wanted "more."  He carried his little sled from snowy patch to snowy patching asking for "more please."  Guess he's a fan of the snow.

Thatboy was in charge of taking Thatdog for walks, and he found a great snowy hill behind our cabin. 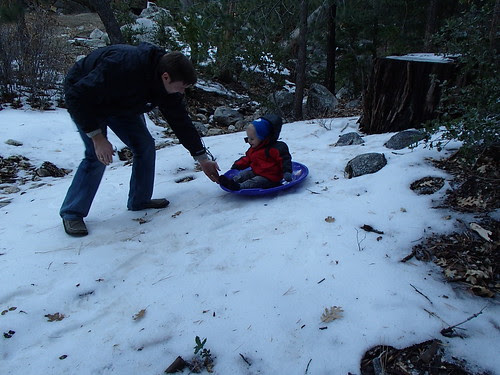 Thatbaby had to bundle up a little more, but he didn't seem to mind. 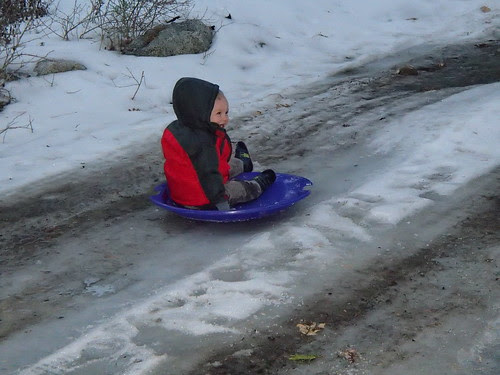 With this hill, he even got to get his hands in the fluffy stuff a little bit.

So our first trip to the snow wasn't a total disappointment.  And we know Thatbaby will be even more excited next year! 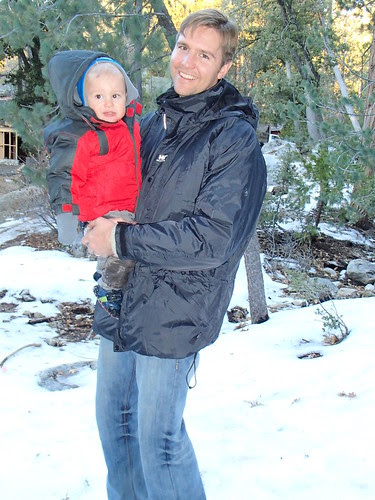 I don't know about you, but pasta is a definite winter cabin staple for me.  Which is why we ended up with Bolognese.  But if you want to bring something with you, baked pasta is easy to make ahead, travels well, and warms up very easily.  And you don't have to go with your basic baked ziti or rigatoni.  Lately I've been baking all sorts of pastas, like fettuccine and spaghetti.

This one is loaded with chicken and vegetables, but balanced with a lemon sauce, a nod to the ever popular lemon spaghetti. 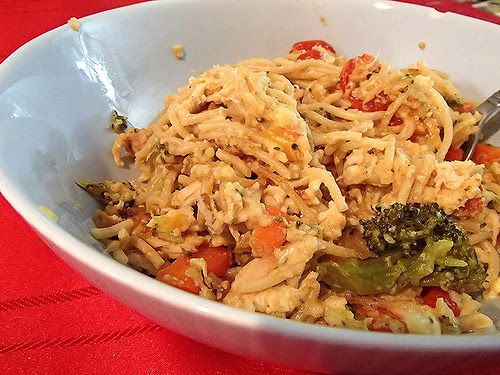 1. Preheat the oven to 400. Spray a baking pan with cooking spray.  Melt butter in a medium skillet over medium heat.
2. Whisk in the flour and stir until lightly browned.
3.  Slowly whisk in the milk. Keep whisking until the milk is warmed and has thickened slightly.
4.  Whisk in half the mozzarella, half the parmesean, thyme, lemon zest/juice and salt and pepper.
5.  Cook spaghetti according to package directions.
6.  While spaghetti is cooking, heat the oil in a large skillet over medium heat.  Add the garlic and cook just until fragrant.
7.  Add the vegetables and cook until tender crisp.
8. Toss the veggies with the spaghetti, chicken, and sauce.  Transfer to the baking pan.  Cover and bake for 30 minutes.
9. Uncover and sprinkle the rest of the cheese on top.  Return to oven and bake for for 10 more minutes.
Posted by That Girl at 9:43 AM