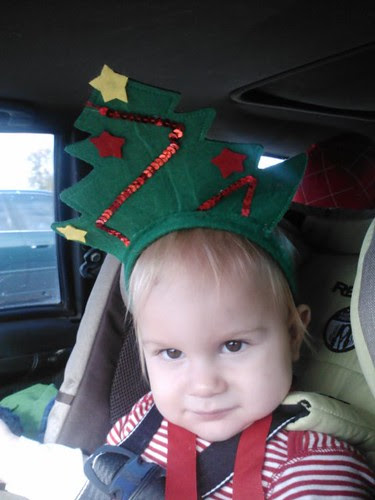 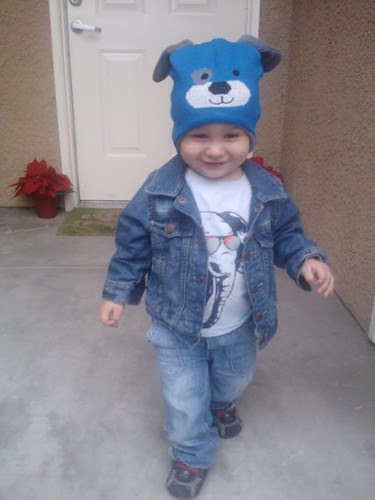 Sleep: We hit it!  The elusive sleeping through the night!  Kind of.  Before we went to the inlaws for the holidays, Thatbaby was going to bed between 7:30 and 8, and then sleeping allllll the way to 5:30/6:30.  And on the weekends, I could get him to go back to sleep until 7:30/8 if we didn't need to get up and out.

Things went downhill while we were away.  His schedule got destroyed by people who played drums during naps and when he tried to sleep at night.   And he went back to frequent wakeups.

Eating: Thatbaby has dropped almost all of his breastfeeding now that he's sleeping through the night.  I usually feed him before bed and then at that 5:30/6:30 wakeup.  He's eating a ton of food though, especially at night.  He pretty much wants to eat from the time he gets home from daycare until he's done with dinner.

Best Moment: Watching Thatbaby open presents.  It's fantastic.  He really got the hang of it.  He opened them himself, pulled them out while saying "OOOOOOOOOOO" and then hugged whatever was inside.  Unless it was one of his favorites, which he jumped on immediately to play.

My other favorite?  During the Christmas Nativity Pageant, the kids repeat what the prompter says.  So for the little ones playing sheep, you typically hear:
Prompter: Baa Baa Baa
Sheep: Baa Baa Baa 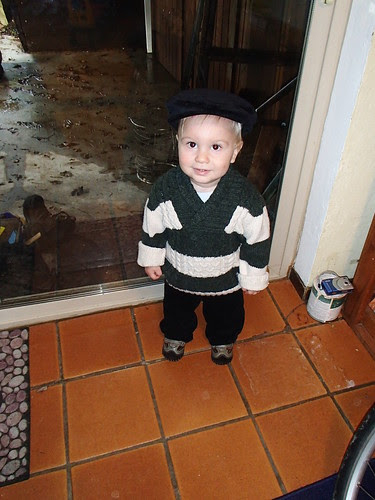 Monthly Wisdom: Things are back to normal around here! So I guess my monthly wisdom is "hang in there!" His separation anxiety has substantially lessened.  I'm sure it was partly due to the molar that came in.  But even daycare dropoffs have been pretty painless.  Except for the mean-face looks he's become an expert at.  I thought they didn't give you the "Are you kidding me mom?" look until they were teenagers.


Goals for the Upcoming Month:
- Still the babysitter.  Seriously, when am I going to get my stuff together!
- Clean and organize Thatbaby's room.  I haven't done that basically since he came home from the hospital.  And that includes all of his old baby clothes.

Things Thatbaby is doing:
- Word Explosion over here!  We've really been working on animal noises.  Thatbaby can tell you the noise made by a dog, cat, bird, lion, pig, horse and duck.  And although he's not really an animal, Thatbaby will proudly tell you that Santa says "ho ho ho."
- Thatbaby got 2 teeth in this past month.  Which explains why he's been such a mess lately.
- Thatbaby has a couple new signs - milk and please.  He actually says both of these words as he signs them.
- Mean mugging.  This kid shoots us the "Seriously?" look ALL the time. I warned daycare, and sure enough he does it there too.  And not just people he knows.  Some little girl came up to him at the zoo and the look he gave her could curdle milk.
- Communicating.  Between the signs, the words, and the pointing, Thatbaby is getting really good at letting us know what he wants.  He'll even take a hand and pull us where he wants us to go.  He also nods feverishly when you understand what he's trying to tell you.
-  Spoon and fork.  Thatbaby is fairly adept at the fork, but he's really starting to get the hang of the spoon.  For some reason when you hand him a loaded spoon it goes straight into his mouth.  When he loads it himself, he turns it over halfway to his mouth and dumps it on his shirt.
- Stacking and knocking down.  Both with his blocks and the stacking cups. 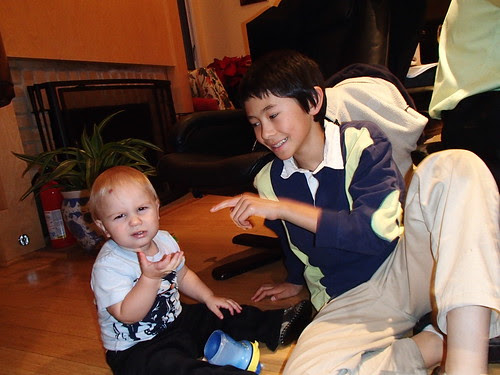