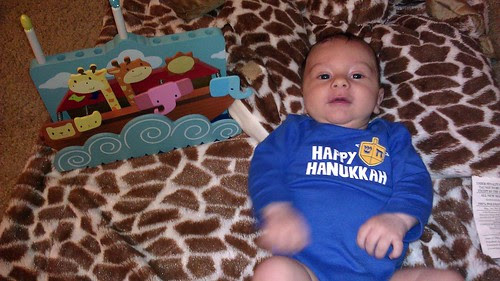 Christmas lights weren't the only lights to entertain Thatbaby this holiday season. He got to take part in his first Channukah! 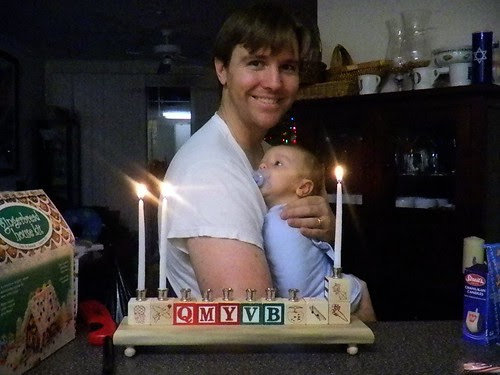 (You can see he was really into it.)

Having a new baby during a holiday that begins at sundown meant that everyone came to me this year for celebration. Usually we get together with the family up at Thatmom's house during one of the weekend days of Chanukkah. But Thatbrother and UDubb were heading up to her family the second day, which meant we had to do our celebrating the first night.

Since everyone was coming to me, it only made sense for me to whip up a fantastic dinner. 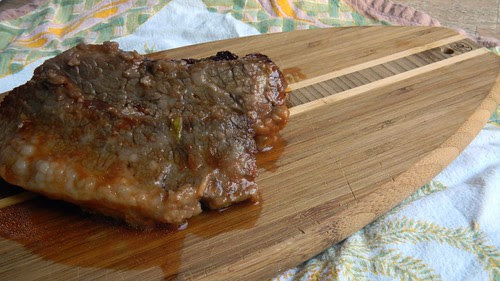 The brisket was the main attraction. I went with a traditional recipe by Joan Nathan. I've made brisket before, but this was my first time with this recipe and Thatboy's favorite. He claims to have never had a brisket like this before, but he has, he just doesn't remember. It's a recipe that couldn't be easier - combine minimal ingredients, marinate, and then throw in the oven. 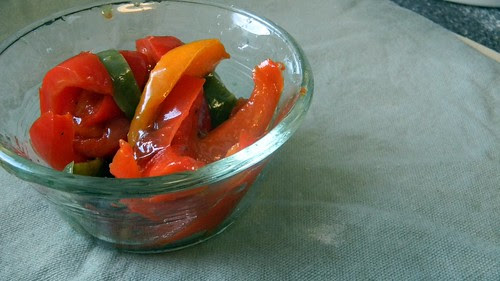 For sides there were sauteed bell peppers and a big green salad. The leftover peppers are a great addition to omelets, pizzas, or pastas. The sweetness really works well with the tangy brisket. 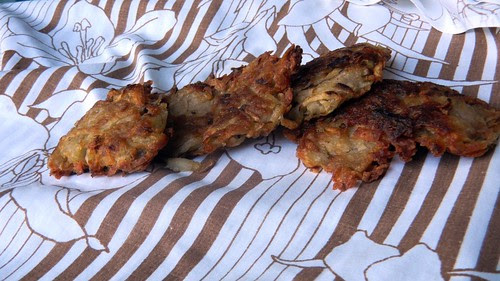 No Channukah would be complete without latkes! I've created my own little recipe which is a mix of my dad's recipe and a couple of others. It's a mix of potatoes and onions, an egg, and flour. Pretty basic, but I've found the ratios really do matter. My one egg is less than a lot of recipes and I add a little more flour to give it that nice crispiness. I also grate the potatoes and onions with a large grater, which seems to be another unique variable. I got a new food processor for Channukah that night and it would have made the grating of the potatoes and onions a lot easier. 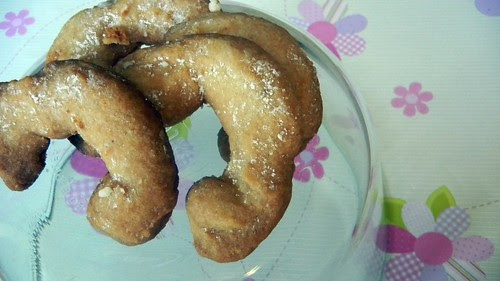 A typical dessert for Channukah would be something fried - like sufganiyot. I went with cookies instead - almond horns to be exact. Thatmom LOVES almond horns. With a dusting of powdered

sugar, they're the perfect winter treat.
Posted by That Girl at 8:18 PM