Catching up on Chili


If you've been reading this blog for any length of time you know I'm a chili fanatic.  I just can't get enough.  Especially in the fall/winter when the weather gets cold.  I've been lagging a little this year on my chili-ing, but partly that was because the weather had been so temperate.  Our typical December Downpours were practically non-existent.

And then January rolled around and the weather has gotten cold and wet.  Hello winter in Southern California!  And so I've been in chili overload.  (Is there really such a thing?)  Thatboy is ever so patient, but I know if I'm not careful he'll ask me to give it a rest.  (We haven't had ham in ages since it overstayed its welcome in Thathouse.)  So I've been good about only putting it on the menu one day a week.  Week after week.

And I've been switching up the chili quite a bit.  White chili, chicken chili, beef chili, turkey chili, with beans, without beans - Chili is one of those rare dishes that can be completely different from day to day.

I've been using some of my old favorite recipes, but I've also been blog-hopping to try new ones.  I should probably point out that my secret to perfect chili is using Muir Glen Fire Roasted Tomatoes with green chiles.  So any chili recipe that calls for tomatoes gets those.  Below you'll see two new-to-me recipes where I've tweaked the recipes a bit, including adding my favorite canned tomatoes.

The first new one I made is a slow-cooker chili.  I love the idea of using a slow-cooker to cook my chili so I can spend less time in the kitchen.  (Especially important when my weekday runs were amping up in mileage)  Plus we're big fans of the spice of Chipotle peppers.

My complaint about this chili is that it didn't have much of a sauce.  It was tender beef, beans, and tomatoes, but it wasn't very stew-y or chili-y. 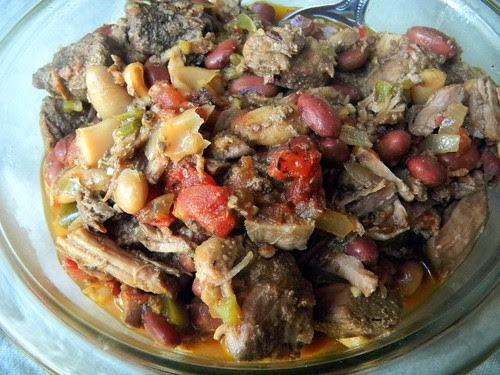 
The next chili we tried was fantastic.  New favorite in Thathouse.  It's not a slow-cooker chili, but it comes together so very quickly that you won't even mind.  I've made turkey chili a number of times, but this was the first time I used black beans in a chili.  And they really work.  This was delicious the first night, but there was clearly not enough left over.  I'm warning you in advance so you can make more than I did.  Because I wanted more. 
And stay tuned because believe it or not, chili is on the menu for tomorrow night too!
Posted by That Girl at 10:22 PM