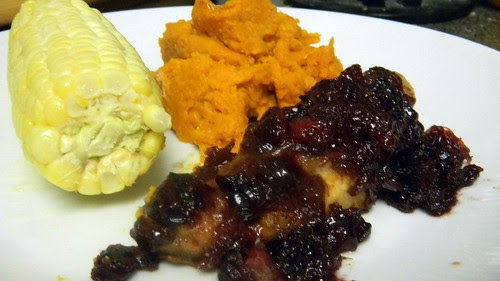 The only difficulty with having Thanksgiving at Thatmom's house is the lack of leftovers to play with. Usually there's enough for "second Thanksgiving" the next night, but that's pretty much it. And leftovers are never fun when you're eating them the exact way as the night before.

Luckily a lack of leftovers on my part doesn't stop me from sharing some great ideas with you. Because while I don't have leftovers from Thanksgiving, I do have the raw ingredients that many of you may have used in your own Thanksgiving feasts - namely, sweet potatoes and cranberries.

I've been using fresh cranberries a lot this year - ever since they showed up at the market. Mainly because last year I started getting cranberry antsy about a month or so after they had disappeared and so I've been storing up some good ideas since then. I made my own cranberry relish a few days before Thanksgiving. Between that and the cranberry butter, I had some leftovers in the bag which I felt would make an excellent topping for chicken. Reduced down to a thick and chunky chutney, this would work equally well over pork or turkey. 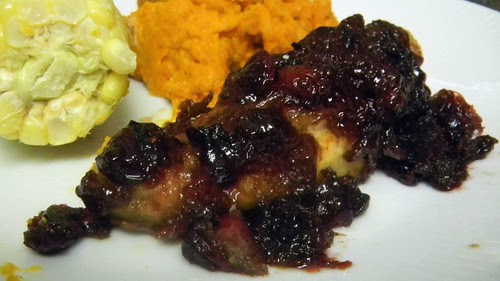 Cranberry Chutney
3/4 cup water
1 cup brown sugar
1 Tbsp cider vinegar
1 Tbsp flour
1/2 tsp cinnamon
1/4tsp allspice
1/2 tsp salt
2 cups fresh cranberries
This year the sweet potatoes at our table were replaced with delicious butternut squash. But that might not be the case at your house. In years past there has been a bowl filled with baked potatoes - both of the regular and sweet variety. And there are always some leftover. Mashed potatoes are a great way to use up leftover baked potatoes, but these are so great and seasonal you may not want to wait until you have leftovers. Growing up, Thatdad would make squash with brown sugar and cinnamon, so the use of sweet additions to the mashed potatoes isn't too much of a shock. The maple and brown sugar make the sweet potatoes even sweeter, and there's something so perfect about maple syrup this time of year. 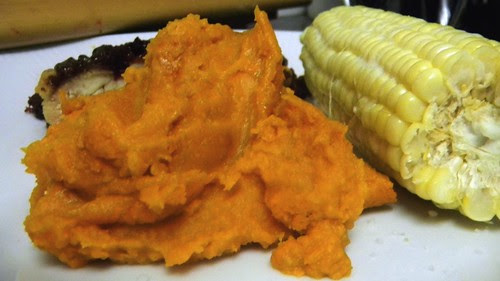