The beginning for birthday boy 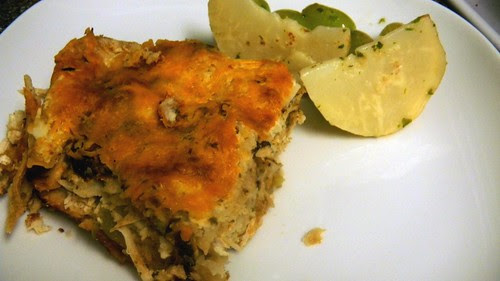 A couple of weeks ago, when we were both still home with the new baby, Thatboy went surfing with one of his friends. When they came back, the two were talking about Thatboy's upcoming birthday. The friend noted that Thatboy had already declared that this year his birthday "was going to suck."

And then, of course, he met me. While dating, we still did separate family Thanksgivings, but once we were married he started attending the one my family hosted. And I started making a big deal of his birthday. The first year I decorated our entire apartment with balloons and streamers while he was out surfing. And when we reached my parent's home for Thanksgiving dinner, it was similarly outfitted. Since then, I've always made a big point of making his birthday extra special - whether that meant a surprise trip to Vegas to see one of his best friends, or driving around Thatboy and 14 of his favorite friends on a beer extravaganza.

This year, however, I really dropped the ball planning-wise. I blame the whirlwind that was our life in October, but at the same time, feel like I certainly had enough time to do something. And so last weekend the call went out. I emailed a couple of his friends to see if we could get together as a mini-surprise for his birthday and planned a day of fun for him. I'll fill you in on that tomorrow.

One of the people I reached out to was Workwife, who then decided to take it upon herself to make sure there was also a work celebration for Thatboy. (See - that's why she's his Workwife.) She initially emailed me to see if Thatbaby and I could make it to a lunch next Tuesday, but when I pointed out that Thatboy would be out of town for work that day she moved the lunch to Friday.

And so Thatbaby and I headed downtown yesterday to join in the frivolities with Thatboy and his coworkers at Extraordinary Desserts. Thatboy was very excited to try their dulce de leche cake which he had seen on Food Network's "Best Thing I Ever Ate." What? Your husband doesn't watch the Food Network when left to his own devices? There must have been nothing on Fuel TV. So after our lunches he ordered a slice and it was passed along the table. The consensus was that although the cake was delicious and decadent, it was a bit of a misnomer to call it a dulce de leche cake. More like a "chocolate cake with a smear of dulce de leche on top."

When Thatbaby and I got home, I set about making a quick and easy dinner. I know, you're all anticipating pasta, but I thought I would change it up a bit. It'd been a while since we'd had chicken, so I decided now was as good a time as any to start working it back into our meal plan. The original Tuesday lunch plan was at a Mexican restaurant, so when we switched over to Extraordinary Desserts I still had a hankering for something with a bit of Mexican flavor. Good thing I keep tortillas in the freezer! A casserole style dish is one of the easiest ways to make an easy dinner - since I can get all the flavors without having to stand over the stove playing with spices and heat. Just layer it all up and let the oven do the work.

And, like I said before, I'm going through a mild obsession with celery root. This one does require some standing over the stove time, but it cooks so quickly that I could wait until Thatboy came home and took over the baby to make it. And it combines some fantastic fall flavors - celery root, apple, and grape. With the cider and grape it's also good for those of you with a sweet tooth. Maybe not an extraordinary dessert, but definitely an above average side. 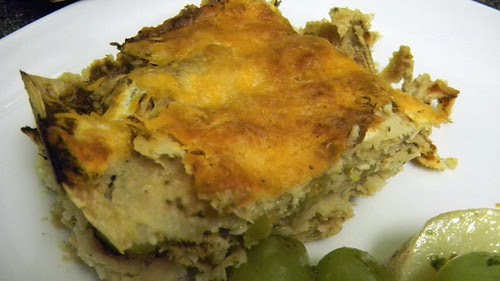 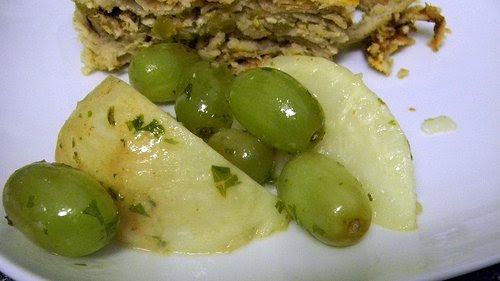 Celery Root with Grapes
1 celery root
1 cup apple cider
juice of 1 lemon
3 Tbsp of butter
1 Tbsp of parsley, minced
1 cup of green grapes
salt and pepper
Posted by That Girl at 12:01 AM