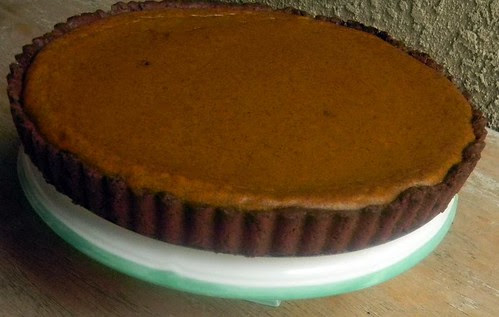 Next week is a big week in Thathouse. The most obvious is Thatboy's birthday. I've been prepping for it all week. In fact, today Thatmom came over today to babysit so I could run around picking up presents for Thatboy.

But most of you won't be celebrating Thatboy's birthday (although all presents can certainly be directed here if you're interested in this very important event). For the rest of the nation, the big event for next week is Thanksgiving.

Don't worry - I'm prepping for that too. As usual, I assign myself dessert for our family Thanksgiving. Partly because I've taken over Thatdad's role of making ice cream. Partly because I make the best pumpkin pie.

Every year I try to do a little something different with the pumpkin pie. Last year the request was to make the crust with graham crackers instead of a traditional pie crust. I've done a pumpkin caramel pie and a pumpkin pecan pie. This year I decided to again play with the pie crust. Instead of the traditional pie crust, or even the graham cracker crust, this year I went with a chocolate crust.

Since I don't do a lot of chocolate crusts, I went over my options:
1 - chocolate wafer crust, which is usually what I do for pies. But it's a little dry and not too flavorful.
2 - oreo cookie crust, which seemed like it would be weird with pumpkin pie
3- chocolate shortbread crust, something I've never tried before, but comes from Dorie Greenspan's book and she knows her desserts.

So as you all know, the best time to try something new is when you're making it for a large group of people. This is why you'll see most people decide to host Thanksgiving and make a giant turkey for 50 people and start preparing the night before. Luckily, even though it wasn't a good idea I seem to take this risk every Thanksgiving, so why stop now? New untested crust it is! 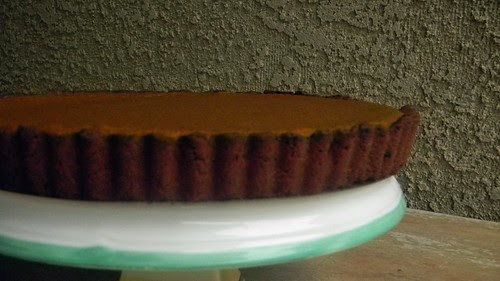 Pumpkin Pie with Chocolate Shortbread Crust (adapted from Baking: From My Home to Yours by Dorrie Greenspan)
Posted by That Girl at 11:30 PM