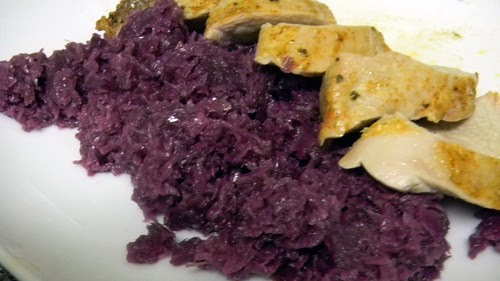 My friend Elly once told a story about her husband cooking something. The story entails her having to give him step by step instructions which led to more questions than he had originally and her doing far more work than she would have expected since he was doing the cooking. It was hilarious in that many of us could relate to the situation where a helping husband is more trouble than help.

Thatboy is always offering to help in the kitchen, but in truth, I rarely let him. I've tried on a couple of occasions which resulted in sriracha and spaghetti, and me having to walk him through dumping a frozen bag into a skillet. Usually I give him a simple job to do like shucking peas.

But throw a kid into the mix and you start turning to help in unlikely places. It was easy when we had frozen meals. Thatboy has become very adept at heating up frozen entrees in the oven. (Especially when his wife writes instructions on how to reheat on the foil covering it.) It's a little more difficult once those freezer meals are gone.

This is a dinner that was a complete joint effort, due in part to a fussy child. So while I took care of the baby, Thatboy asked if he could help get dinner started as it was getting late. I told him he could do the pork tenderloin if he was so inclined. Which really entails him running back and forth between the kitchen and the baby's room between each step as I dictated. Because of that, try to picture a 2-3 minute pause between each of these interactions.

Me: Turn the oven up to 375 and rub the pork with olive oil and seasonings
He: What seasoning should I use?
Me: You can use any seasoning you like. We have an entire shelf full of them.
He: I don't know what seasoning goes with pork.
Me: Well, I usually like rosemary. Why don't you use some rosemary, salt, and pepper.
He: We don't have any rosemary.
Me: I find that hard to believe. Did you check the spice shelf?
He: yes
Me: And the spice rack beside the oven?
He: Yes
Me: Uggh. I can't find it for you, I'm kind of stuck with the baby here. Why don't you use Cajun seasoning? We have two different bottles. The front one is unlabeled and that's the Emeril seasoning. The other is a giant bottle that says "Cajun seasoning" you can't miss it.
He: Which one should I use?
Me: Whichever you can find - I'm trying to make it easy for you. We've already been at this for about 15 minutes and the pork isn't even in the oven yet.

After that it got quiet for a bit, so I figured we were all good. Until of course the pork actually went in the oven and Thatboy needed advice on how long to set the timer for. And around this time I was ready to rejoin him in the kitchen and get to work on the side dish. So while the pork cooked, I tossed together some cabbage and bacon. But this time, I also added some apples. Sweet apples, bitter cabbage, salty bacon, along with some vinegar - all work together to create a sweet and savory dish. Better than coleslaw and a perfect fall dish. Especially served alongside some pork. And as for that pork? It came out delicious. I'm sure you're as surprised as I am. Although I think that I might be off the hook for cooking pork tenderloins. I might make them Thatboy's specialty for nights I want off! 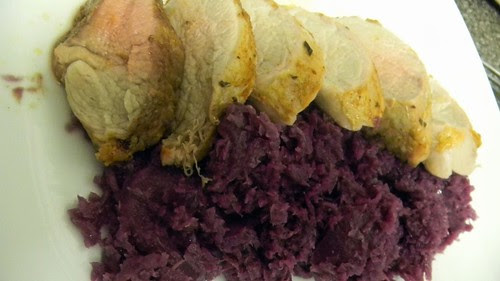