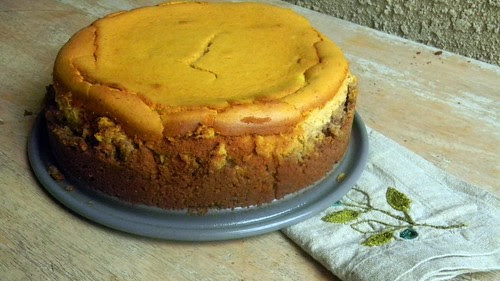 Every year during the fall season I end up making a pumpkin cheesecake. I think it goes back to when I was in college. Every fall The Cheesecake Factory would have pumpkin cheesecake as their seasonal menu choice and 2 of my girlfriends and I would mark the date it came out on our calendar. We'd find a way to get to the nearest outpost and indulge.

For some reason, I remember it marking the celebration of some annual event - but given the time of year it could hardly be finals. It might have been midterms. Then again, it might have just been an event to celebrate the annual arrival of pumpkin cheesecake.

I don't think I've been back to The Cheesecake Factory to sample their pumpkin cheesecake in years - definitely not since college and that was many many moons ago. But once I started living on my own and cooking and baking pumpkin cheesecake seemed to make an appearance despite the fact.

It started out with Peabody's Pumpkin Swirl Cheesecake. Which evolved into a version that was less swirl, and more pumpkin. And then a couple of years later I discovered my go-to cheesecake recipe, Ruth Reichl's New York Cheesecake. Over the years I've worked to make a pumpkin cheesecake that was more similar to that than the original.

I don't usually bring a pumpkin cheesecake to Thanksgiving, mostly because it's been made and eaten by that time. But this year has been a little different and I haven't had time to get my pumpkin cheesecake fix in. So I'll be sharing this with family at our Thanksgiving table. For those of you who want something a little different than Pumpkin Pie, this is a great alternative. Although in my mind you can never have too much pumpkin anything, so might as well serve both! After all, pumpkin is certainly cause for celebration. 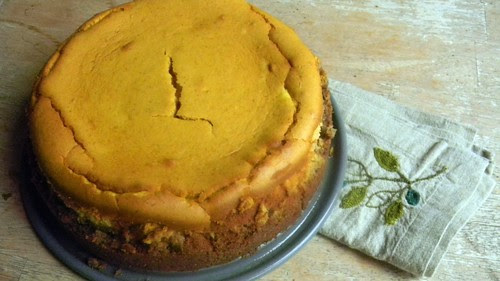