How I spent the rest of my vacation

I was really looking forward to the Thanksgiving holiday at Thatmom's house. "Aha!" I thought, "I'll finally get a chance to relax." My reasoning was based on the fact that since I wasn't at my home, there would be no urge to do cleaning, laundry, cooking, etc. Just some good old fashioned catching up on sleeping and vegging on the couch.
In retrospect, this was a ridiculous notion. When I confided in Thatboy what my plans had been he shook his head, bemused I would even consider that. Thanksgiving weekend for us is always jam-packed with activities, most of which involve holiday shopping. There is no rest for the wicked.

Friday morning found Thatmom and I heading out for a run, but not before Prez came over to meet Thatbaby. She moved to San Francisco in August and this was her first chance she was able to meet the little guy. After our run, we headed out to hit up some Black Friday sales. Thatboy and I aren't crazy enough to head out at dawn, and we're not interested in the big ticket items, but we like to wander the aisles, picking up cheap cds, games, and other odds and ends for gifts. As soon as we got home from shopping, we passed Thatbaby off to Thatmom and headed out for Thatboy's birthday dinner at The Side Door - his favorite Orange County restaurant.

Saturday was equally busy since Thatboy had giftcards burning a hole in his pocket. So we headed out to the mall where he unloaded them on shoes and sunglasses. Mario Batali recently opened a new outpost of his Pizzeria Mozza in Orange County, so we ventured there for lunch before heading back to the mall for some more shopping. On the way home we stopped at Roger's Gardens so Thatbaby could have his first meet n greet with the man in red. 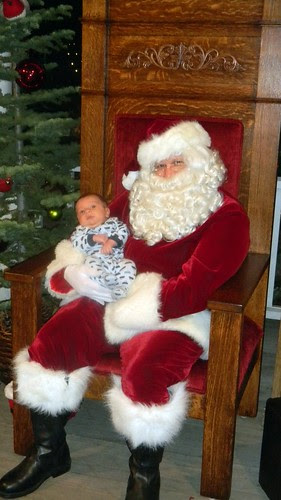 He was in awe of the lights and colors so I'm really looking forward to how much he'll enjoy Christmas - the tree goes up next weekend!

Before I knew it, Sunday rolled around. Time for one last breakfast with the family at Pacific Whey! Then Thatmom and I went for another run. After that it was time to load up the car for our trip home. We got home in time to get preparations underway for the week - so we can start all up again.

In honor of the Fall Harvest, and because there was decidedly little cooking this weekend on my part, I thought I'd feature what has been gracing our table often as of late - the last of the summer corn. I think Thanksgiving officially marks the end of corn season, and I'll be sad to see it go since late corn is always the sweetest - don't you think?

The beauty of corn is that when it's good, you don't even need to cook it. You could eat it right off the cob. But that means keeping cooking preparations simple is the rule. Why mess with a good thing? 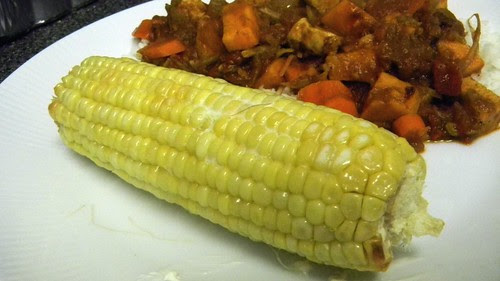 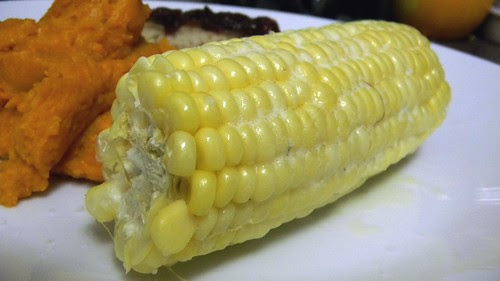 Broiled Corn
2 ears of corn
butter
salt
Posted by That Girl at 2:34 AM