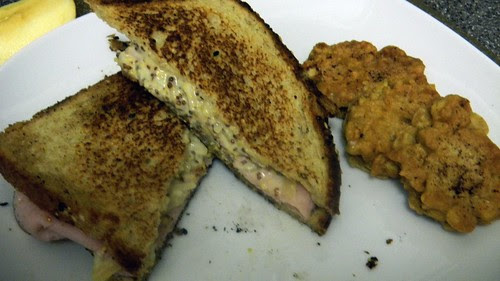 When Thatmom met Thatdad she was an English major in college. Her career ambition was to go to the Sorbonne and translate French poetry. That obviously didn't work out.

Instead she went to nursing school and had a beautiful, smart, charming, and overall wonderful baby girl. And when that baby girl was a child, the family took a trip to Montreal where a sweet waitress, impressed with the girl-child's beginning French offered to take her and raise her and teach her French. That obviously didn't work out.

Instead the girl-child went home with her family, and began taking French classes as soon as she was able. She began reading novels in French, coaching teams for French competitions, and even winning a couple of blue ribbons herself. When she graduated high school, she applied to college in Montreal with the goal of teaching French. That obviously didn't work out.

Instead she has had to make do with eating lots of French food. Like turning a simple ham and cheese sandwich into a gourmet French dinner. Especially since she has currently become obsessed with the pre-grated swiss/gruyere mix at Trader Joe's. The perfect flavor for just about everything and great for melting. Which makes it really nice for any sort of grilled cheese sandwich. C'est magnifique! 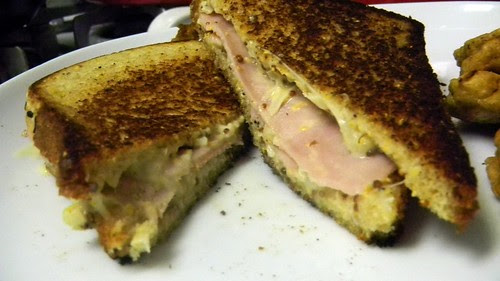 Croque Monsieur
1 Tbsp crème fraîche
1 Tbsp dijon mustard
1/4 cup Trader Joe's shredded swiss/gruyere mix
4 slices of bread
2 slices ham
2 Tbsp butter
To keep this truly authentic you should probably serve it with pomme frites, but as I mentioned before, we're corn crazy in this house, so I instead of pomme frites, I made mais frites - or corn fritters. 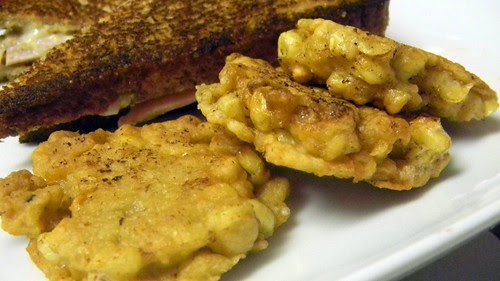