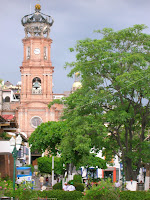 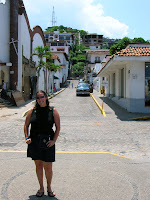 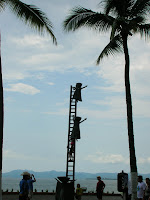 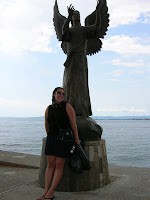 Downtown Puerto Vallarta
Downtown was by far my favorite part of Puerto Vallarta, most specifically, the Malecon. The Malecon is a boardwalk like walkway that borders the bay. Everytime we walked the Malecon it was a completely different experience. Some days it was filled with families, other days art lined the street, and of course there was always plenty to see. In addition, there are sculptures that line the Malecon and visitors are free to climb on them, sit on them, whatever. 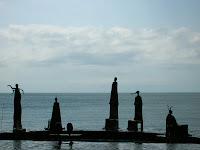 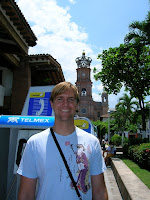 Of course there is also plenty of shopping downtown. We hit up both the touristy shops as well as the mercados - merchants in stalls. We picked up a molcajete for me to make my guac in as well as some cigars for Jon. (He only smokes on special occasions) He picked up a Mexican cigar Alex had recommended the night before, as well as a cuban. 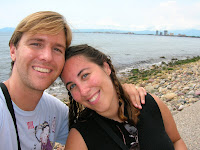 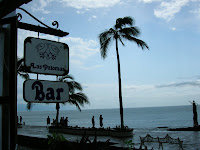 As we were walking around, it began to rain. We saw a bar called Los Palomas and decided it was a good omen. We headed in to seek refuge. The rain here doesn't last very long, but it was long enough for us to have a couple of tequilas. I had read that THE way to do tequila is paired with a shot of sangrita, so Jon and I ordered tequila con sangrita. Sangrita is a spicy juice (orange, tomatoes, and chilies) which cleanses the palette between sips of tequila. We really enjoyed the experience, and picked up some sangrita to take home. Jon enjoyed his Mexican cigar and we were out on the street again. After exhausting ourselves, we headed back to the hotel for dinner at The Paradise. Dinner wasn't as good as Salvadors, but it was still pretty good. AND we ordered sexy coffee with dessert. This was sooo much fun. The coffee is made table side and its quite the fire show as alcohol and cinnamon are lit on fire and spun, poured, and finally combined and topped with whipped cream and a cherry. It was warm, spicy, and alcoholic - delicious. 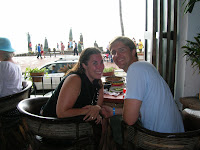 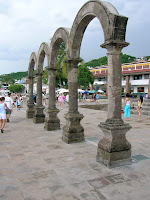 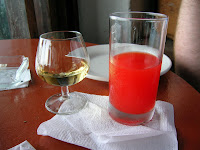 Snorkeling
We signed up for a snorkeling tour through Vallarta Adventures. We began with a 30 min. boat ride out to the Marietas Islands. This group of 3 islands is really the tops of 3 underwater mountains. Pretty cool huh? The snorkeling was great! I don't have pictures yet, because we haven't developed our underwater cameras, but we saw an octopus, eels, and tons of fish. It was very cool. The water was soooo clear! Jon even got to jump off the boat - which always makes him happy. After we were snorkeled out, we had lunch on the boat. Nothing fancy, but still it was so filling! And then we were off again, this time to a private beach by Punta Mita. The beach was really gorgeous, it backed against a wall of green hills, and the water was turquoise blue. The sand was white. We lounged in the water, before Jon started playing football with the other guys and I headed to the shore for some sun. It was soo perfect! When we got back we had dinner over at the sister property again at the French restaurant. It was also pretty good, and they have a "no kids under 8" rule, so that was nice too. 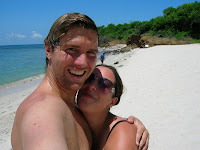 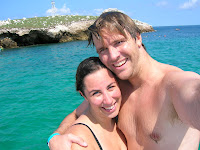 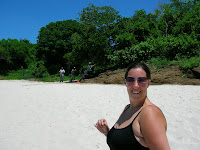 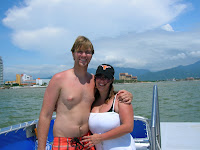 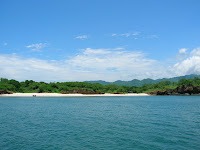 More adventures to come in Part 3!
Posted by That Girl at 1:24 PM