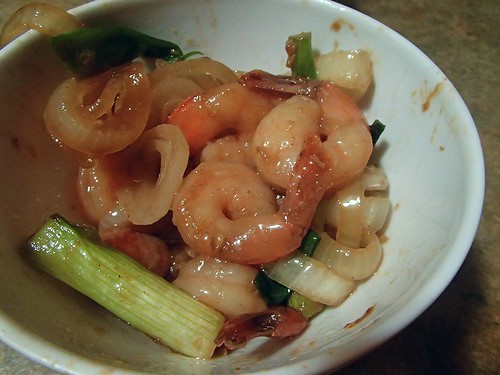 Last year, Thatbrother and I decided to make a pact for a yearly visit to Toxicesq.  Basically like a yearly family reunion.

This year, we decided to plan our trip for March.  Which coincidentally is also when Thatmom's birthday is.  Her 60th birthday.   With that in mind, Thatbrother decided to plan her a surprise birthday party, in Arizona.  He sent out emails to the whole family, planned our itinerary, ordered a cake, and made reservations.  As far as Thatmom was concerned, it was a trip with just her immediate family, the weekend after her birthday.

We set out for Arizona, and at some point in the morning got a call from Thatbrother.  Something had come up and he wasn't going to be able to make the trip.  Which was a complete bummer given how much work he'd put into it.

We arrived in Arizona around dinner time and met Thatmom and Toxicesq at a restaurant near the hotel.  After we ate, Thatboy, Toxicesq, and I raced to the hotel - where everyone was waiting, and Thatmom's boyfriend conveniently missed the turnoff to the hotel.

Toxicesq had picked up the cake for Thatbrother and it was waiting at the hotel for us.  We arranged it on the table and yelled surprise when Thatmom walked in.  We pretended that this was her big surprise.

But as we were cutting it, the real surprise came out - all our family, singing happy birthday.  Thatmom was so surprised!  It took her a minute to figure out, but once she did, she started crying.  Family means more to her than anything, and her birthday wish is always to spend it with family.

The next morning we all planned to head to Toxicesq's house for breakfast, but one impediment after another had us turning around and heading to a restaurant beside the hotel.

We split up for the day.  Everyone went to watch a spring training game, except Thatmom and her boyfriend.  Thatkid, who adores his grandmother, wanted to stay with her, so we all went to Toxicesq's home for some swimming.

We all met up together for dinner, then went back to the hotel for some games.

The next morning we made it to Toxicesq's house for breakfast!

Then the rest of the group headed home, and we spent the day with Toxicesq.  More pool time!

The trip itself was really rough. Thatbaby was teething and sick and up all night every night.  But it was worth it to spend time with Toxicesq, and surprise Thatmom.

With all the traveling, I'm really phoning it in on the rest of my life.  I'm exhausted!  My house is a mess, and dinners have been complete throw-togethers.  Which doesn't mean that they aren't tasty, but I'm reverting to the basics.  Shrimp is my go-to easy meal since it cooks within a matter of minutes.  My basic stirfry sauce is fish sauce, ginger, and soy sauce, so that gets tossed in next.  You could add a lot of other vegetables, but I've been lazy lately, so onions it is! 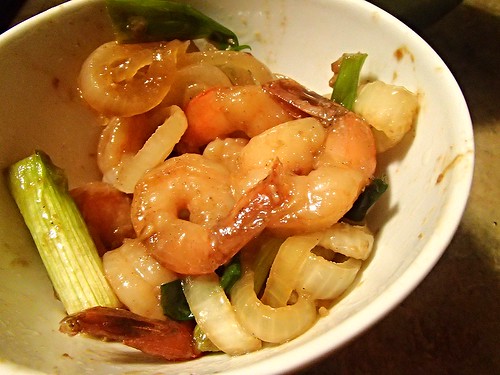