Now that we're back from our travels, I thought I would share how things went.  Especially since I was so nervous about how we were going to do it.  We had an 8 hour car ride and a plane flight this month.  So below are my travel tips specific to those.

The main tool in car trip travel is distraction.  We accomplish that in 3 ways.   The first was specific to Thatkid - a tablet. 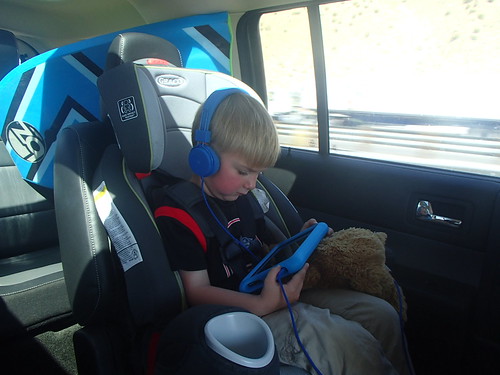 I'm not anti-screen time in the slightest.  Thatboy and I love watching television and I couldn't wait to share my favorite movies with Thatkid when he was old enough.  But at home, we limit screen time to the television.  Which means when I pull out the tablet for car rides (and airplane trips) it keeps Thatkid entertained for much longer.  Kind of like the "new toy" theory.

Thatbaby is still a little young for the tablet. And I'm not going to sugar coat it.  Keeping him entertained was far more difficult.  He did okay while he was asleep.  The problem was, he did not want to sleep.  And spent most of the time he was awake, screaming. 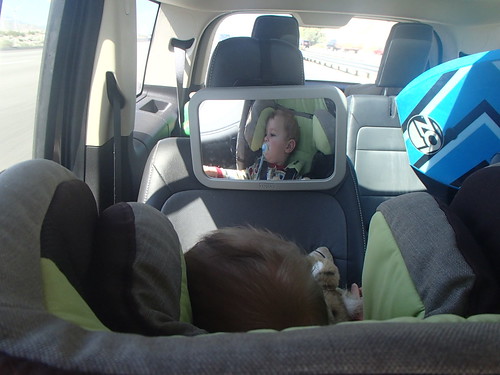 Which brings me to distraction technique #2 - food.  This may not work for everyone, but it does for my 3 boys.  This goes alllllll the way back to Thatboy and my early days/road trips.  We don't keep a lot of junk food in the house.  So on car trips, Thatboy indulges.  He always grabs a bag of doritos and a soda for the road.  Thatkid caught on, and now he gets his own "special snack" for car trips.  Which usually consists of fruit snacks and coconut water.   Thatbaby gets no special snacks, but I did pack plenty of snacks he could enjoy - like freeze dried fruit.  This actually worked to keep him happy and occupied for brief moments when the screaming abated.

The third arrow in distraction quiver was frequent stops.  We stopped just about every 3 hours.  This was helpful in terms of nursing and bathroom breaks, but also it gave everyone a chance to stretch their legs, play a little, and get out of the car. 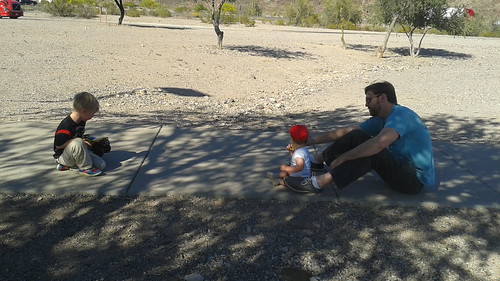 Would I consider the trick a success?  Well it was in the sense that we made it there, and back.  It wasn't terribly enjoyable, and I'm not looking forward to our roadtrip at the end of the month.  There was less screaming on the way home than on the way back.  Which is coincidentally when I decided to wear jeans instead of shorts in the car because my knees got torn up from turning so often to replace a pacifier/grab a toy/hand back a dried apple slice.

Plane travel was actually much easier than the roadtrip.  Which is what I expected at this age.  Mostly because it's over faster.

We did an early morning flight, which worked out well since Thatbaby slept for most of the plane trips.  We packed up the car the night before, so in the morning we just had to pile the boys in to the car.  We were "those people" with kids in pajamas in the airport, but I think we get a free pass for the next couple of years.

Following the motto of those with two children, we decided to divide and conquer.  Babywearing for the win, as we ditched the stroller and I wore Thatbaby through the airport, with his carseat on my back. 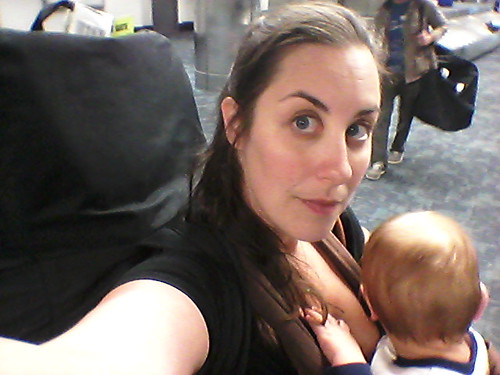 Thatboy took care of Thatkid and the other car seat.  And this is where I recommend The Trunki for kids.  Thatkid loaded it up with anything he wanted to play with on the trip and it became our only carry on (except for my diaper bag).  He can pull it through the airport himself, or, when he gets tired or we're in a rush, he can ride on it and be pulled. 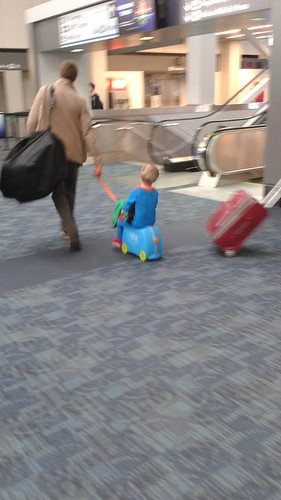 Ideally I like to get settled at the gate early, so we can check our carseats and grab a bite to eat for the plane.  This didn't happen on the way there, but it did on our way home.  Which meant Thatkid also got his signature smoothie (our answer to keeping his ears from popping on the plane.) 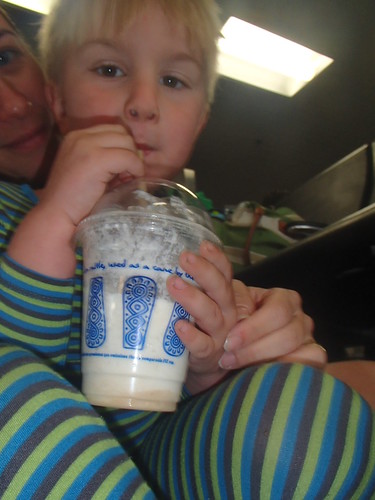 We're taking advantage of Thatbaby's lapchild status, because it's much easier to deal with him if he can be held.  Especially on short flights where he nurses during takeoff, falls asleep, and wakes up just in time for the descent.  Which also means we can all sit in the same row in our favorite seats.  Thatkid gets the window, Thatboy gets the aisle, I get the middle, and Thatbaby gets me. 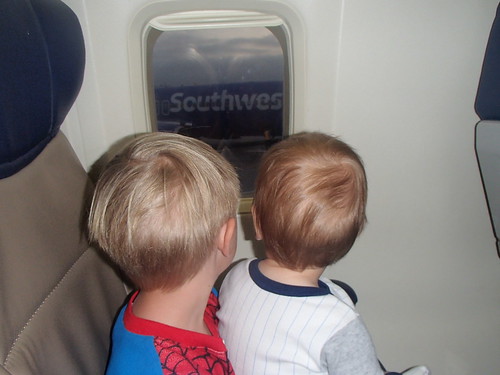 It's much easier to entertain a baby on your lap or beside you, versus one sitting behind you.  And as usual, we found that it's the simple things that kept Thatbaby entertained.  Like ice.  Or a plastic cup. 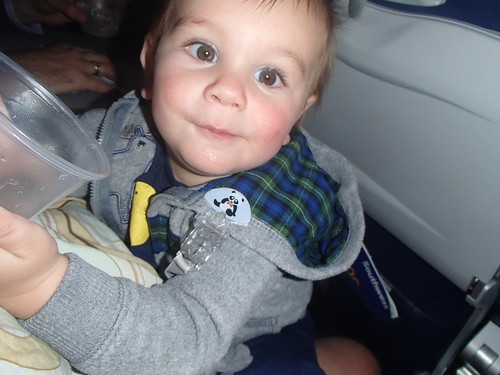 One thing I learned on our various trips is that traveling with an infant means that things are really unpredictable.  Both times we stayed in hotels with the same sleeping arrangement.  Rather than bring a pack and play, or hotel crib, we bedshare on trips.  When there were 3 of us, we all just slept in one, amazing king sized bed.  With 4 of us, we're back to that divide and conquer.  We get 2 doubles, and each of us take a boy.  You'll never guess who I get to sleep with. 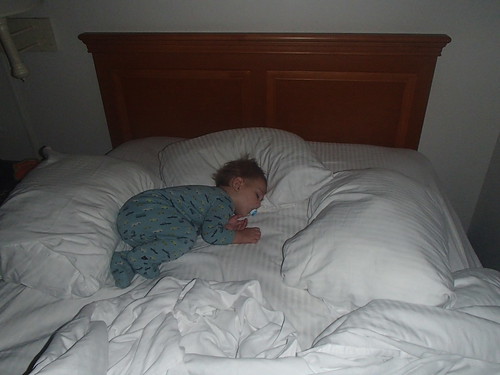 In Arizona Thatbaby was a mess.  It's a good thing we bedshared, because I could not get this kid to stay asleep.  This pictures captures the one moment I managed to sneak out to use the bathroom.  He woke up screaming while I was in there.

Conversely, over Easter we didn't have any of those issues and everyone slept pretty well.  Except for the fact that no one wanted to sleep in the morning, but that happens at home too.