Last weekend was both good and bad in terms of running.

Unlike my weekend in Arizona, this time I got to run inside, with water, in the hotel's fitness center.  Which was good.

I also decided to stay up a little late and get my run in after the boys went to sleep, so I didn't have to wake up early.  Which was also good.

When Thatkid was a baby this was how I got a lot of my runs in while training for a half-marathon.  I'd head to the gym after he went to sleep and knock out the miles.  I forgot how boring it is.

Once I started running last Saturday night, it all came crashing back.  I remembered playing games with my speed and incline - changing and varying them almost like a game, to keep it "interesting."

I actually got excited about running at night.  I figured I'd throw on a movie, or some trashy television and just zone out a bit.  It's been a while since I've gotten the chance to do that.  But the fitness center had no television, and the television on  the treadmill only had four channels.

I threw on "Steel Magnolias" and started my run. 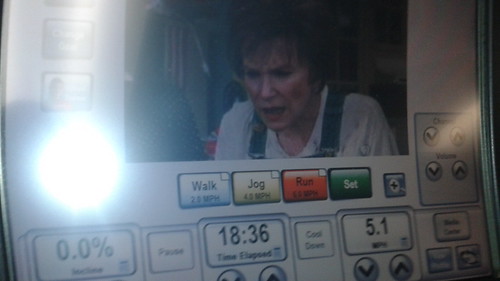 Steel Magnolias is a terrible movie to watch while you're on the treadmill.  I watched up until the "Halloween scene"  and decided that was it for me.  I switched over to Judge Judy for the next half hour.  Then watched a show about Shirley Maclaine.   All the while raising and lowering my speed.

I worked on some negative splits, since I can't seem to get those under my belt during races.  It's much easier to do that with a treadmill.  I even spent the last 2 minutes at an 8 minute mile - which isn't a goal of mine, but by then I was ready to be done!