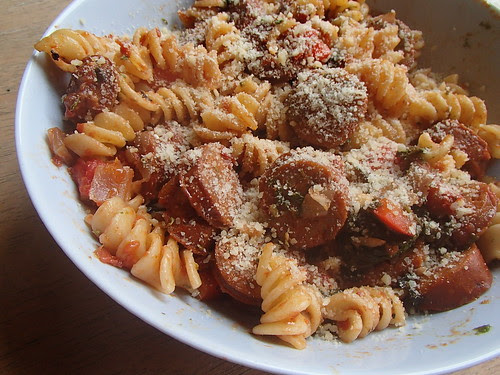 You know the saying "When it rains, it pours?"  Well it is pouring right now at work.  I've been putting in late nights for weeks, trying to prepare for multiple trials, motions, hearings.  As an example 2 weeks ago I had to go straight from one hearing to another - traveling across the county to get there.  Tomorrow should be even more exciting, as I have 2 court appearances at the same time, again, across the county.  Luckily my boss is taking over one of them for me, but depending on the results, things could get even uglier OR they could lighten up a bit.  I'm hoping for the latter.

Tonight, in anticipation that something good will come of tomorrow, we actually packed up relatively on time.  Thatboy still had to pick up Thatbaby from daycare since I wasn't going to make it again.  But I DID have time to make dinner!  Nothing complicated - we've been having some fairly boring meals lately, mostly due to my lack of creativity when I'm trying to make them late in the evening.  This one gets a spruce up from some leftover tomato sauce that I thought should get used up, and some chicken sausage which only needs to be heated up.  Which means, the longest aspect of this dish is boiling water and cooking the pasta.  While it cooks, you can get everything else ready, so that when the pasta is done, so is dinner! 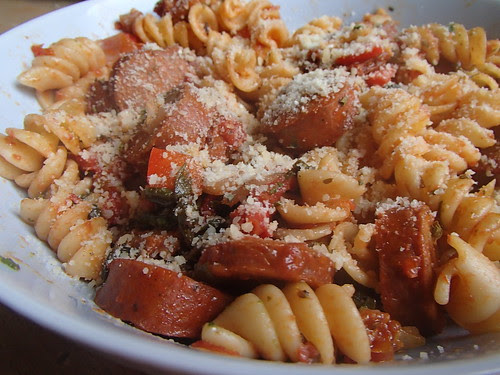