Mama's Taking Us To The Zoo Tomorrow

Thatboy and I are incredibly lucky in a lot of respects. When we first decided to expand our family we decided it would be ideal to have an October baby. And so that was what we tried to have. And we were obviously successful.

Even still, when I realized Thatbaby was due the first week of October there was a nagging thought in the back of my head - the zoo walk was usually the first weekend in October. We've been taking part in the zoo walk for years and it seemed pretty certain we'd be missing it this year. And even though I was excited about our upcoming addition, I was a little sad to be missing out on tradition. Besides, the zoo walk is my favorite way to see the zoo. It's not crowded, the animals are all up and active, and the weather is usually perfect.

As the months went on, I started getting notices about the walk and realized that for the first year it wasn't the first weekend in October - it was the third weekend! Meaning if I had Thatbaby the first week of October he'd be almost 2 weeks old by the time of the walk. I did a poll of my mommy friends who thought it wasn't unreasonable that I'd be able to do a 2.5 mile walk 2 weeks after giving birth. Even still, I waited to sign up until closer to the date.

I started out by saying how incredibly lucky I am. And that includes postpartum recovery. I've been up and at 'em since day 2 with little to no pain. Thatboy and I started going on 3 mile walks every afternoon by day 4. We took a roadtrip with Thatbaby up to the brit milah on day 8. So a 2.5 mile walk on day 13? Why not?

Earlier this week I signed us up and at 5:30 this morning I fed Thatbaby and we tucked him into the car for his first visit to the zoo. 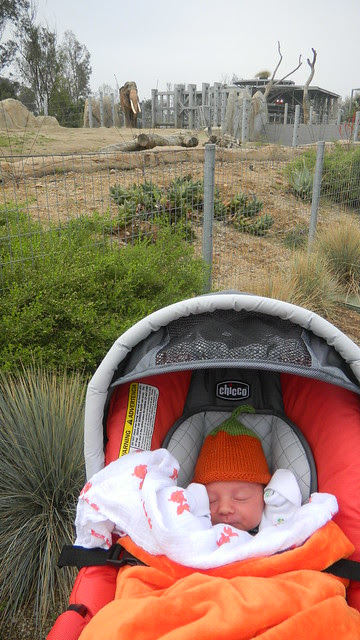 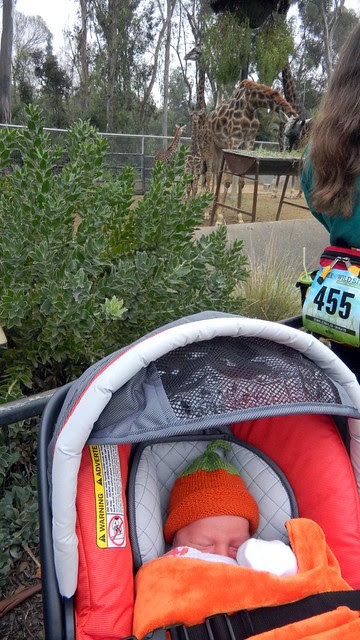 We decided to take pictures of him with various animals in the hopes we can turn it into a book for him later for bedtime readings. 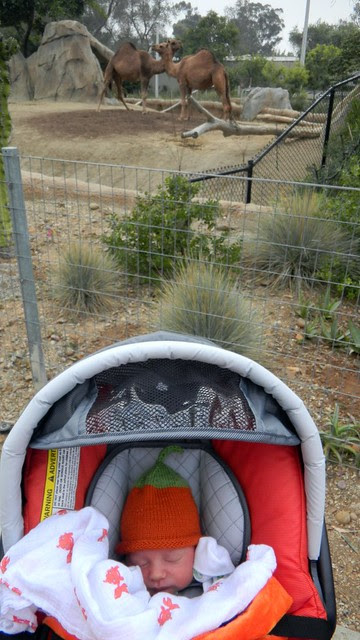 He especially liked the giant bear. 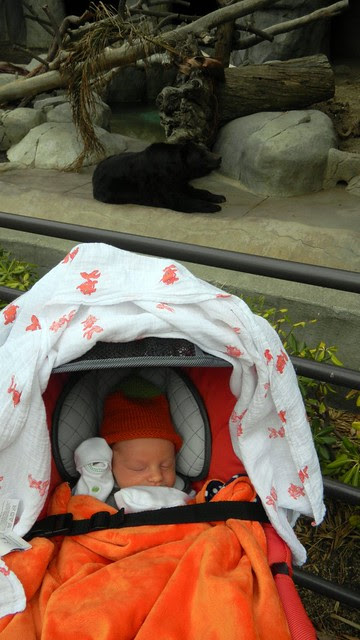 Thatbaby spent almost the entire walk asleep, which we figured would happen. He spends most of our walks asleep. Actually, he spends most of the days asleep. But I hear that's a thing at this age. 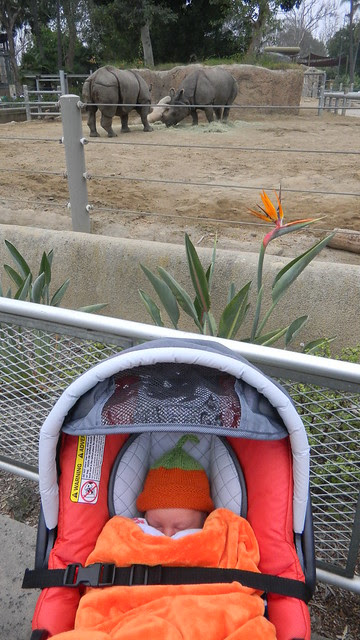 The animals were their usual active morning self. The meerkats were amazed by the stilt walkers, the elephants were getting pedicures. We got up close and personal with a llama and the giraffes were racing each other. All in all it was the perfect outing and I'm so glad we were able to take part!

Of course being up and out at that time of day when you're still waking the baby every 3 hours means you're pretty much shot for the rest of the day. Luckily I had three things in my favor: 1)We had a great night with Thatbaby last night. Meaning he went to bed when he was supposed to, woke up easily when I woke him for feedings, and went right back to sleep. Meaning I was able to get in a full 2 hours of sleep after every feeding.
2) Afternoon nap!
3) Dinner in the freezer.

A little tip if you're looking to freeze meals - don't forget the veggies! Or sides in general. I found one of the easiest ways to include veggies in my freezer meals is have them in a baked dish. Like the rice and peas I've got ready to go. Or in this case, scalloped cabbage. That way you can get it all prepped, and when you're ready to eat you can pop it, frozen and all, into the oven. Baking it means you don't end up with soggy, water laden veggies - even when you're dealing with fresh greens. The scalloped cabbage was Thatboy's favorite part of the meal, but take that with a grain of salt because he's REALLY not a ham fan. That part of the meal was completely for me! 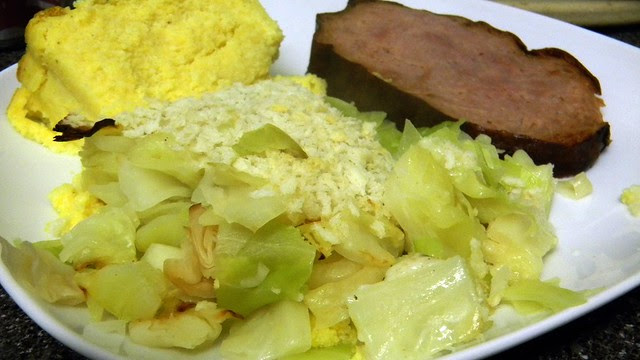