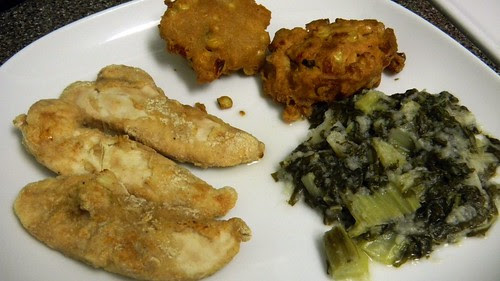 In his family vegetables were always boiled (usually until they were limp and flavorless) and then slopped on a plate. In my house they were sauteed in olive oil, tossed with butter, roasted, grilled, steamed, salt, peppered, and spiced.

It doesn't take a lot of skill or imagination to create great vegetable side dishes. Heck, it doesn't even take a lot of time. The first time I made Thatboy zucchini it was sauteed and seasoned with garlic, basil, salt and pepper and he looked at me as though I was practicing magic. And he was hooked.

My basic arsenal changes based on my mood. The time of the magic zucchini I was using basil and garlic on everything. There was another period where red pepper flakes were my go to seasoning. Lately it's been lemon and butter. Lemon to me always makes the veggies taste "bright" and "fresh."

When I served this swiss chard with dinner the other night Thatboy asked me what it was. When I told him it was chard he told me it reminded him of dessert. Which I thought was weird, because he is a person who insists dessert be sweet, and usually chocolatey. But apparently for him the lemon adds sweetness to this dish. However you look at it, thinking that a dark green leafy vegetable is dessert-like has to be a good thing. 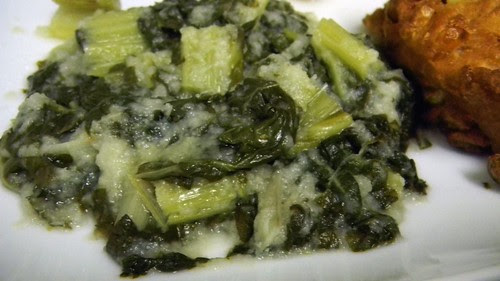 Swiss Chard
1 bunch of Swiss Chard
1 1/2 Tbsp flour
juice of half a lemon
1 Tbsp butter
salt
Posted by That Girl at 10:20 PM