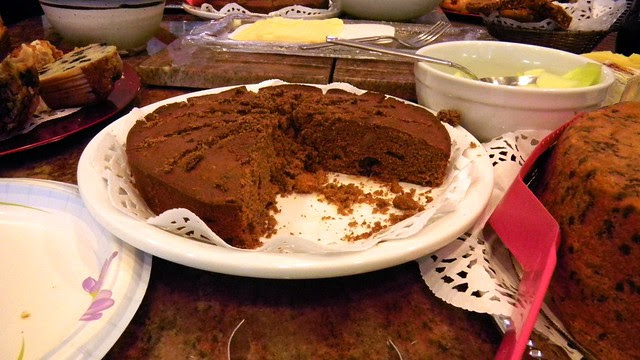 This is going to be a controversial post, so I promise there will be cake in the end. In fact, that was one of my incentives to get Thatbaby into the world. I promised him that if he came out, there would in fact be cake. Cake is an excellent motivator for just about anyone.

We knew from the very beginning that if Thatbaby was a boy, he was going to be circumcised. Many years ago, back when we were dating, I brought up the fact that it was very important to me to raise my children Jewish. It was a dealbreaker for me in a relationship. Thatboy, having his own issues with his Catholic upbringing, readily agreed. So it was a given that we begin Thatbaby's introduction to his heritage with the traditional brit milah. 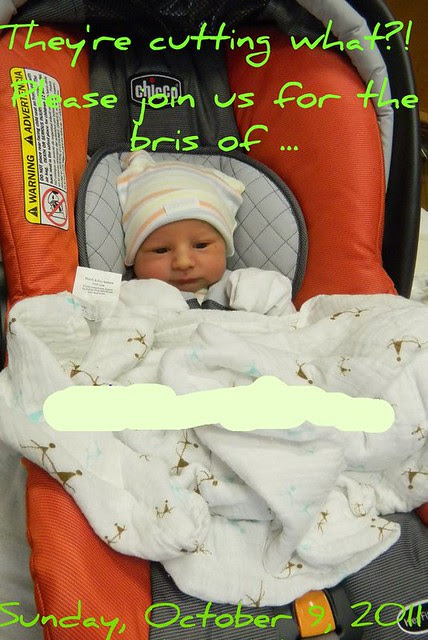 On Sunday, 8 days after his birth, friends and family from across the country joined us in celebrating this new life. The bris has three main parts - the baby naming, the circumcision, and like any good Jewish ceremony - the food. 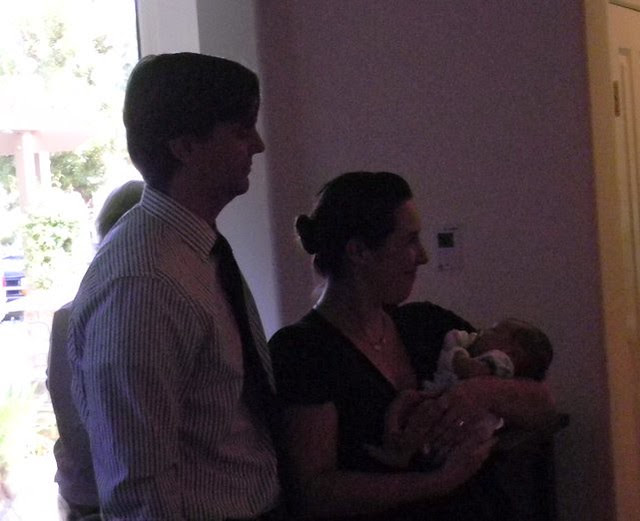 The Rabbi who married Thatboy and I performed the naming ceremony. He spoke of Thatdad, who shares a birth week with Thatbaby and a little bit more. We had decided to use Thatdad's Hebrew name as the Thatbaby's Hebrew name. Talking about Thatdad affected me as I expected it would - every moment of joy brings with it a feeling of loss. Of course that meant that the readings I performed were done through tears. 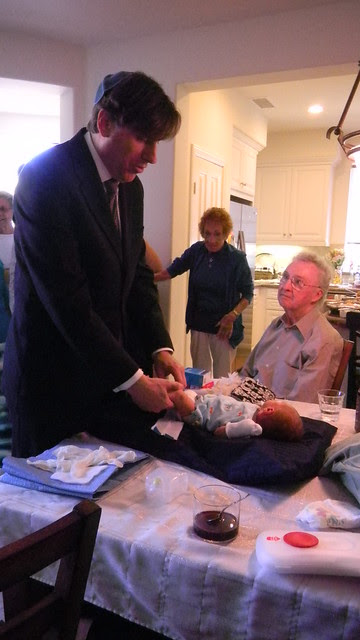 After the naming ceremony, the circumcision was performed by a Mohel. Our Rabbi recommended a couple in the area. We decided not to take chances with our little boy and went with the one who is also the Associate Director of Pediatric Urology at a prominent local hospital. (As an aside- we went in for a check up today and our pediatrician seems to think he did a good job. Thatboy is obviously concerned about loss of length, but I think that's probably a typical dad concern.) 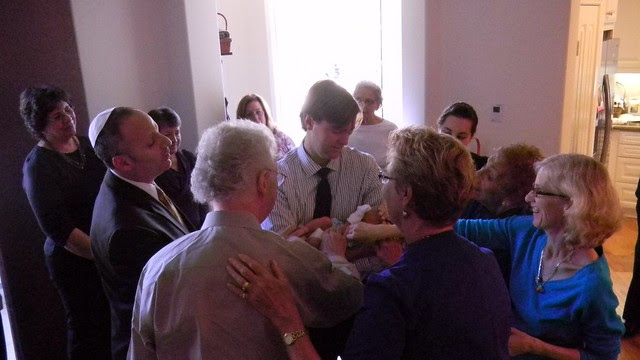 After the circumcision 3 generations surrounded Thatbaby for a blessing. Which has always been my favorite part of Friday night services. I honestly can't wait to be able to participate in that with Thatbaby.

And then there was eating. Loads of eating. You would think for a breakfast occasion there wouldn't be massive amounts of food, but then again, if you thought that, you probably have never met my family.

I already had made the challah, not expecting to use it quite so soon. But I wanted to do more. Especially since I had been banned from the kitchen since the birth of Thatbaby. And it was driving me crazy for several reasons.

First, because TFIL did most of the cooking. This was a multifold problem. I've already complained about his use of every pot/pan/plate/dish in the house in making meals - exacerbated by the fact that he has a "I cook, you clean" policy. Which means my kitchen was a disaster area every night. Add to that the fact he takes 3 hours to cook green beans and you can imagine how long they were here every night. And if that wasn't enough, he spent whatever time he wasn't cooking complaining about all the work he was having to do by cooking.

TMIL wasn't much better as she spent her time complaining about how bored they were during the day when they weren't over at our place making a mess. She was on cleaning duty and again I wasn't allowed to help. BUT she also refused to respect any of our wishes about where things belonged. This ranged from "Please don't put our good fragile wine glasses in the dishwasher" all the way to "Ummm I can't find where the plates are since they don't seem to be in the plate cupboard." Which meant every night after they left we had to unload the dishwasher and wash by hand everything we asked her not to put in, and then go searching through all our drawers and cupboards to find things and put them back where they belonged.

I decided to put my foot down toward the end of their stay and take back my kitchen. It started slowly - picking up first just an entree (the night of the three hour green beans), but by their last night they showed up just in time to have dinner placed on plates for them, with no cleanup to be done (because that's how it works in Thathouse.)

I also used some of my precious - noninlaw time to bake a cake for the bris. Since it was a morning affair I didn't want a layer cake, dripping with frosting. Nothing overly sweet. I figured a coffee-cake type cake would be the best way to go. Filled with dried fruit and nuts it's almost like a quick bread. Except for the use of cake flour which makes it light and fluffy.

The soaking of the raisins is a trick I picked up from my great grandmother who used to leave that step out whenever she gave anyone a recipe involving raisins. It was her own trick so that people would say "I made Zelda's raisin bread and it just didn't taste as good as when Zelda made it." She soaked her raisins in water, I used kirsch. Because I had it leftover from fondue night and chocolate and cherry combine together oh so well. I made this in a round, but it could easily be baked in loaf pans for the upcoming holidays. 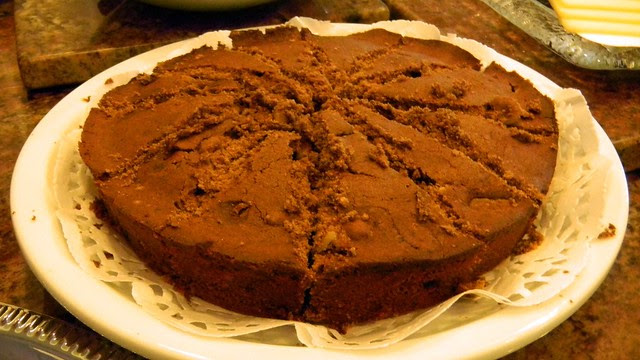 Chocolate Fruit and Nut Cake
1/3 cup golden raisins
2 Tbsp kirsch
2 oz unsweetened chocolate
1 stick butter
1 1/4 cup sugar
2 eggs
1 tsp vanilla
1 cup milk
2 cups cake flour
2 tsp baking powder
1/2 tsp salt
2 tsp cinnamon
1/3 cup dried cherries
1/2 cup chopped walnuts
1. Soak raisins in kirsch overnight.
2. Preheat oven to 350. Spray two round cake pans with baking spray. Melt the chocolate in a double boiler and let cool.
3. Cream the butter in an electric mixer and then slowly add in the sugar. Beat until light and fluffy.
4. Add eggs, one at a time, mixing completely before each addition.
5. Add in the chocolate, vanilla, and beat until thoroughly combined.
6. In a separate bowl, combine flour, baking powder, salt, and cinnamon. Alternate adding in these dry ingredients with the milk, starting and ending with the dry ingredients.
7. Stir in the raisins, along with the kirsch they've been soaking in, the cherries, and the walnuts.
8. Spread the batter into the pans and bake for 35 minutes. Cool in pans before turning out onto a cooling rack.
Posted by That Girl at 11:11 PM